The Daily Nexus
Sign of the Times
Trump Needs to Focus on Cutting the Deficit: An Analysis of the SOTU
February 11, 2018 at 7:00 pm by Rick Zierer 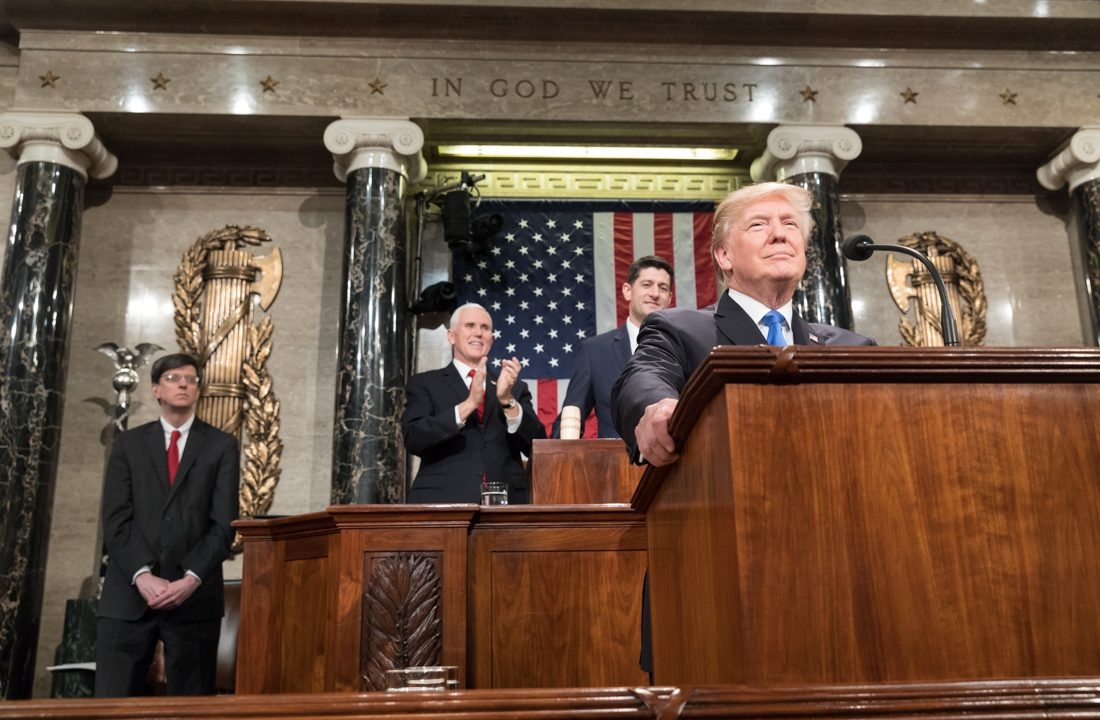 The State of the Union address given by President Trump this past week gave us an insight into this administration’s focus areas. President Trump touted his signature legislative achievement, the tax reform bill. He offered his vision of a compromise immigration bill, which would extend DACA in exchange for funding a border wall.

Most presidents use their State of the Union address as a way to highlight their legislative priorities for the coming year, and President Trump’s was no different. He highlighted the economy and immigration, but lacked focus on policy specifics, particularly when it came to addressing the national debt. It was an effective political speech for its purpose, however there are issues with the infrastructure bill and Trump needs to work more on cutting the deficit. Here are several key takeaways from President Trump’s State of the Union address.

On the matter of infrastructure the president proclaimed his desire for an enormous $1.5 trillion bill, decrying the red tape that often stalls and delays major projects. The president has previously floated the idea of purchasing Japanese high-speed trains for use in the United States, which would be a great deal faster than the fastest models currently in operation on U.S. lines. However, this would require massive amounts of funding and time, as existing train tracks are incapable of supporting such high speeds, and the train models in question would likely not be compatible with existing tracks.

Spending $1.5 trillion — even over a period of 10 years — would be reckless and fiscally irresponsible, especially with the current record levels of government and private debt.

One solution can be seen with Brightline,  the only private railway in the United States. Connecting various cities in the state of Florida, the railway is capable of a max speed of 125 mph and has been investing in upgrading its track to meet federal requirements for speeds in excess of 79 mph. The project has developed largely due to the business-friendly regulatory environment in Florida’s state and local governments, and it provides an interesting comparison with the California high speed rail that has been in development since being approved by voters in 2008. It is not projected for completion until 2029, while the Brightline, which has been in development since 2012, has already begun operating portions of the line.

President Trump should take a look at the different factors leading to these discrepancies and should consider whether the regulatory environment is stifling innovation. Spending $1.5 trillion — even over a period of 10 years — would be reckless and fiscally irresponsible, especially with the current record levels of government and private debt.

President Trump also took credit for the unprecedented economic growth that has occurred since he took office. While the economy had been expanding long before the president took office (and, it should be noted, it almost always does), it seems clear that the stock market, investment and job creation have all increased at least in part due to corporate anticipations of lower regulatory burdens and the tax cuts.

Indeed, one of the less publicized actions by the Trump administration has been its regulatory policy, which has been credited with reviving investor confidence in the U.S. and has contributed to the 2017 economic growth and record unemployment rates. It’s important to note that most presidents don’t deserve credit for the economy, given that their policies may not have immediate effects, but many companies have boosted worker pay and created new jobs after the tax bill, which some have cited as evidence that at least some of the benefits have trickled down.

President Trump has a chance to be successful, he just needs to focus more on fine-tuning the infrastructure bill and focus on reducing the deficit.

The national debt is one of the least interesting issues to most people, and many have become desensitized to its ridiculously high numbers. Even so, it is incredibly important, especially to young people. Many economists believe that years of unbalanced budgets lead to higher interest rates. Some prominent economists cite the debt increase as a result of the Bush Tax Cuts, the war in Iraq and the 2008 recession. They fear that increased debt could lead to another recession.

President Trump’s tax cuts have decreased a major source of tax revenue for the government. Budget deficits are cited as a major reason for lack of confidence in the U.S. economy abroad, and could erode the savings of young people with inflation. Inflation is when there are increased prices for goods, so the value of a dollar goes down over time. In-N-Out burgers used to cost 35 cents 50 years ago, but the cost of a burger didn’t skyrocket overnight; it is a gradual process of the value of a dollar shrinking every year. A major driver of this is when the federal government borrows or creates money to pay the interest on its debt.

The debt threatens to swallow up other priorities; in 2017, the federal government spent $276 billion just on making interest payments for the existing U.S. debt. This is money that we get literally nothing back for — no services, no military, no tangible benefit to the U.S. population.

These payments accounted for almost 7 percent of the federal budget. This is actually down from earlier years, such as the 1990s, when interest payments accounted for an even higher share of the budget. However, this is primarily because interest rates are being held low right now, which is greatly influenced by the low interest rates created by the Federal Reserve’s QE policy since the recession. If interest rates increase by a few points, these interest payments could easily balloon in size. If left unchecked, Social Security threatens to go bankrupt in 2037, it and would be unable to pay more than 76 percent of the scheduled benefits. Medicare also threatens to blow a major hole in the deficit, and it nearly doubled in size from 2006 to 2016.

President Trump ran on a platform of making no changes to Social Security and Medicare, but that is untenable. All areas of spending should be on the table for cuts, including defense spending. President Trump has a chance to be successful, he just needs to focus more on fine-tuning the infrastructure bill and focus on reducing the deficit. Our future depends on it.

Rick Zierer hopes that President Trump will reduce spending in several key areas for the sake of our nation’s well-being.

It’s always time to cut the deficit if it’s nor free stuff for minorities.