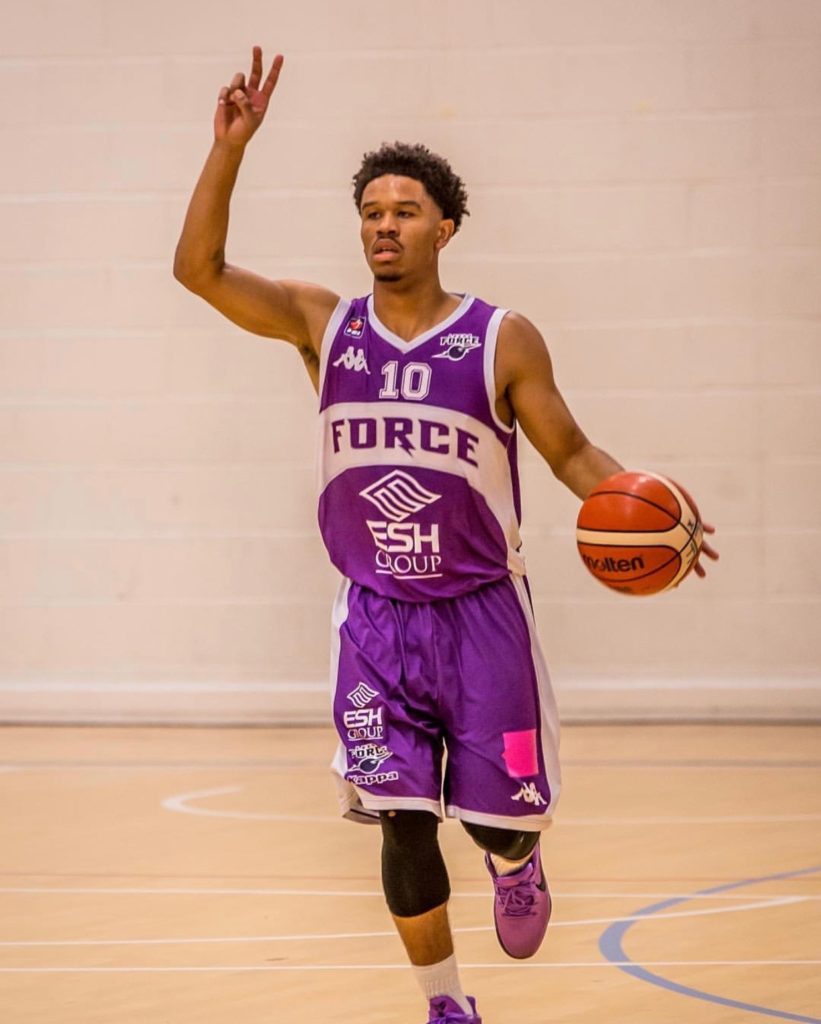 In recent weeks, I managed to catch up with former UCSB men’s basketball point guard Eric Childress. Childress, a Class of 2017 graduate, was the team’s only senior last season. The final chapter of his collegiate career wasn’t the happiest farewell as the Gauchos went a horrid 6-22, 4-12 in Big West play.

Since departing from UCSB, Childress has continued to play overseas. A native of Hawthorne, Calif., Childress is a long way from home. But his passion for basketball is the drive that keeps him motivated to continue to chase his dream of playing basketball.

Although I was unable to conduct an in-person interview with Childress due to his overseas travels, being able to complete this Q&A session with him was an experience in itself.

Before we begin here is the highlight tape of his first year overseas, enjoy:
Sean White: How was your experience playing in the British Basketball League? How was the transition from college to overseas?

Eric Childress: Playing in the British Basketball League was pretty difficult. I say this only because I feel like the club I was with had the potential to be very talented, but we underperformed and many different circumstances made it hard for us to reach our potential. The transition from college to overseas, I’d say, can be different for every person depending on the country you land in. For me, going to the U.K., I was very fortunate in going to a place where everyone spoke English and it was the most similar to the U.S. With that being said, if I were to start my career somewhere in Asia, South America or even here in Georgia I think I would have struggled at first because of the language barrier and it being such a big culture shock. It’s hard for me to just maneuver around town like I was in Leeds.

SW: Did you get in touch with any former Gauchos who play or have played overseas prior to starting your pro career?

EC: Yeah, prior to leaving I talked to players like James Nunally & Orlando Johnson, who came back to Santa Barbara during the summer, and kind of picked their brains about the whole overseas experience. Also, it’s easier for me to get in contact with Alan Williams, Nate Garth, Zalmico Harmon and Michael Bryson, so whenever I have a big question that I feel like I can’t really get on my own I’ll reach out and see if they can offer me some advice from their experiences.

SW: How did you know at the time that Leeds Force was the right fit for you? Did you have an agent help with that choice?

EC: I feel like you never really know which team is the right fit until you get there. You kind of watch film of the league and past seasons, but ultimately the guys you see from the last season are likely gone to another country or [have] signed with another team in the league. When I got to Leeds I had no clue what I was getting myself into. We had, of course, your local players for the team, and many imports, as they call us, from different places such as Houston and Florida in the States, then a player for Greece, one from Switzerland, one from Lithuania and one from Germany. So it’s more on the club to make sure our playing styles complement each other when they offer us to play for them. My choice to go play for Leeds was made by my agent and me. We felt like the U.K. was a good starting place for me to go because of the similarities to the U.S., and the British Basketball League (BBL) is a good league with many talented players.

SW: I see you’re no longer a member of Leeds Force? Was that by choice or was it a matter of both sides just not being able to agree?

EC: After giving Leeds a shot, the club and I both agreed that things weren’t going in the direction we hoped for and mutually decided to go our separate ways. I wish those guys the best over there for the rest of the year.

SW: You played with guys like Alan “Big Al” Williams, Michael Bryson and more. How often do you stay in touch with them? Do you ever seek advice from them for anything?

EC: One of the greatest things about UCSB — and I commend Coach Williams for this — was that he brought in some of the best dudes I’ll ever meet. With that being said, I speak to pretty much all my teammates from the past days because of the old group chats that we had in college and are still active in. As far as advice, I try to figure out some stuff on my own. If I can’t get it and [am] really struggling, then I’ll reach out to them or even old high school family such as my coaches and old teammates and see what advice they can offer me in this experience.

SW: Have you had a chance to peep this year’s men’s basketball team? If so, what have your thoughts been especially since the program now has a new head coach in Joe Pasternack?

EC: This year’s team has been amazing. I’m really happy for those guys that had to go through that tough season last year and [am] juiced for Gabe [Vincent] to be out there performing great after that injury last year. Glad to see Jalen [Canty] and Ami [Lakoju] out there on the floor after their situation last year as well. I can’t even lie: I was jealous, and I told them this when watching them play against Cal State Fullerton this year. Their play style differs so much from ours last year that it really seems like those dudes that are on the floor are genuinely having fun with the game, and I feel like the most important [thing] is having fun while competing at a high level. I’m happy they adjusted to Coach P’s system so quickly, and I think he did an outstanding job with those guys with getting them to compete on both ends of the floor.

SW: What’s next for Eric Childress? I see you’ve recently announced your signing with a team in the country of Georgia; what convinced you to do so?

EC: Yes, I recently signed to play and finish my rookie year here in Batumi, Georgia with BC Batumi. The biggest thing was that I didn’t want what happened in Leeds to affect my love for the game. I’ve been playing and giving my all to this sport for as long as I can remember, and it’s always been a dream of mine to be a professional basketball player. That was the biggest choice in deciding to come here and continue on. What also factored in was realizing that I get to travel the world, see many different places and cultures, try different things and gain new experiences that many people aren’t fortunate [enough] to do, so I’m blessed to even have this opportunity.

SW: Any good or unfamiliar meals overseas that you liked or disliked?

EC: As for as meals go, I’m one of the pickiest eaters you’ll ever meet. Shout-out to my mom and pops for teaching me how to cook. I feel like one day I’ll venture out and try something new, but if it doesn’t pass the smell test, I don’t think it’s for me.