The Daily Nexus
News
Cathy Murillo to be Next Santa Barbara Mayor with Support of Campus Democrats
November 12, 2017 at 2:40 pm by Simren Verma 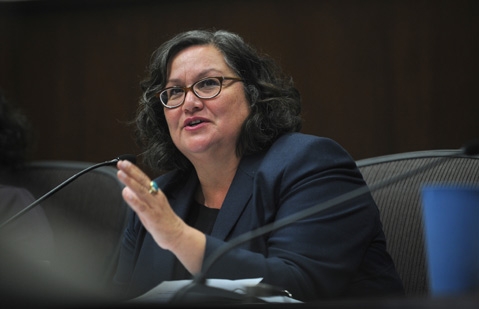 Santa Barbara residents voted for the new mayor on Tuesday, Nov. 7 and many UC Santa Barbara students joined in on the campaign efforts. The UCSB Campus Democrats endorsed Murillo and supported her campaign by contacting constituents through door-to-door canvassing and phone banking.

The results counted early Wednesday morning did not included mail-in ballots. The official election results, which will include mail-in ballots, are expected to be counted by Wednesday, Nov. 15.

Emily Murray, a second-year history of public policy major and president of the UCSB Campus Democrats, said the organization created an internship program for students to participate in canvassing and phone banking for at least six hours a week. Each week, they could also attend an hour-long seminar to learn more about political campaigns.

Brandt said Murillo is an advocate for many issues including environmental protections, policies against the gang injunction and affordable housing in Santa Barbara.

Brandt said affordable housing is a critical issue for UCSB students after graduation.

“UCSB students are graduating and finding that they can no longer live in the community,” he said. “This is becoming a generational issue, and it’s our generation that is getting left high and dry.”

While the Santa Barbara Democratic Party officially endorsed Cathy Murillo for mayor, the two remaining Democratic candidates, city council members Hal Conklin and Bendy White, did not drop out of the race.

Cathy Murillo was first elected to the city council in 2011, the first Latina ever elected, and she is now set to become Santa Barbara’s first ever Latina mayor.

Cathy Murillo is a UCSB alumni and former journalist for the Santa Barbara Independent, Los Angeles Times and Ventura County Star. Murillo also works on the Economic Vitality Team of Santa Barbara County and founded the Pro-Youth movement in Santa Barbara, which focuses on gang prevention.

While on city council, Murillo helped open a new Children’s Library, fought for environmental protections and worked with the Housing Task Force, a group that assesses the cost of housing and housing development.