The competition featured gelatos produced on-site with all fresh ingredients the day of. My VIP pass gave me a glimpse at the refrigeration truck where each competitor stored their ingredients, along with the tent where the gelatos were being made. Each gelato was both dairy and fat free, except for the festival’s sponsor WhyGelato.com, who was also the exception to the on-site rule. 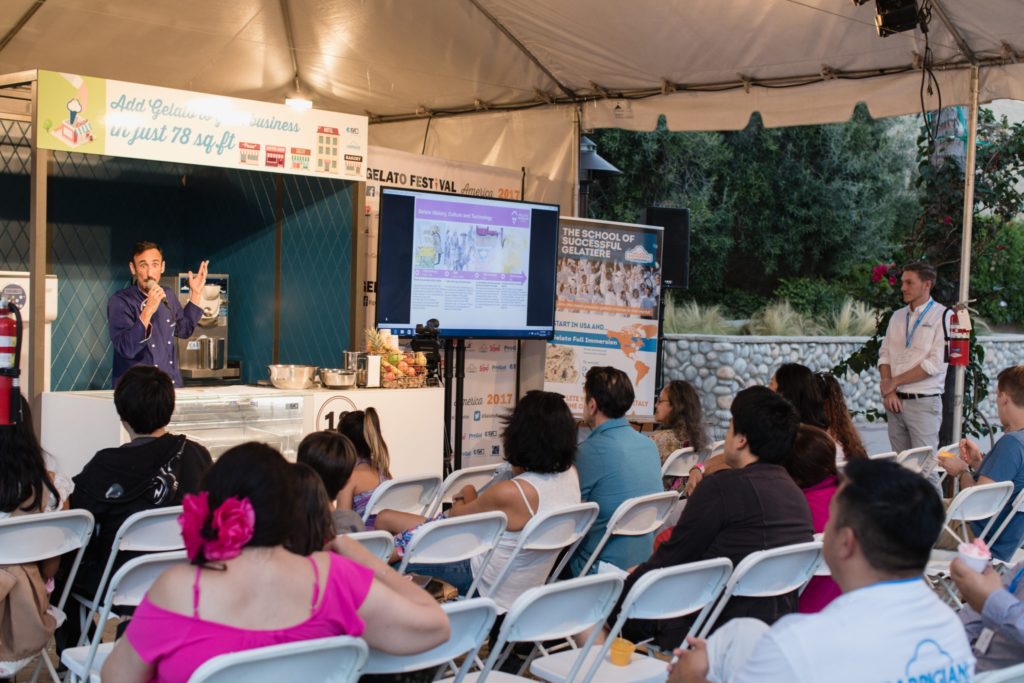 Classes on the history of gelato and gelato-making were taught at the festival. Zach Mendez/Daily Nexus

Besides the competition itself, the festival offered a demonstration by Carpigiano Gelato University on the differences between gelato and ice cream. While I didn’t take part in the demonstration, I interested to see that it ended with the instructor making and providing a recipe for strawberry sorbet. 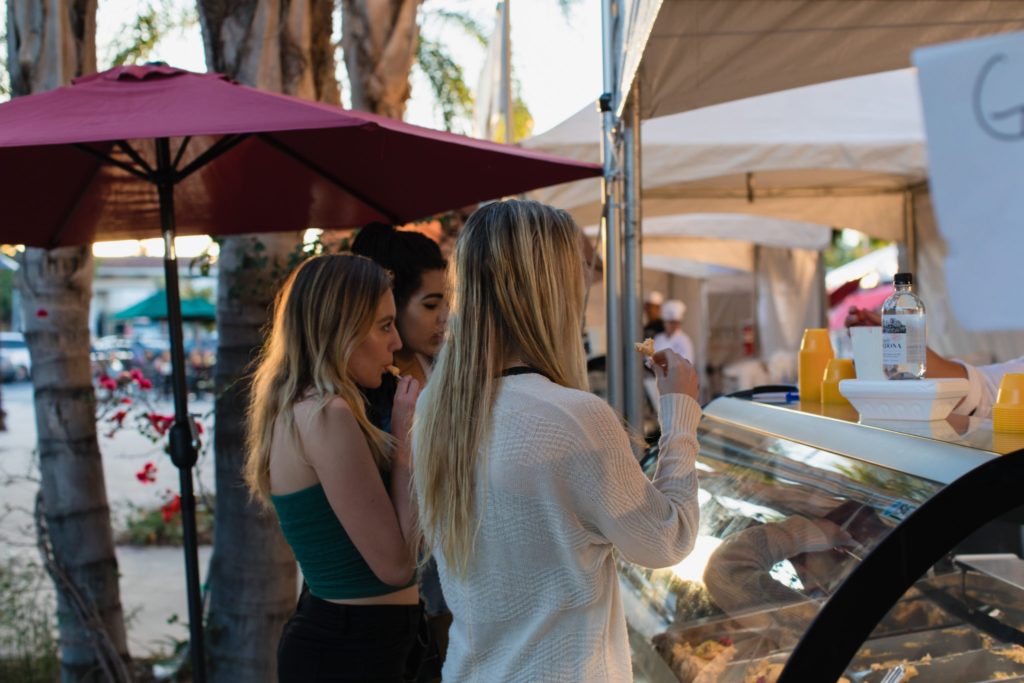 The first competitor of the day was Maurizio Melani’s Sicily Orange Sunshine, a gelato consisting of Sicilian oranges with fresh mint and cardamom. The gelato was smooth and creamy, delivering a very strong tart flavor. The mint was the star of the gelato, a fact made obvious by its aromatic presence.

Next to Maurizio was Mattia Ortelli’s Spicy Green Paradise, a gelato of fresh lime, mint, apple and ginger. While citrusy and good in theory, the gelato was heavily overpowered by the flavor of ginger.

In the next booth over was Spin Mlynarik’s Tropical Blast, a pineapple, cucumber, green apple, ginger and mint gelato. The gelato was firmer than the previous two and very refreshing, the cucumber standing out without overpowering the other ingredients. As the nice lady I sat with suggested, this gelato would make a great palette cleanser, and it just so happened to be one of my favorites. 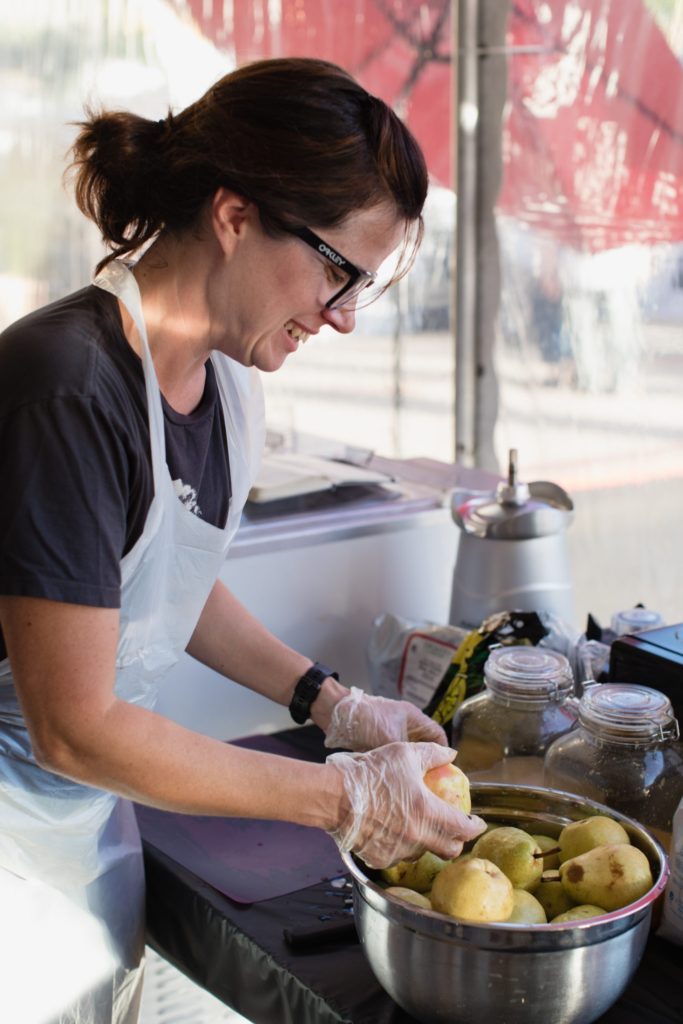 With Mlynarik was Noël Knecht with her Ode to Autumn gelato, consisting of cranberry, apple, pear and ginger. With subtle, complimentary tart and sweet flavors, the gelato lived up to its name, its flavor equivalent to the scent of an autumn candle. 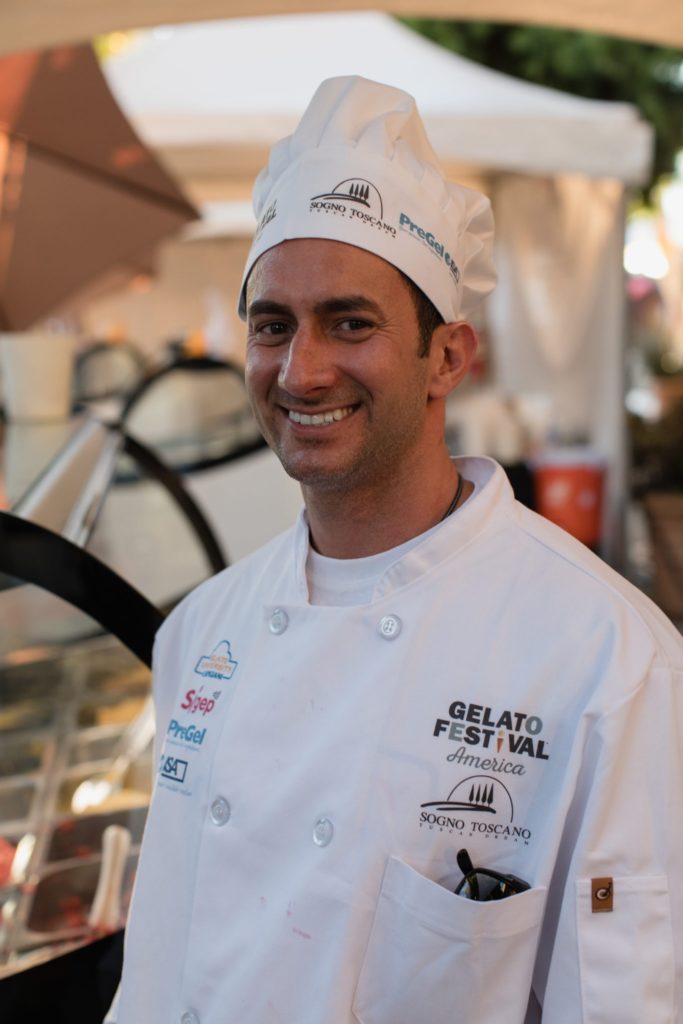 The fifth competitor was Marcello Mennone’s Maiz Dulce Borracho, a creamed corn gelato with brown sugar and cinnamon. The flavor was reminiscent of a corn tamale, the corn flavor subtle and instead highlighted by the sweetness of the other ingredients. 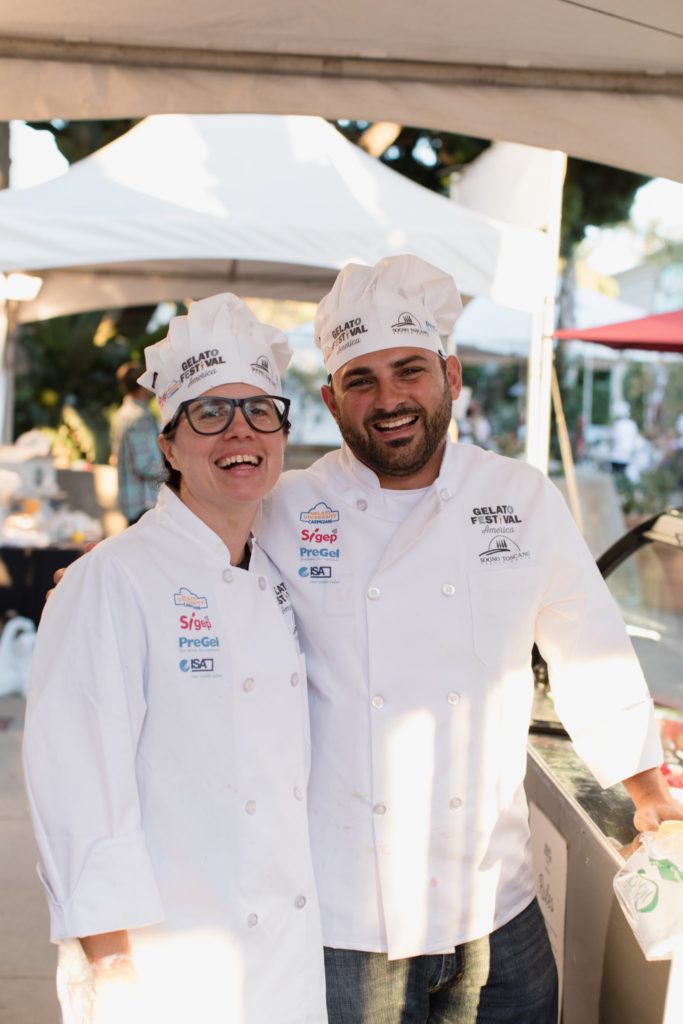 In the same booth was Bruno Couto de Matos’ Fresh Love, a gelato consisting of fresh oranges, carrots and beets. The gelato was very creamy, the flavors working very well to deliver a beet taste much sweeter than you would otherwise expect. Despite my usual aversion to beets, I found myself to be a fan of them in this gelato. 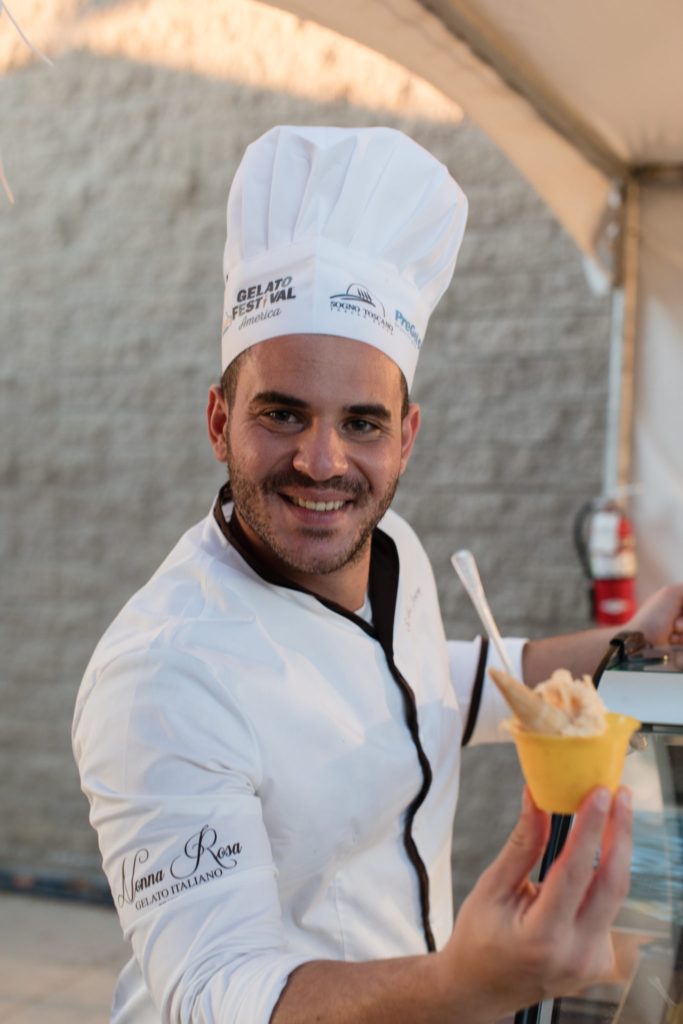 Salvatore Bonomo’s flavor, “Shade of Rose,” features peach and ginger. His shop is Nonna Rosa in LA. This Sicilian gained his inspiration from his grandmother’s original recipes. Zach Mendez/Daily Nexus

Moving on, I made my way to Salvatore Bonomo’s Shade of Rose, a gelato featuring pear and ginger with a Sicilian touch. The pear in it was almost subtle, not coming across as overly sweet as you’d expect. I was a big fan of this one, possibly because Bonomo offered me a nice surprise in the form of a small rose in my cup.  A for aesthetics. 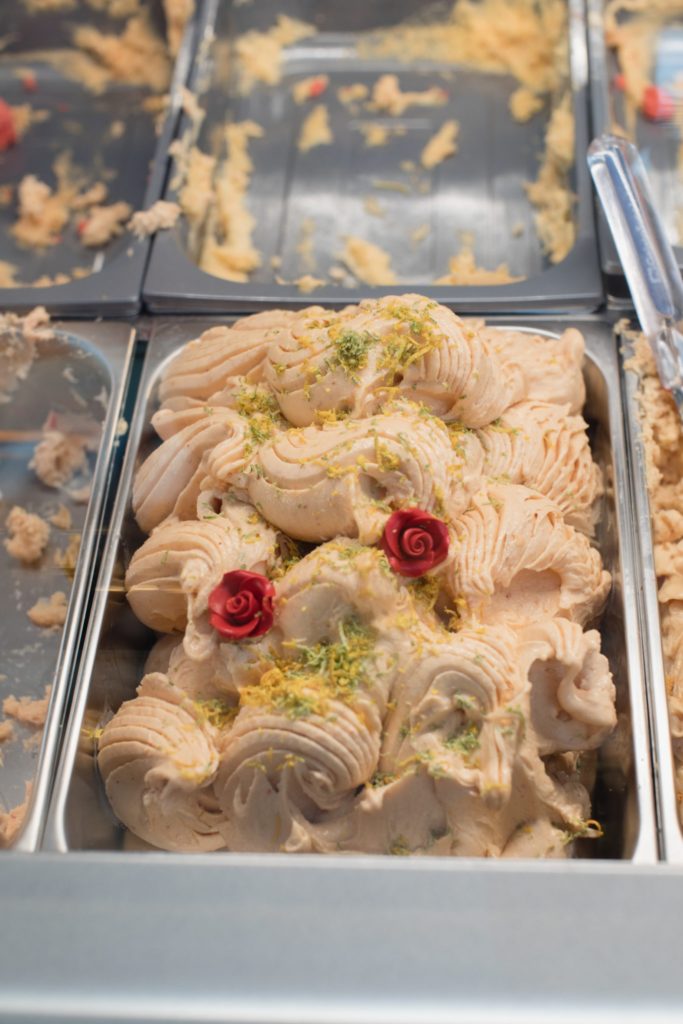 Salvatore Bonomo’s flavor, “Shade of Rose,” features peach and ginger. His shop is Nonna Rosa in LA. This Sicilian gained his inspiration from his grandmother’s original recipes. Zach Mendez/Daily Nexus

With Bonomo was Robert Sigona’s Blood Orange, an amazingly firm gelato of tart blood-red oranges, raspberry and lemon. The gelato was sweet as well as tart, all the flavors really working well together and showcasing nicely. The lemon especially accented everything else, making the gelato superbly refreshing. In case there was any doubt, this was my favorite of all the gelatos. 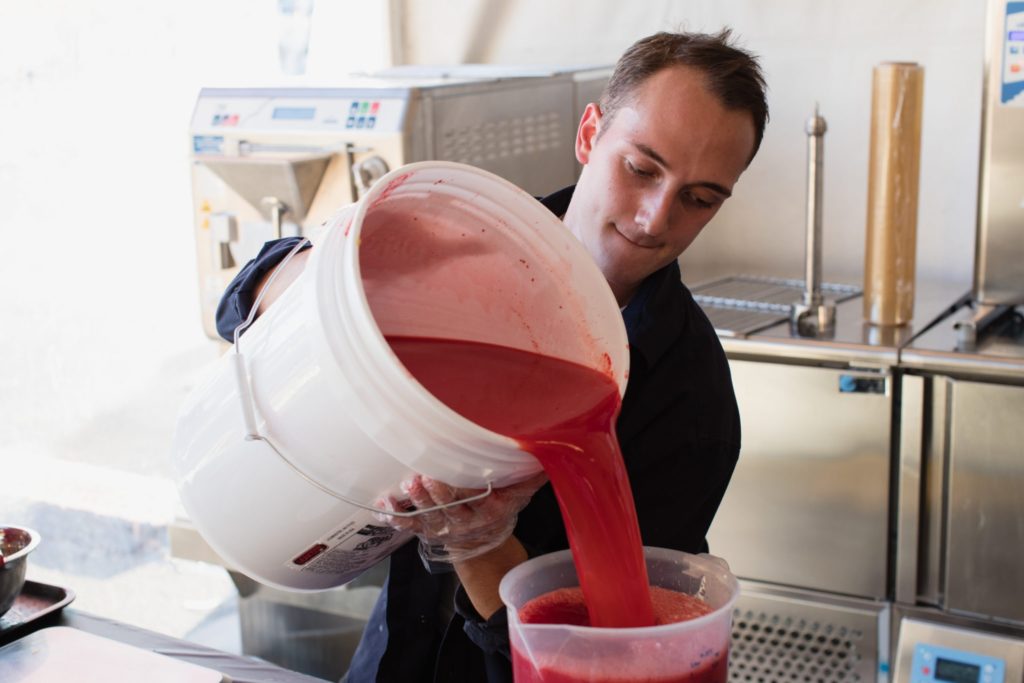 The ninth competitor was Michele Brown’s Mango Scented, a green tea and mango gelato with toasted rice and a hint of yuzu. Brown’s was the most unique in terms of flavor, the mango blending surprisingly well with green tea. 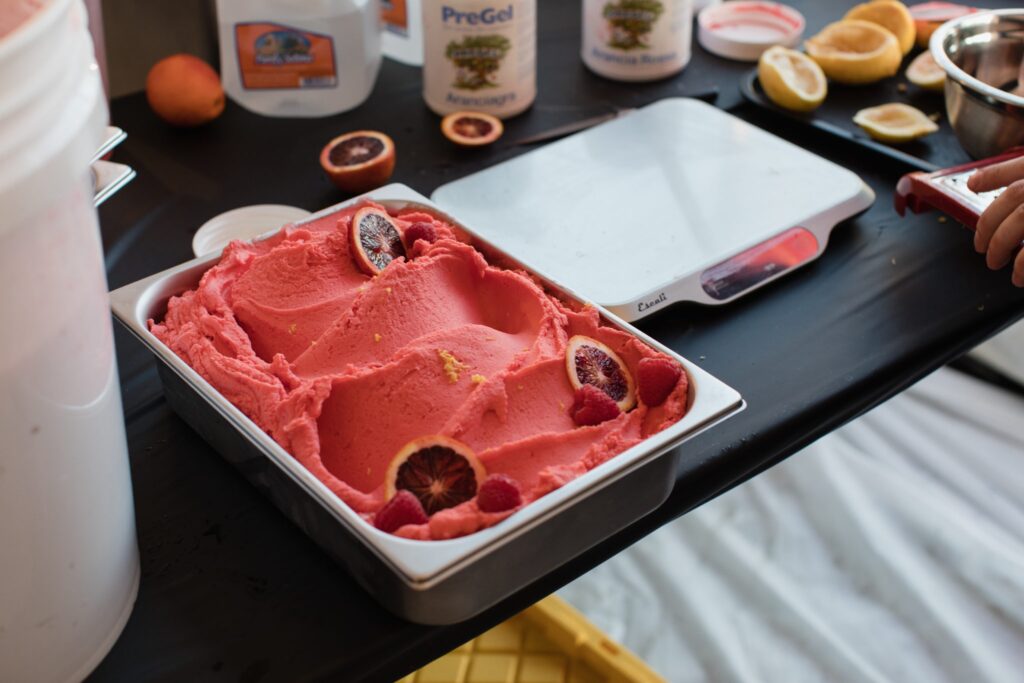 Rounding out the last of the competitors was Antonio Carrozza’s Vegan Pink Pear and Ginger, a gelato that, as the name suggests, consisted of pears and ginger topped with pink peppers. The gelato was slightly grainy in texture and extremely gingery. While beautiful in appearance, I was simply not a fan. 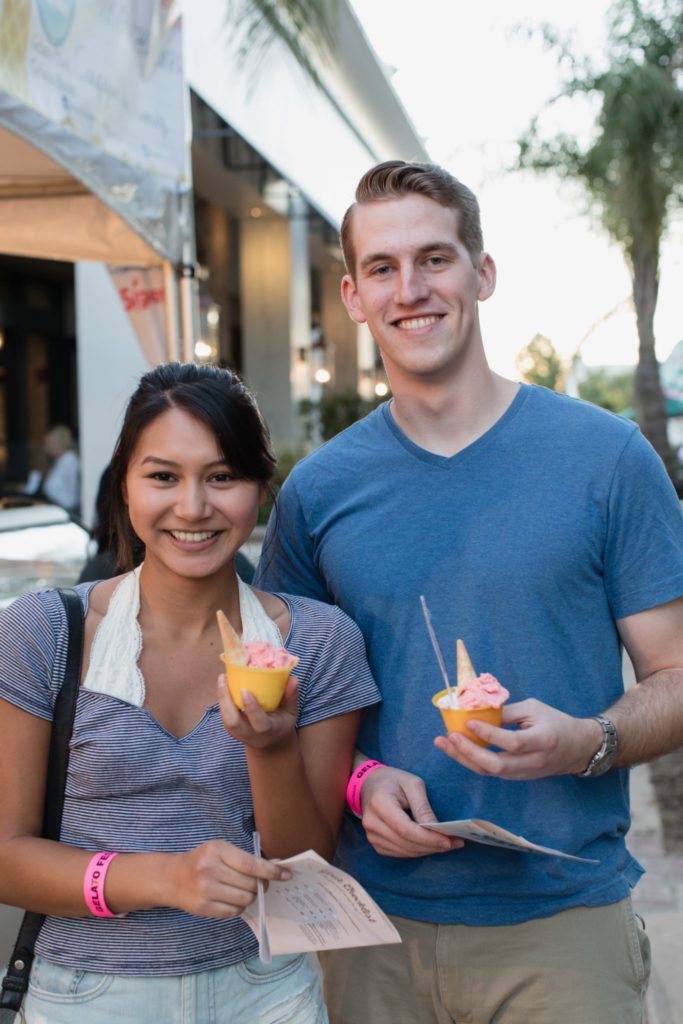 I ended my trip by trying out some of the sponsor’s gelato. The lack of participation in the competition portion of the festival meant they offered roughly 20 flavors rather than just the one. I opted for a mix of their chocolate and caffè latte flavors, which were very different from the fruity flavors I’d been tasting but no less amazing.

And the winner of the competition, chosen by popular vote, was Maurizio Melani’s Sicily Orange Sunshine!