Beginning with its worst start in Head Coach Nicole Lantagne Welch’s tenure, losing its first 10 matches prior to earning its first victory in its last contest against Eastern Kentucky, the UCSB women’s volleyball is hoping to improve with Big West conference play starting this weekend. 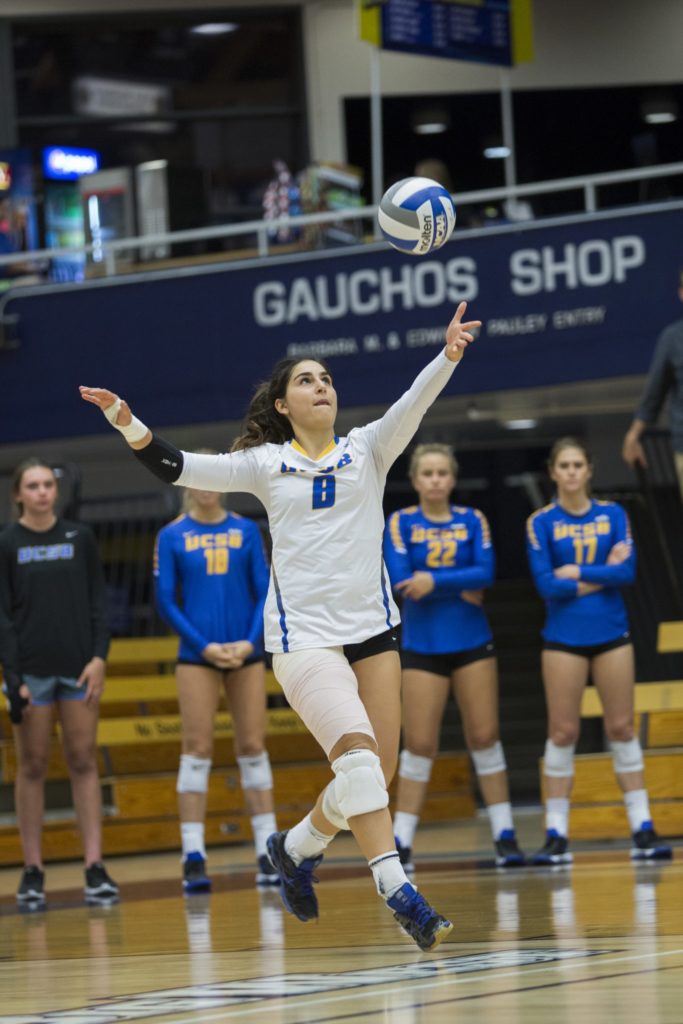 Wins were scarce during the non-conference portion of the Gauchos’ season as they enter the conference opening weekend at home against UC Riverside and Cal State Fullerton at 1-11. UCSB will face UCR Friday and CSFU Saturday.

Both of the Gauchos’ opponents had their conference openers Tuesday night and were defeated, making UCR 8-5 and CSUF 4-9. After opening with home matches, both programs will be on the road for eventual visits to the Thunderdome. Both teams have yet to win on the road and will seek to end three-match losing streaks.

Prior to Tuesday’s loss, it has been a promising start for UCR, who went 8-4 during non-conference play. The mark was their best finish to the non-conference schedule since the 2005 season in which they went 10-1.

Santa Barbara was swept in the regular season by UCR in 2016, yet managed to sweep the Titans in both meetings. UCSB hasn’t lost to Fullerton since Oct. 19, 2012.

Santa Barbara’s mix of experienced returners and newcomers has been the most evident culprit of the team’s inconsistencies of maintain leads, minimizing errors, and closing out matches.

But there’s no ceiling on the Gauchos’ potential as they continue to gel and establish familiarity on the court. Their last match was a sign of that as UCSB recorded a season-high .330 hitting clip and season-low 15 errors in its 3-1 win over Eastern Kentucky.

Although conference matches lie ahead, gradually paving her way toward becoming a possible Big West Player of the Year candidate after winning Freshman of the Year honors last season is sophomore Lindsey Ruddins. She finished with a season-high .415 hitting percentage in the win against EKU along with 20 kills.

Ruddins’ consistency at the outside hitter position has led to her becoming one of the nation’s top players. UCSB’s kills leader at 168, the Gauchos’ star player is second in the nation in attacks per set with a 14.09 average.

Her productivity matches her constant attacks as her 5.25 kills per set average also ranks second in the country. Topping off her placement in the national ranks is her 5.55 points per set average, which is sixth-best.

Despite Ruddins absence in the team’s 3-1 loss to Cleveland State the past weekend, making a positive statement was freshman middle blocker Nicole Omwanghe. She ended the tournament’s final two matches with a combined total of 22 kills and a .486 hitting percentage.

Omwanghe notched a career-high 13 kills to go along with a .435 hitting percentage against Cleveland St. and finished with nine kills and a .571 clip against Eastern Kentucky.

Sustaining such offensive success heading into Friday’s match against UCR will be no easy feat. The Highlanders are tied with Hawaii for the Big West lead in opponent hitting percentage at a .171 clip, which is greater than the Gauchos’ season average of .155.

Helping set the foundation to UCR’s stout defense is its ability to defend and earn digs. Riverside owns a conference-leading 17.51 digs per set average to also rank 19th in the nation.

Playing a factor in the Highlanders’ defensive success and making an immediate impact early in her career has been redshirt freshman libero Nicole Rodriguez. Having already earned Big West Defensive Player of the Week honors back in Aug. 20-27, Rodriguez was recently rewarded with conference Freshman of the Week honors for her strong performance at the Denver Invitational.

In three matches, she accumulated a team-high 46 digs and five aces while also tying her career-high of 23 digs in UCR’s 3-2 win over San Diego State. Rodriguez’ 4.39 digs per set and 180 (update after match) total digs rank fourth and seventh in the Big West, respectively.

As Rodriguez helps set the stage on defense, aiding the Highlanders on offense is junior setter Chelsea Doyle.

Doyle was named to the Denver Invitational All-Tournament team after tallying 101 assists on the weekend and 37 digs. Her 11.07 assists per set average ranks second in the Big West and 31st in the nation.

UCSB must find a way to be consistent when attacking on offense in order to have a chance against UCR’s defense.

Looking forward, UCSB is a little more evenly matched in its matchup against Cal State Fullerton. The Titans are one spot ahead of UCSB in hitting percentage at .158, but are stronger on defense as opponents average a .183 hitting clip.

Similar to UCR, Cal State Fullerton makes it difficult for opposing teams to establish an efficient attack due to their defensive prowess, specifically their success at digs.

Fullerton lands at No. 3 in the Big West in digs per set with a 15.92 average. However, the Gauchos rank just one spot below the Titans at 15.59 digs per set, setting the stage for a likely defensive battle that each team will look to turn digs, blocks, and opponent errors into points.

UCSB’s conference opening weekend will begin with UC Riverside this Fri., Sept. 22 at 7 p.m. and will continue Saturday versus Cal State Fullerton Saturday, Sept. 23 at 7 p.m. Both matches will be played at the Thunderdome.