The Daily Nexus
Nexustentialism
It's satire, stupid.
Two of My Bitches were in the Club; Thankfully Didn’t Know About Each Other
September 12, 2017 at 4:20 am by Candace Dunkin 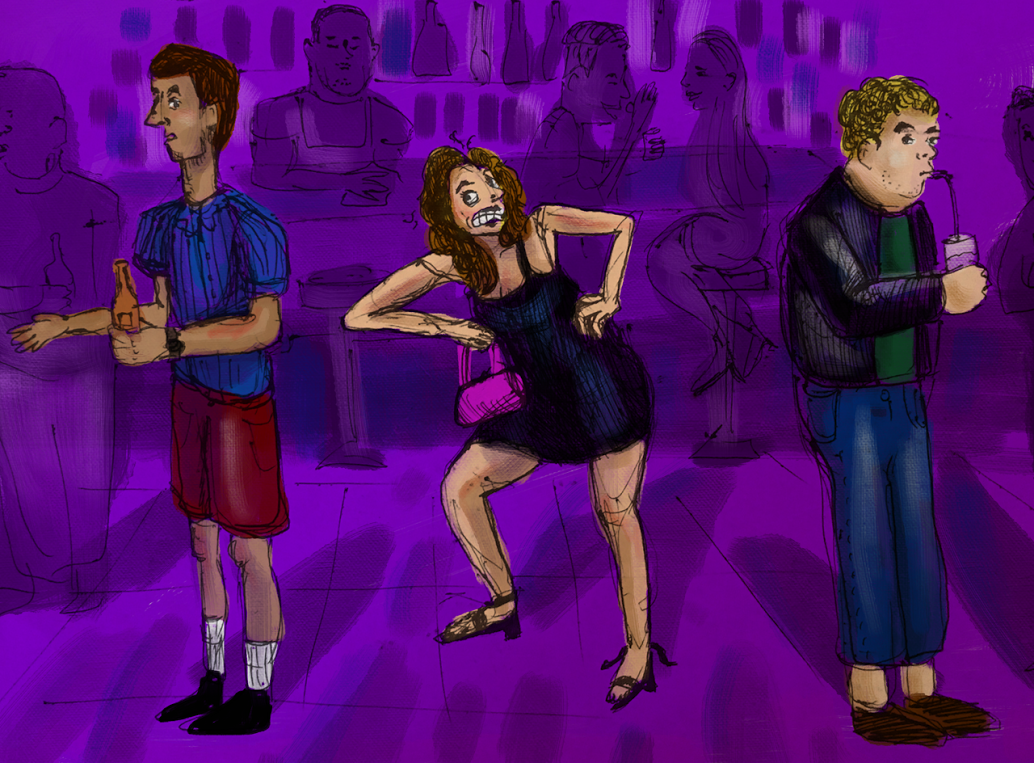 Tragedy struck Santa Barbara in the late hours of Saturday night as I stumbled my way out of the back of Sharkeez’s bathroom. It was a peaceful evening, filled with table dancing, fish bowls, and the occasional Mariah Carey banger. I was finishing puking and rallying after my third fish bowl in one of the stalls when the worst thing that has ever happened to anyone on the face of the planet, maybe in the whole entire universe (yes, don’t even ask, I’m including the people who got assigned to monitor Trump’s twitter tantrums), happened to me. As the eloquent rapper, Ty Dolla $ign, proclaimed, “I see two of my bitches in the club.” Since this experience is too traumatic to put into narrative form, I will depict my horror minute by minute:

I stumble my way out of the bathroom, wiping what I think is throw-up out of my hair.

I stop in the hallway back onto the dance floor to flirt with the really hot security officer. I cock my hip out and give him my best pick-up line: come here often?

In the process of flipping my hair out of my face to look both mysterious and sexy, I lock eyes with Side Hoe #1: the “nice” frat guy who I use for attention and weed. I throw him a wink and continue my process of making Mr. Security Guard my Side Hoe #6: Daddy.

After five minutes of absolutely crashing and burning with Head Hauncho (who am I kidding, I TOTALLY denied him), I turn to sashay away when I lock eyes with Side Hoe #4: Idiot Boy with Unusually Good D**ck and Weed, who, as you can guess, I use for d**k and weed.

He waves, and I immediately start hyperventilating as two of my bitches are TWO FEET AWAY FROM EACH OTHER. Not ha-ha, I casually just ran into them twenty minutes apart on campus or ha-ha, they JUST missed each other when one was leaving my house and the other was coming in. They were in the same building, under the same strobe light, basically holding hands in a non-homo, totally straight manner.

Side note: Much unlike Ty Dolla $ign’s predicament, my side hoes are from two completely different social calibers, and one is of higher ranking, thus they had no recognition of each other.

I turn to run into the bathroom to hide out until I’m thirty-five, somehow happily married, and six months pregnant, so they would want nothing to do with my lumpy, monogamous ass. As fate would have it, three girls pushed me out of the line since I apparently “ruined their Jimmy Cho’s” after vomiting on them. SOOOOOO wasn’t me, but whatever. And honestly, who the eff wears those shoes anymore.

Both of my side hoes see me standing frantically in the hallway and start to MAKE MOVES TOWARDS ME. Without hesitating, I turn and run into the boy’s bathroom.

There, standing at the urinal, was the most chiseled, tannest god I have ever seen. It was as if the Gods understood my dilemma and dropped the most perfect scapegoat in my lap, just so I could turn around and sit on his.

I gave him the most perfect smize I could muster, one that would convince Tyra Banks to name me “America’s Next Top Model” without being 6’1” and 120 pounds, and walk daintily into the nearest stall.

I crawl out of the boy’s bathroom after two complete hours of bliss. Both of my side hoes are gone, and Side Hoe #6: Hercules scoops me up and buys me a fish bowl.

As they say, don’t hate the player, hate the game and to study Greek Mythology/Gods, and their bodies, in college.

Candace Dunkin was voted most likely to complain to her side hoe about being a side hoe, and her boss is not wrong.

wow this is the funniest thing i’ve read in a really long time!! so relatable