The UCSB women’s volleyball team remains winless at 0-3 after opening its season on the road in the Baylor Tournament. The Gauchos are off to their second worst start in the Lantagne Welch era since the 2014-15 season in which they lost their first four-straight matches. 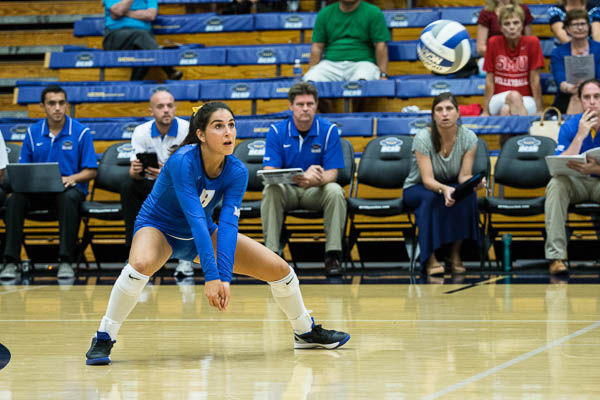 Emilia Petrachi shifts her weight in preparation for a hard outside hit straight to her. Eric Swenson/Daily Nexus

It was a disappointing start to the 2017-18 campaign as Santa Barbara was swept in two of its three matches, beginning the tournament with a 3-0 loss to Illinois State (1-2) and ending with identical results against host Baylor (2-1). It lost to No. 15 Florida St. (3-0) by a narrow 3-2 margin.

UCSB experienced inconsistencies on the offensive end in both matches as it ended with a combined .0135 hitting average, concluding with a .036 hitting percentage against Illinois St. and -.009 against the Bears. Still, it was an impressive opening weekend on defense for junior libero Emilia Petrachi as she wrapped up the three-day tourney with 54 kills and a 4.91 digs per set average.

Three of UCSB’s four freshmen – middle blockers Nicole Omwanghe, Kija Rivers, and Amanda Serex – played in the team’s season-opening match. Experimentation with the rotation continued as senior libero Sydney Bast made her debut as an outside hitter while facing Baylor. The Gauchos’ co-captain finished with a team-high nine kills.

A five-set battle between the Gauchos and Seminoles was UCSB’s best showing before falling short of an upset victory. Despite the team’s loss, the career-topping performances of redshirt sophomore and true sophomore outside hitters Ashley Ruddins and Chloe Allen were amazing to witness as a fan of either team.

Now a starter to begin the year after a fairly quite freshman season, Allen has capitalized on her increased playing time and was valuable in the Gauchos’ ability to keep the score close against the Seminoles. She notched a new career-high of 24 kills.

Along with being the only Gauchos to record double figures in kills, both Ruddins and Allen ended the match with double-doubles with 18 and 15 digs, respectively.

Constant back-and-forth scoring summed up the first two sets of the Gaucho-Seminole matchup. While tied 9-9, Florida St. embarked on an 8-2 run that would shift the momentum and give it some breathing room to eventually close out the opening set as it held a 17-11 lead and maintained it for a 25-22 set victory to go up 1-0. Providing two kills during the scoring stretch was senior outside hitter Milica Kubura, who tallied a total of 14 kills.

But the Seminoles advantage would be short lived as the Gauchos won the next two sets of the match. Ruddins and Allen set the foundation to UCSB’s pair of .240+ hitting periods, while Florida St. recorded a team-high seven errors in the third set. A service error by Kubura and an attack error by junior setter Brianne Burket in the match’s third set secured Santa Barbara’s 2-1 lead.

Jumping out to a 6-1 lead to begin the fourth set, forcing an FSU timeout, it seemed as if the Gauchos were on their way to one of their biggest triumphs in seasons. Aside from Ruddins and Allen, contributing to the streak as well was Rivers, who had eight kills in the match.

It wasn’t until a block by both Kubura and freshman middle Deja Williams that the Seminoles earned their first lead 12-11 of the fourth set. They would trail one last time 17-16 before stringing together an 8-2 run to win 25-18 and tie the match 2-2.

Scoring three of the Seminoles’ final five points was senior outside hitter Natasha Calkins. While Kubura set the precedent for FSU’s starting rotation, Calkins emerged as the match’s difference maker off the bench. She recorded a team and career-high of 17 kills.

The final set went down to the wire as neither team could take command over the other as ties reoccurred, leading to one last 13-13 stalemate.

Although Ruddins and Allen continued their consistency, their efforts wouldn’t be enough for a UCSB victory. Emerging late for FSU was Calkins for the Seminoles final two kills of the set before an error by the Gauchos’ Allen handed FSU a 15-13 set victory and 3-2 win.

UCSB will search for its first victory of the season at the Utah State Tournament, which is set to take place Sept. 1-2. The Gauchos will face Montana St., Pacific, and host Utah St.