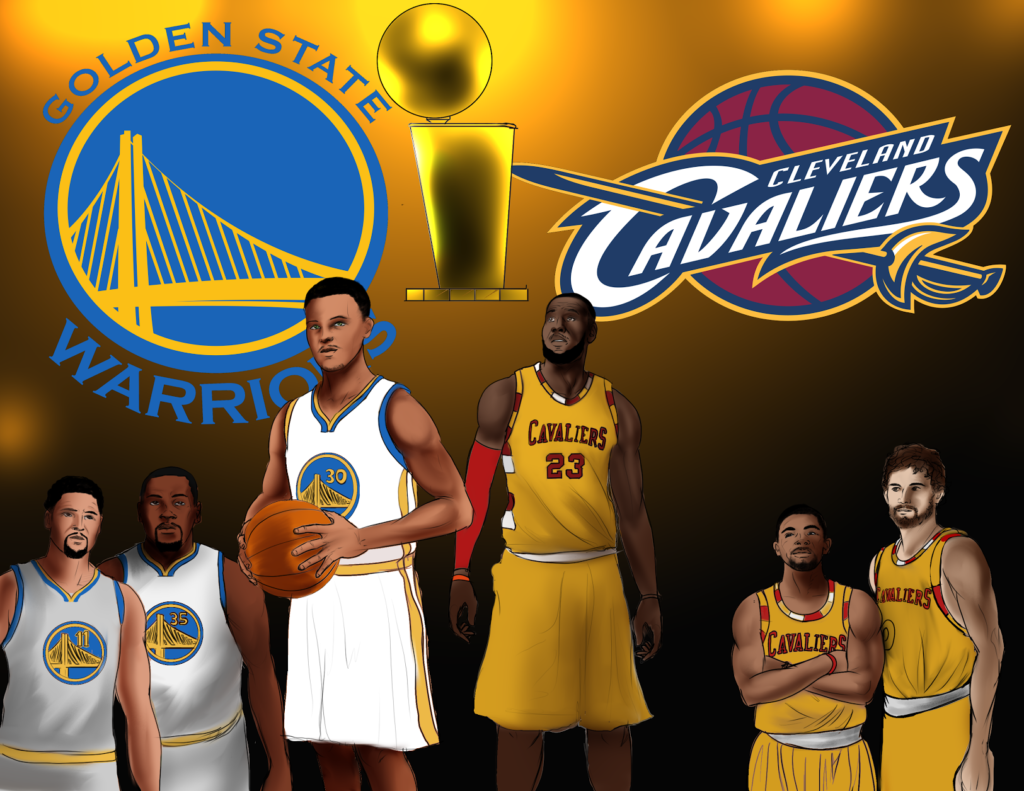 Does LeBron James Have Another Level He Can Gauge In Order to Repeat? – Sean White

These are the most frequent player comparisons named within the cohort of NBA legends that Cleveland Cavaliers’ star player LeBron James has recently been compared to.

It all revolves around a question: Is James on the path to being the greatest to ever play the game? At this moment, nobody has that answer. Even if we did, the array of differing opinions of fans from various generations of basketball would remain in disagreement.

Although many were ready to dethrone The King following Stephen Curry’s repeat as the NBA’s MVP, last year’s NBA Finals was just another reminder that James remains the league’s best player.

According to “For the Win’s” Charles Curtis, the Cavs have a 31.25 percent chance to win the 2017 NBA Finals. Quite honestly, this is not surprising as the Golden State Warriors did vastly improve with the addition of Kevin Durant this offseason.

But not so fast Warriors fans, you’re in for yet another rude awakening.

As the Warriors improved, so did the Cavaliers.

Certainly, the additions of Deron Williams and Kyle Korver have made the Cavs a better team in areas such as bench production and three-point shooting, but the defending NBA champion’s improvement boils down to one factor: LeBron has gotten better … something we all figured was impossible.

Currently, in his 14th season, we may be witnessing the best version of “playoff LeBron” ever.

James has simply dominated during this year’s postseason, averaging his second-best playoff career scoring average of 32.5 points per game and boasting incredible career highs in both two-point percentage and three-point percentage at 62.3 and 42.1 percent, respectively.

But the stats simply don’t fully capture the havoc James has wreaked upon opponents this postseason. Whether it be him spinning the ball in his hands as if practicing his free-throw routine before splashing a three-ball, throwing down his signature cock-back dunk or completing a chase down block (excuse me while I queue last year’s game-saving chase down block of Andre Iguodala’s layup in Game 7), James is doing what he wants and nobody can stop him.

Claims of unreached levels in his game have most fans such as myself on edge in anticipation of what LeBron could have up his sleeve next?

Whether it was the flu bug or simply a bad shooting night that was responsible for James’s underwhelming 11 points, 4-of-13 shooting performance in the team’s Game 3 Eastern Conference Finals loss to the Boston Celtics, it was necessary.

The Cavs entered the postseason facing adversity, having ended the regular season 12-15 following the All-Star break in addition to entering the playoffs on a four-game losing streak, and they seem to thrive when the pressure is approaching its highest point.

A lopsided 33-point, 135-102 Game 5 victory over Boston was Cleveland’s response to naysayers that predicted a possible Cavs letdown. More importantly, it was a reminder of the standard the Cavaliers must set and maintain in its series against Golden State.

Despite achieving the impossible last season after leading his team from being down 3-1 for a series win and Cleveland’s first ever NBA Championship, James must find a way to avoid another slow series start.

While nothing can guarantee victory, James must average at least 30 points per game.

Surely, the Cavs haven’t forgotten about being routed in the first two games of last season’s NBA Finals. It is likely these losses have been most prominent in the mind of James, who went 9-of-21 from the field for 23 points in Game 1 and 7-of-17 for 19 points in Game 2, combining for a +/- total of -29 over the span of the opening contests.

Despite the odds in Las Vegas going against the Cavs, the odds of LeBron managing to avoid such a bad start is very plausible considering that he has scored 30-plus points in 10 of 12 playoff games this postseason.

As expected, when James is better, everyone else is better. Overall, the Cavs flourished through three playoff rounds, specifically on the offensive end. Via NBA.com’s John Schuhmann, Cleveland’s postseason mark of 120.7 points per 100 possessions is the highest postseason average since the league began recording turnovers in 1977.

Aiding James is the remaining two-thirds of the Cavs’ Big 3 in Kyrie Irving and Kevin Love. By now, if you’re not aware of the damage Irving can cause he’ll certainly remind you this NBA Finals series after showing his ability to carry the team when James has a slow start with his career-high 42 points in Game 4 against the Celtics.

Love is inevitably having his best playoff run as a Cavalier, averaging playoff career-highs across the board in points (17.2), rebounds (10.4), 3-PT percentage (47.5) and FG percentage (45.7). He seems to be all in on himself, playing his most confident basketball which the Cavaliers will need in order to keep up with Golden State’s rapid, inside and out-scoring offense.

Once again, it’s going to take everything within the Cavs to stop the loaded roster the Warriors possess. Per usual, James is the end-all, be-all to Cleveland’s ability to survive starting Thursday.

If he manages to somehow elevate and surpass the level of impossible he already did in last season, then James rightly could be considered the better of the 23s or anyone else in NBA history.

Can Steph Curry Finally be the MVP When it Really Counts For the Warriors? – Jorge Mercado

All the talk I have heard over the last few days about the third consecutive meeting between the Cleveland Cavaliers and the Golden State Warriors in the NBA Finals has been dominated by one question: Will Kevin Durant’s decision to leave Oklahoma City be validated?

For those unaware, Durant left OKC during free agency in 2016 after he and his team blew a 3-1 lead to the Warriors in the 2016 Western Conference Finals. Despite only being one win away from returning to his second ever NBA Finals, Durant decided to leave a pretty great Thunder team and join the already loaded Warriors in search of one thing: his first championship ring.

While his narrative has dominated the headline over the past month en route to the Warriors being the first team to begin a playoff run unbeaten at 12-0 through the first three rounds, there is only one question on my mind: Will Steph Curry finally show up and be the MVP for the Warriors when it really counts — in the NBA Finals?

It’s no secret that Steph Curry has taken the NBA by storm over the last two years, as shown by his two MVP trophies, including becoming the NBA’s first unanimous MVP last year. But No. 30 has not shown that MVP range comes NBA Finals time in his last two appearances.

In the 2015 NBA Finals, Curry played admirably, averaging 26 points per contest, but he shot just 38 percent from three. While he was decent, his stat line was nothing compared to the flashes of greatness he showed in the regular season and in the first three rounds of the playoffs where he averaged 30 points per game on 44 percent shooting from long range.

Last year, however, was when Curry completely came undone. After averaging 30.1 points per game in the regular season on a very efficient 58.8 percent shooting from the floor and 48.6 percent from deep, No. 30 averaged just 22.1 points per contest in the NBA Finals, including four games where he failed to even crack 20-plus points, on just 40 percent shooting from both the field and three-point range.

To say Curry came up short would be putting it very lightly. While many argue that Curry was still battling an injury sustained in the first round against the Rockets, the fact remains that he came up short. The two-time MVP was completely M.I.A. during the Cavs championship run last year, including an abysmal 17-point performance on 6-19 shooting from the field in Game 7 at home in a win-or-die situation. Not to mention, Curry also played a factor in two of the biggest plays in Game 7 that really hurt the Warriors in the end.

Up by one with just under five minutes left, Curry attempted a very forced behind the back pass with his left hand, a pass that ended up in the stands and went down as a turnover. That turnover marked the beginning of the end for the Warriors as they went on to score zero points in the final four minutes and 39 seconds, including a last-second miss by Curry that sealed their fate as the runner-ups of the 2016 NBA campaign.

In an interview with ESPN’s Chris Haynes, Curry admitted that he still thinks about that turnover but still has the confidence in his ability that he could make that play this year.

The second play was, of course, Kyrie Irving’s last second three-point shot that found the bottom of the net and brought a championship to Cleveland. Switched on to Irving, Curry tried his best to contest his shot, however, Kyrie got enough separation to knock down the bucket right over Curry’s right hand.

Despite playing decent defense, the only thing that mattered was that Kyrie outdid Curry in more ways than one, not just throughout the series but in a Game 7 on the road against a hostile crowd.

With all this being said, it’s apparent that the pressure is definitely on Curry to perform in the third act of these two teams. And it seems that he is in a perfect position to do so as he is averaging 28.6 points, 43 percent from long distance and 50 percent overall from the field.

Bottom line, Durant winning a championship and being validated is a very important story line, but nothing compares to how the two-time MVP will respond to all the criticism he has faced for his average play in the game’s biggest stage. No more injuries, no more distractions, no more excuses, it’s time for Curry to show his true MVP ability in this year’s NBA Finals and be the reason the Warriors win this series, not rely on Durant and company.