The Daily Nexus
Sports
UCSB Looks to Play Spoiler Against Blue-Green Rival Cal Poly
May 18, 2017 at 5:05 am by Sean White

Following its weekday victory on the road at USC, the UCSB baseball team will enter its next series versus Cal Poly in hopes of recapturing bragging rights in the Blue-Green rivalry.

Last season, the Gauchos were swept in their series against the Mustangs. They are currently hoping to overcome their drought of four-straight conference series losses and sit at 22-27 and 7-12 in Big West play. 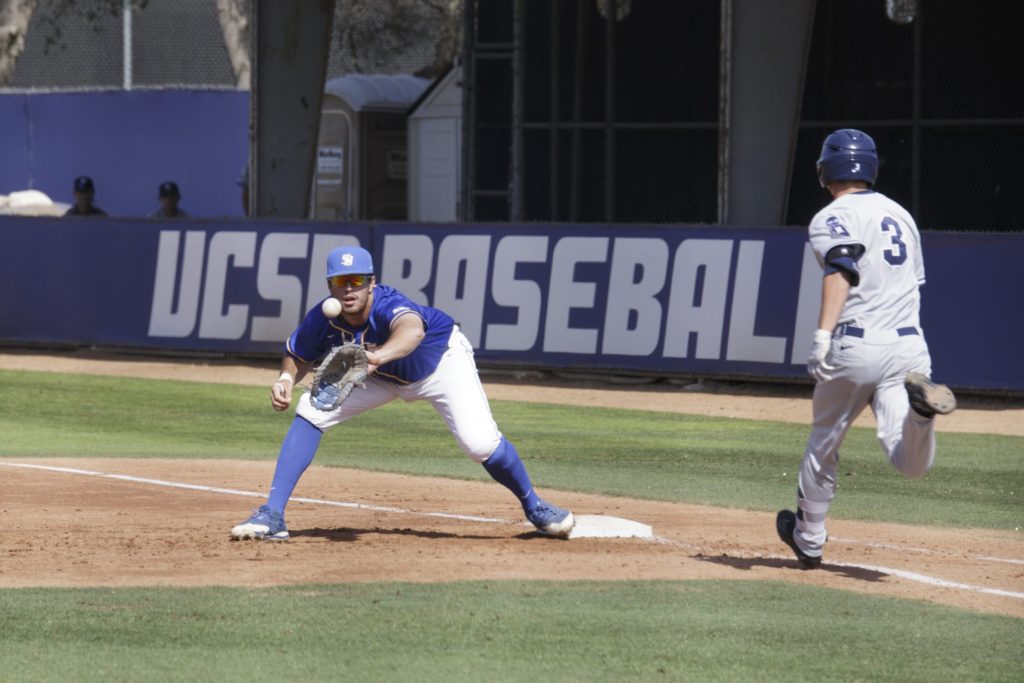 As the runner nears the base, Austin Bush reaches for the ball. Dustin Harris/Daily Nexus

Meanwhile, Cal Poly managed to bounce back after losing its first conference series against Long Beach State last week. Despite an 8-16 start in their first 24 games of the season, the Mustangs are 23-27, 11-7 after having won 15 of their last 26 games.

UCSB is in a position to shake up the Big West standings, as the Mustangs are currently in third place and are one game behind Cal State Fullerton for second.

While the Gauchos recent slate of opponents have been tough, playing against the likes of Cal State Fullerton and St. Mary’s (California) to go 2-5 in their last seven games, emerging for UCSB in the batting department has been junior first baseman Austin Bush.

Bush earned his second career Big West Baseball Player of the Week award after going yard a total of four times in UCSB’s week of games. His power hitting was responsible for seven of the Gauchos’ 18 runs over the span of the four contests. His current mark of 14 homeruns leads the Big West and surpassed his former career-high of 11 last season. Collectively, the Gauchos rank second in the conference with 41 homers.

Although Bush has managed to carry the offensive load for UCSB as of late, the Gauchos’ pitching core has been the victim of allowing a slew of runs during games in which they started off well but could not sustain their play.

Santa Barbara’s last three losses have included at least three allowed runs in a single inning. In the final game of its series against the Titans, UCSB allowed eight runs in the third, and in its weekday matchup against St. Mary’s it conceded nine runs in the eighth inning.

The inconsistencies on the mound should be a cause of concern for the Gauchos as they prepare to face a Cal Poly team that thrives at the plate as it leads the conference in hits at 469 and is second in batting average with a .274 clip, on par with UCSB’s average.

Named to the Louisville Slugger Freshman All-American Team by Collegiate Baseball Newspaper in his freshman season, McKenna’s .357 hitting average ranks second-best in the Big West. Able to apply pressure when batting, he also is a threat when on-base as he is fifth in the conference with 12 stolen bases.

What could be the most significant aspect of how the rivaled series will play out this weekend is the performance of the Mustangs’ pitching staff. More specifically, Cal Poly’s ability to not give up homeruns will be pivotal.

Overall, the Mustangs have allowed a league-low 17 dingers and have been even more efficient during conference play with just four homeruns allowed.

Setting the foundation to such a small allowance is Cal Poly’s heat on the mound as it sits atop the Big West with 410 strikeouts. Leading the Mustangs is the pitching duo of sophomore Spencer Howard and junior Erich Uelmen. Both rank second and third in the conference in strikeouts per nine innings as Howard averages 9.71 and Uelmen at 8.85, respectively.

This past Saturday, Howard tallied Cal Poly’s first complete game of the season in a 5-2 win over CSUN. He threw 118 pitches, allowed seven hits, two earned runs and finished with 10 strikeouts. Uelmen has consistently held up his end as he has struck out 80 batters thus far, ranking third in the conference.

Although the Gauchos possess the firepower to go hit-for-hit against Cal Poly, their fate ultimately comes down to how well they can challenge the Mustangs’ pitching.

The Blue-Green rivalry series will begin this Friday, May 19, at 3 p.m. The start time for Saturday’s game is 2 p.m., while Sunday’s closing game will begin at noon. All games will be played at Caesar Uyesaka Stadium.