The Daily Nexus
On the Menu
Celebration or Appropriation? The popularization of Elote
May 10, 2017 at 12:42 am by Collin McLeod

If you’ve been anywhere near the internet over the last few months, then you’ve probably noticed that almost everyone everywhere is losing their minds over elote. For those unfamiliar with the popular Mexican dish, elote is corn on the cob smothered in mayo, garlic, cilantro and chili powder and is commonly sold by street vendors. BuzzFeed, Tastemade and really every other food porn outlet has been covering what they deem “Mexican Grilled Corn” and how it is the best way to eat corn. The elote craze has even made it here to UCSB with the popularization of the “Elote Guy.” There are even sweet versions of the dish being pumped out by bakeries! While it’s great that Mexican culture is gaining recognition in a time when it is being demonized by our government, could this celebration of Mexican food culture be flirting with appropriation? 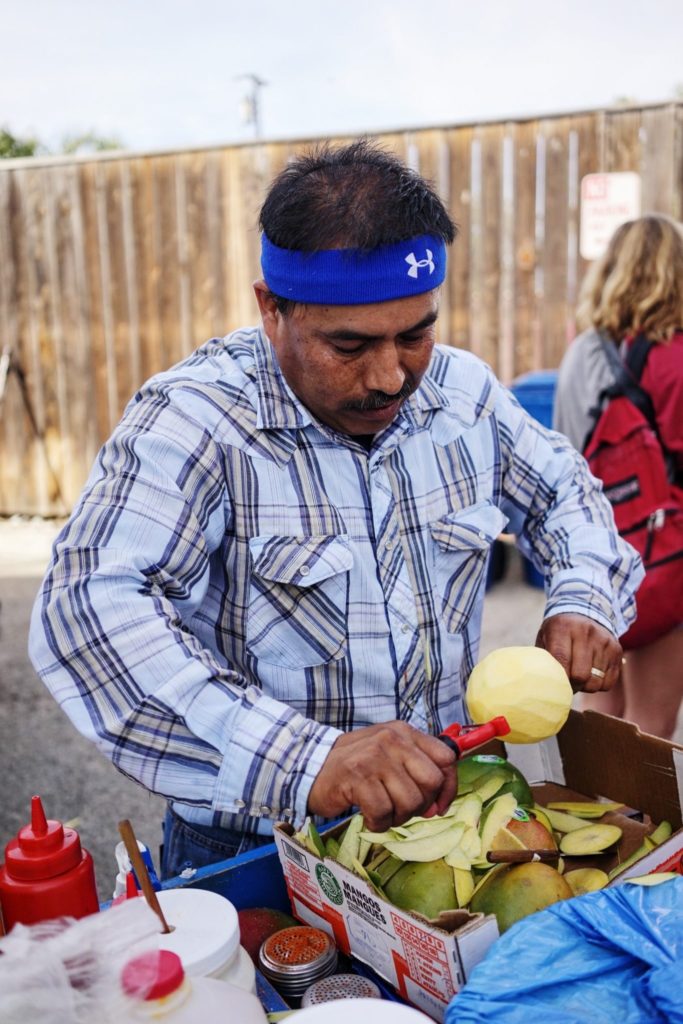 I think back to my childhood when my mom would pack leftover albondigas or empanadas in my lunch and my friends would stare at me in disgust. Their nostrils would flare as they picked apart my meals with their eyes asking, “Is that even good?” I would come home begging my mom not to pack leftovers in my lunch because it wasn’t cool to not have a sandwich and chips. Flash forward less than 10 years and suddenly it’s cool to eat “exotic” foods and interesting to show off how “adventurous” you are in your eating habits. My former friends now have the same foods I was eating when we were kids plastered all over their Instagrams gaining hundreds of likes. The same thing is happening now with elote.

When I was in community college a few years ago, I frequently visited all parts of L.A. as an escape from reality. Part of that escape was through trying different foods that weren’t normally a part of my diet. After a while, I wanted to try something I was more familiar with, so I found a street vendor in Burbank who sold elote. I shared the dish with my then-boyfriend and took in all of the delicious flavors. As we sat, people walked by with grimaces on their faces. Their reactions could have been due to two guys sharing a phallus-shaped meal, but when I started to hear complaints of the “smell,” I knew that wasn’t the case. Three years later, that same Burbank vendor has a line that goes down the sidewalk to the next block. Don’t get me wrong, I’m happy that street vendors are getting good business, but it definitely comes at a price. Elote goes from being a cultural artifact to a trendy and easily disposable food fad — cultural appropriation at its finest.

To put this in perspective, it’s like the Cinco de Mayo of the food world; people are down to take bits and pieces of a culture, but they will not actually take the time to celebrate it as a whole. It’s okay to enjoy elote and it’s okay to try new things, but before you pick up that piece of “Grilled Mexican Corn,” be sure you’re aware that you’re ingesting another part of another person’s culture. It isn’t a trendy food fad, it isn’t “exotic” and it certainly doesn’t make your Instagram look urbane; it is much bigger than that. Just like all “ethnic” dishes, people have been eating elote for a long time and they will continue to after the fad is over. So next time you post about how #goals your elote is, #reconsider the cultural implications; it’s not a hard task!

Surely, this article is a parody.

You forgot to label this as nexusstentialism

Lmao as a Mexican, this article is BS. Buying elotes from street vendors supports local businesses. Isn’t this something sjw’s want? Y’all complain about everything.

I’m sure Hijinio Camacho, the elotero man who gained national infamy off selling his food to UCSB and IV doesn’t give a fuck about appropriation. The man’a business is booming. American ociety will always have food fads, it’s happened to pho, acai, poke, etc. As unsettling it is, it’s gonna happen. What do honestly expect from Americans lol. As the other comment said, as long as local businesses are supported then idc

dude. your name is collin mcleod

So are u blatantly trying to prevent this man from having a successful business or are you actually offended by people eating elote? This time last year he just had a tiny cart, now my guy has a big ass tent… and you are saying this is problematic? Also, idk what kind of kids you grew up around, but when my mom made me chilaquiles or other bomb ass food, my little brown mexican ass was stoked bc its way better than their white bread sandwiches. also, didnt you just write an article about a bunch of “ethnic” food in… Read more »

Hey man, here’s the thing. I understand you believe that cultural appropriation is an issue, but implying that “there are consequences” to the Elotero man getting more business is ludicrous, and its particularly insensitive to the much more important factor, which is that the man, among many other vendors, does this FOR A LIVING. The fact that the community is supporting the man’s livelihood is good, regardless of whether you feel that people are eating elotes for the right reason or not.

Is this article a joke lol

how the fuck is elote a cultural artifact?
to me it’s just a cheap tasty snack i would get when i lived in south central LA
people shouldn’t have to “reconsider” anything when they’re hungry, hear the elote man ringing down the street, and share their food over social media.
just because people don’t experience a meal or a certain type of food the way you do, doesn’t mean they’re doing it wrong.

So does that mean, because I’m Asian, whenever I get Starbucks limited edition drinks, I’m appropriating white culture? (oh but I’m sure it must be fine because it’s just white culture) You realize that by blatantly labeling elotes as part of someone else’s culture, you’re already labeling them as the other? You people cry that America is exclusive and tries to erase the cultural identities of immigrants, but when you specifically point something as so integral to the So Cal street food scene like elote as “someone else’s culture”, you are literally excluding it from American culture. You’re part of… Read more »