The Daily Nexus
Science & Tech
Parrotfish More Concerned With Food Than Predators
May 4, 2017 at 6:30 am by Natalie Overton

At 11 a.m. when I walked into the lab in the Marine Science Building, I was confused for a potential intern. After joking that I could really only make coffee and enter data (which both scientists recognized as the truly important roles they are), I started asking Katie Davis and Peter Carlson about parrotfish behavior. The two of them were part of a team that studied predator-prey relations off of Moorea and Palmyra and whose research results were recently published in Acta Oecologica.

Parrotfish seem more interested in their food than in the possibility that they might also be food. This makes sense in terms of conserving energy, as Davis explains.

“These grazers pretty much have to constantly eat to get energy. They grow rapidly and they reproduce a lot, so they’re eating all day,” Davis said. “So, in a place like Palmyra where there’s tons of predators, if they were to stop eating and flee every time a predator was just swimming by, they wouldn’t be able to make a good living, you know?”

It works the same way with the predators, too, who also exhibit less aggressive behavior and wait for certain times of day when they had an inherent advantage before going in for the kill.

“It would be really energetically costly for the predator to just be chasing these fish around all day long,” Carlson said “So these predators are just going to chill and wait for those predatory hours when they have the least energy expenditure with the biggest reward.”

Davis’s team observed two islands, both tropical reef habitats. Palmyra has been managed as a national wildlife refuge since 2001, so the researchers figured it would be a good example of how parrotfish react with no human predators.

On the other hand, in Moorea, fishing is a cultural staple, so the area is heavily fished, especially near easy-to-access areas on the back reef such as the side of the reef facing the shore. The fish back here were shy, while the fish living in the fore reef habitat were far calmer. Davis says that the human predator factor made it impossible for them to observe the fish on the back reef.

“We tried to do some observations in that habitat, and the fish were really skittish and they would just bolt away from us, which we didn’t see in Palmyra,” Davis said.

To gage fish behavior, a snorkeler or a scuba diver swam out, trailing behind them a floating GPS unit that recorded its location every 15 seconds. Once they had decided on a fish to watch, they floated the unit out over the fish, moving it every time the fish moved. Divers also recorded bite rate and other fish-on-fish interactions. 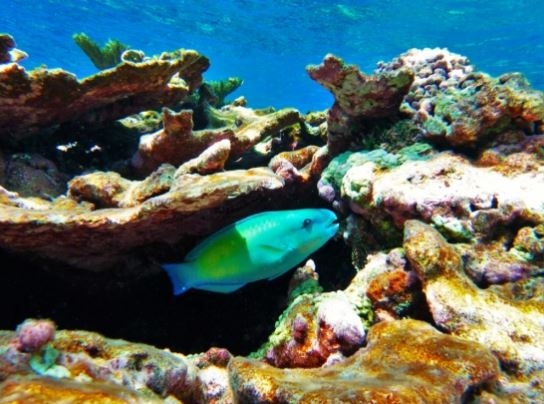 Parrotfish are thought to be important to coral reef health because they eat algae that compete with coral for space on the reef. However, exactly what these fish eat has yet to be determined. It is speculated they primarily bite low-lying red-turfing algae as well as other species of macroalgae. / Courtesy of Katie Davis

“Basically, they’re always eating. So if their feeding stops because they’re chasing or being chased by another fish, then it’s fairly obvious that it has a directed reaction toward another fish,” Davis said.

The notable aspects of this research are two-fold. First, the fact that these parrotfish barely react to predators overturns the previously held assumption that introducing predators always triggers a shift in the habitat’s plant life. This idea of a “landscape of fear” is mostly understood in terms of terrestrial systems, like in Yellowstone Park, where elk behavior shifted when wolves were reintroduced, resulting in changes in forest dynamics.

“This kind of concept has now been applied to marine systems,” Davis said, “It’s been shown in some larger marine animals, and people have started to theorize that predators might have strong behavioral effects on prey species on the reefs as well.”

Through their observations in places like Palmyra, though, this theory has been shown to not play out very well.

The second major conclusion Davis and Carlson gathered from this research is that if these algae-eating parrotfish are this resilient, they can play a huge part in supporting reef habitats as environmental conditions change.

“The bigger climate change issue is probably the frequency of bleaching events that are occurring with coral,” Carlson said.

Once these events kill the corals, algae tend to take over, growing on the dead corals.

“The experiment that’s playing out right now in Palmyra, on the great barrier reef and throughout the world is if we have an intact herbivore population such as Palmyra, when these bleaching events do occur, is the herbivore population robust enough to eat the algae and keep it at very low levels over the course of a decade while coral recovers?” Carlson said.

The smaller the algae, the easier it is for the fish to eat, and when the algae grows bigger it becomes spiny and tough. Eventually, if there are no herbivore populations to keep it in check, algal growth can reach a forest-like stage, filling the water with chemicals that make it impossible for the corals to regrow.

“A lot of reefs like Moorea that have fishing on that back reef habitat where we weren’t able to work. What was once coral is a lot of balmies covered in algae now,” Davis said.

Having a lot of herbivores helps to prevent this, and it is not all about parrotfish, either. Other species like unicorn fish and chubs will eat larger algae, the kind of late-stage stuff parrotfish will not touch. The good news is that fish respond to resources, so if algae grows somewhere and fish exist in the vicinity, they will come around.

Davis cites an example of an event in Moorea, during which the combination of a cyclone and a crown of thorns starfish outbreak led to a major reef disturbance.

“These two disturbances killed all the coral on the whole north side of the island, and after that, coral declined and turf algae increased.” Davis said. “Parrotfish came in like gangbusters, and they were able to keep those algae levels low enough that when there was a recruitment of corals, the algae hadn’t taken over the reef corals and corals started to come back.”

Parrotfish’s beaks make them great for coral settlement because they scrape the algae clean off the reef instead of just plucking at it, clearing the playing field for coral polyps.

As the conversation came to a close, I had one more burning yet embarrassing question: Are beaches actually made of parrotfish poop? YES. Yes, they are. According to Carlson, when the fish are trying to get at the protein and lipid-rich organisms within the coral skeleton, they eat the skeleton, too, and out comes sand. That’s why places like Palmyra are built on a foundation of dead coral with sand on top.

Davis and Carlson then brought the conversation back to a serious concern: If algal growth replaces coral growth, reefs and islands will build up from layers of algae, and eventually they will begin to melt, along with the habitat for thousands of fish. After this study, especially, parrotfish have proven themselves to be stabilizers of the underwater world.

“It’s the long-term stuff that we see here, you know,” Carlson said. “If we remove one aspect of the ecosystem, whether it’s herbivores or other things, that it can have detrimental effects in the long term.”

Parrotfish are so important. But now what? What can we do?

“It’s hard; people in Moorea live off that protein, you know,” Carlson said. “So you want to figure out a way to be sustainable and let people still live off the land but do it in a conscious way, whether that’s through protected areas … or closures at certain times of year. It’s what we do.”