With spring here, it’s easy to get swept up into thoughts of all things new. For me, however, the season brings simple pleasures and time with family. In my opinion, nothing encompasses these ideals better than carrot cake. It’s important to note that, most of the time, my family consists of my parents, my siblings and my godmother. There has never been a single important moment during which I have not had them there with me. There have been birthdays that have consisted of nothing more than my family and some cake, that being more than enough. Carrot cake, for me, represents all these special little moments, the smell of cinnamon instantly bringing me back to time spent with family. Here’s hoping that in making this springtime dessert, you, too, are reminded of good times and feel just a bit less homesick after a slice or two. 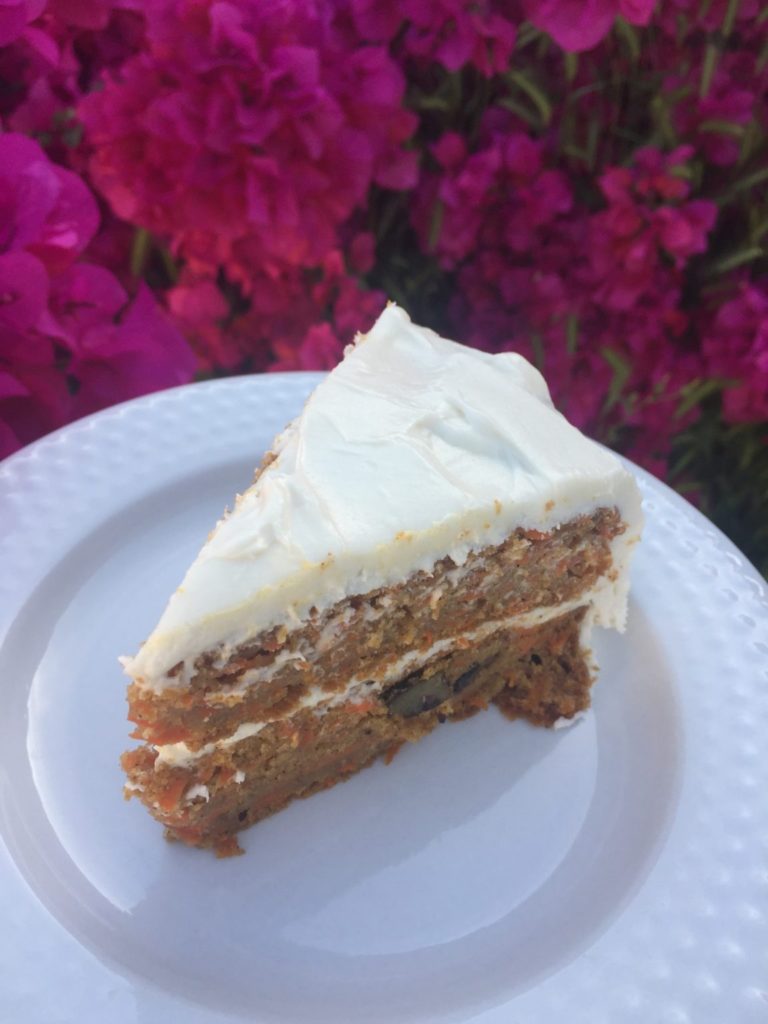 Directions
1. Preheat the oven to 325 degrees. Butter two 9-inch cake pans; line the bottoms with parchment paper. Butter the paper and flour the pans.
2. Spread the pecans on a baking sheet and toast for 8 minutes, until fragrant. Cool and finely chop the pecans.
3. In a bowl, whisk the flour, baking powder, baking soda, cinnamon and salt. In a small bowl, whisk the oil, buttermilk and vanilla. In a large bowl, using an electric mixer, beat the eggs and sugar at high speed until pale, 5 minutes. Beat in the liquid ingredients. Beat in the dry ingredients just until moistened. Stir in the carrots and pecans. Divide the batter between the pans and bake the cakes for 55 minutes to 1 hour, until springy and golden. Let the cakes cool on a rack for 30 minutes, then unmold the cakes and let cool completely.
4. In a large bowl, using an electric mixer, beat the butter and cream cheese at high speed until light, about 5 minutes. Beat in the vanilla, then the confectioners’ sugar; beat at low speed until incorporated. Increase the speed to high and beat until light and fluffy, about 3 minutes.
5. Peel off the parchment paper and invert one cake layer onto a plate. Spread with a slightly rounded cup of the frosting. Top with the second cake layer, right side up. Spread the top and sides with the remaining frosting and refrigerate the cake until chilled, about 1 hour. Slice and serve.

Be warned that if you are anything like me, one slice will not be enough to satisfy both your stomach and sweet tooth. You may find that you have consumed half the cake in no time. Eat at your own risk.