The Daily Nexus
On the Menu
Starbucks Gets Mythical with the Unicorn Frapp
April 20, 2017 at 7:49 pm by Kelsey Ferrara

Starbucks jumped on the unicorn bandwagon this week with the announcement of its new Unicorn Frappuccino. This drink plays on the new social media food trend that idolizes the mythological creature in the form of sparkly rainbow sweets. But this strange new addition to the frappuccino family isn’t here to stay, as it is only going to be available between April 19 and April 23. This announcement came as a shock to many customers since there was so little advertising done to publicize the new drink. Nevertheless, caffeine addicts and mythology lovers are already mesmerized by its vibrant colors and mystical flavors. 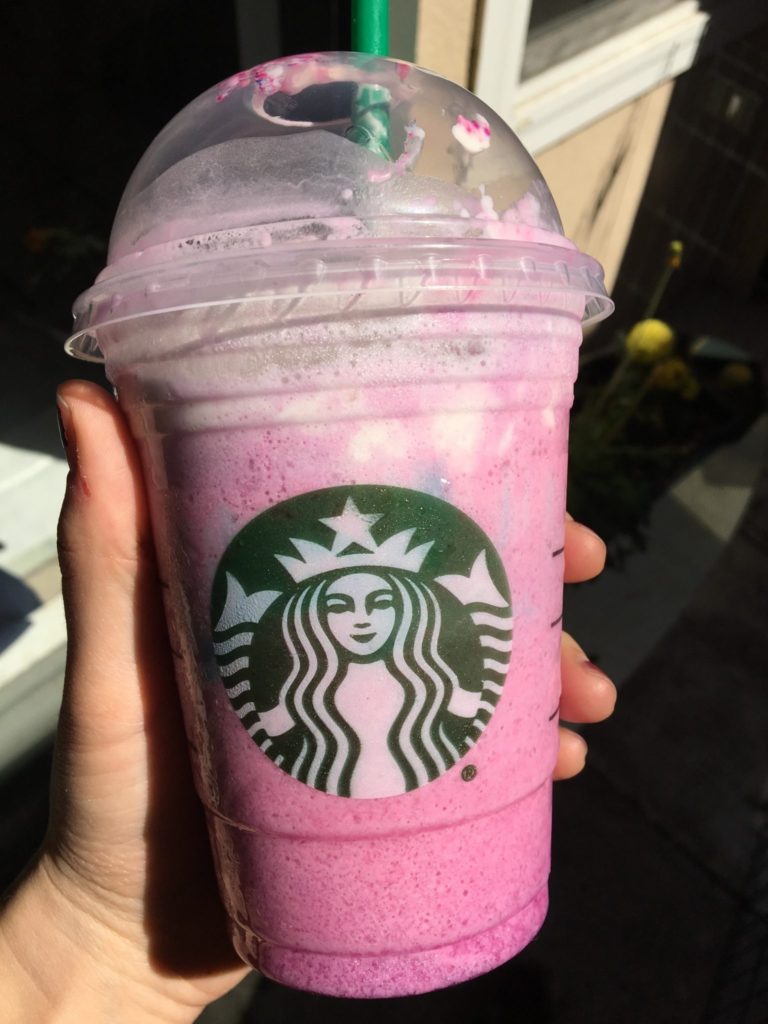 The Unicorn Frappuccino is made by blending pink powder into a mango-flavored Frappuccino, which is then layered with whipped cream and pink powder on top. A swirl of blue syrup circles the sides of the cup and adds an extra hint of tanginess. There are a few magical elements that set this drink apart from the other overpriced, caffeine-laced drinks that Starbucks has to offer. Upon stirring, this drink will begin to change color from purple to a vibrant pink. It will also change flavor while you’re drinking it, going from fruity to tarty to sour in a matter of seconds.

It’s no secret that I’m an avid Starbucks drinker, and I jumped at the opportunity to try this unique concoction. However, I was worried that someone I know would see me sipping this as I strolled down Pardall. This anxiety stemmed from the Unicorn Frappuccino looking like something that is exclusively made for 13-year-olds. Its bright colors reminded me of every notebook I used in middle school, of every embarrassing moment I had as a preteen and every half-used lip gloss that I owned before the age of 16. The aesthetic of this drink, while pretty, is not one of unicorns but rather that of Instagram accounts and beauty gurus. Upon drinking it, I felt like I had suddenly turned into that obnoxious person who cannot go an entire meal without snapping a picture of their food.

How the drink actually tastes is a completely different matter. The first sips were sweet and airy, like a combination of cotton candy and watered-down fruit. It barely tasted like anything more than flavored water, and I was struck by a thought: If you’re going to sell something that looks like a rainbow, shouldn’t it at least taste unique? I was eating my words a few minutes later. After stirring, the drink changed into a pink color and became much tangier tasting, reminiscent of sour Jolly Ranchers. It was an interesting experience, to say the least, but hard to accurately describe since the flavor changed constantly and often in mid-sip. One gulp may taste like cotton candy while the next is sour and cringe-inducing. I made the mistake of having some whipped cream off the top and it tasted like the barista dumped an entire bag of sour skittles into my frappuccino. Even with these criticisms it was still an interesting experience to drink something so innovative that it actually transforms while you’re enjoying it. The drink is disappearing into legend on April 23, so you have a limited time to enjoy this mystical wonder.