The Daily Nexus
Sign of the Times
The Trump Administration Finally Got Something Right
April 13, 2017 at 5:00 am by Dylan Parisi 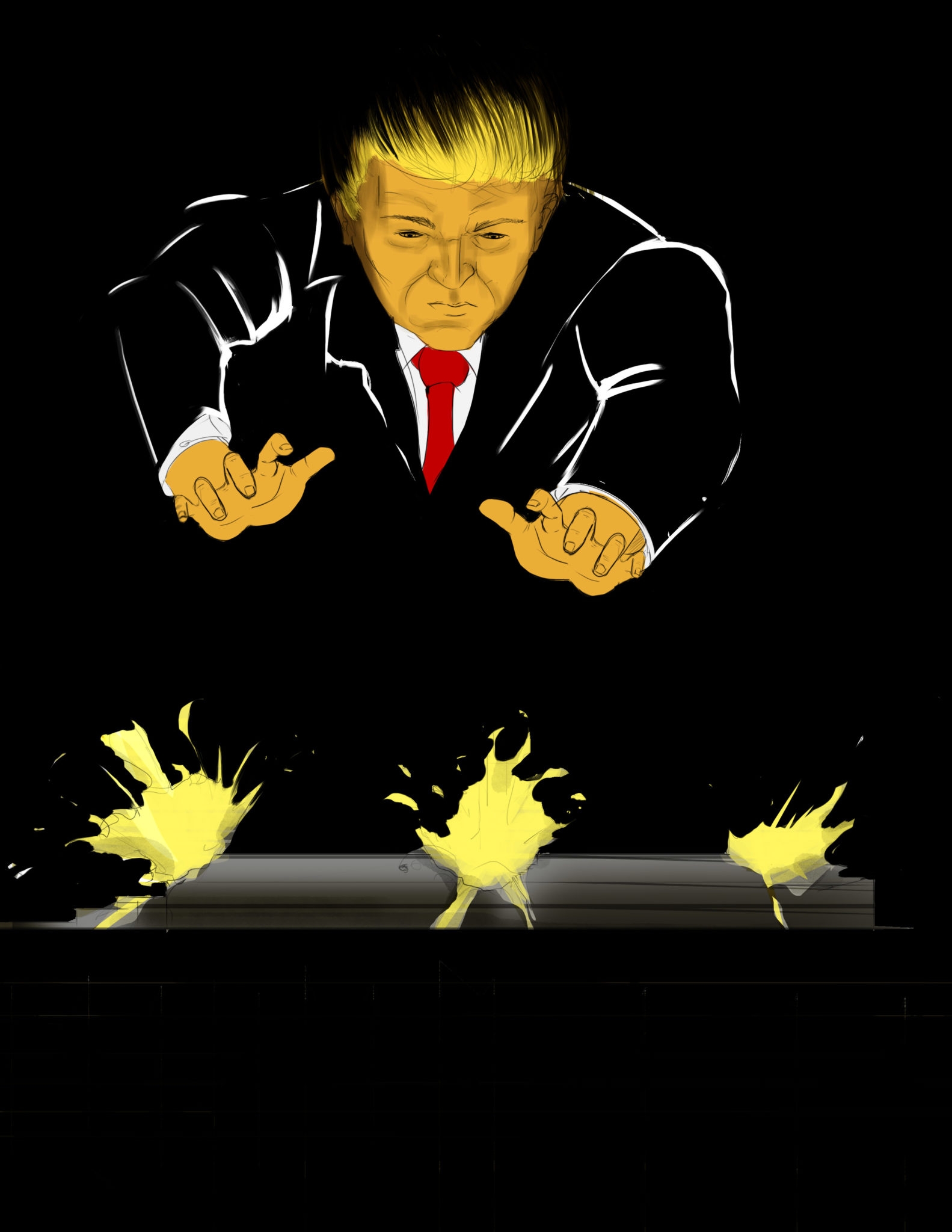 For the first time since Trump’s inauguration, Americans — including liberals —  have reason to be proud of the White House’s actions. Late Thursday night, the United States carried out an attack on a Syrian airbase that recently used chemical weapons on members of its own population.

The U.S. Navy fired 59 missiles at the airbase, killing around 10 (though reports vary) and destroying aircraft and equipment. The attack was carried out at a time during which it was believed that casualties would be minimized and Russian troops (allied with Syria) stationed at the base were warned roughly an hour before the missiles hit, giving them time to evacuate. For many reasons, this is an encouraging sign (at least comparatively) for the possible direction of the Trump administration.

I want to start with the attack itself. For six years, the Syrian civil war has been the catalyst for ongoing atrocities committed by the Assad regime, but none so blatantly immoral — and illegal, according to international law — as its use of chemical weapons on its own civilians. Though President Obama was not in favor of military intervention in Syria during his second term (likely because he believed the Syrian government would be toppled regardless of U.S. participation), Russian intervention in favor of the Assad regime has prolonged the war and further complicated the situation.

As a result, the Trump administration had no choice but to take action after the most recent chemical attack. The missile strike was a clear and direct message that no matter how much longer the conflict continues, international war crimes will not be tolerated by the United States or its allies. Additionally, the attack serves as a warning to any other nations that the United States is not afraid to respond swiftly to issues of international law.

For those readers who tend to stand against foreign intervention or believe it is unproductive or counterproductive, let me make one thing perfectly clear: The reality of civil and religious warfare in the Middle East and the resulting breaches of the basic civil liberties of women, homosexuals and children (just to name the most regularly oppressed and helpless groups) will not be made to go away by simply pretending that they do not exist.

Any person who believes in the civil rights of all people (which quite obviously include the right not to be killed with poison gas) should do well to understand the difference between a measured and entirely appropriate military strike like this one and the disastrously naïve and poorly thought-out strategy of the Bush administration during the second Iraq war. These are two entirely different cases of foreign intervention.

Though I don’t for a second believe the actions of the Trump administration were anything more than an attempt to gain diminishing public support (because let’s face it, pissing off Putin was the last thing Trump wanted to do), they are still actions to be proud of and actions the U.S. should take again if confronted with similar situations.

As hypocritical as it may seem for Trump to suddenly decide he is willing to protect Middle Eastern babies from attacks…we can only hope this is a turning point in Trump’s policies.

This leads to my second point: The shift within Trump’s own circle of advisors. Since Trump’s inauguration, members of his cabinet have been competing for influence.

Though his inner circle is comprised of individuals who generally support the right, there is noticeable ideological variation, from Tea Party and alt-right to conservative and even moderate. This has created noticeable tension in the White House, tension showcased most recently when Jared Kushner, Trump’s son-in-law, senior advisor and former Democratic donor, clashed with Steve Bannon, Trump’s chief strategist, a former Breitbart executive and an alt-right conspiracy theorist.

The missile strike may represent a shift from Bannon’s agenda of isolationism, ultra-capitalism and white supremacy — an agenda generally in line with Trump’s campaign promises but which has given him extremely low percentages of public approval — to a more liberal agenda more in line with Kushner’s. Though only time will tell if this is in fact true, my use of the word “liberal” in this case is not an exaggeration for one simple reason: The missile strike was in line with true liberal values including the protection of civil liberties and the push for progressive policy even if foreign intervention is necessary.

As hypocritical as it may seem for Trump to suddenly decide he is willing to protect Middle Eastern babies from attacks (which was his publicly stated reason for shifting viewpoints on Syria), we can only hope this is a turning point in Trump’s policies. Though alt-right, pseudo-journalists like Alex Jones have condemned the attack as anti-conservative and internationalist, such decisions are likely to improve Trump’s approval rating among moderate crowds.

Lastly, though much damage has already been done to liberal values like equality and democracy with the appointment of cabinet members like education secretary Betsy DeVos (who in her Senate hearings displayed an almost unbelievable lack of knowledge about most things related to education) and Attorney General Jeff Sessions, we are stuck with Trump for three years and nine months, and we must push for progressivism.

It is extremely likely that Trump’s shift toward moderation on the Syrian issue — which has garnered bipartisan support as well as support from international allies France, Spain, the U.K., Australia, Japan and Germany — was a direct result of the public’s disapproval of previous Bannon-esque policies, like the travel ban. The missile strike on Syria is an excellent reminder that activism and opposition to unjust policies can have a progressive effect on even the most extreme nationalist political agendas.

I don’t think the same comments can be said of Trump’s current brinkmanship with North Korea, Dylan. By the time he is finally done in with, Kim will have eviscerated a large portion of the South Korean population. The economy of South Korea will be in shambles. It’s not too much longer before we all see what comes to pass. Kim will surely test one of his nuclear weapons or fire a missile within the next week. Both leaders are very unstable egotists; wouldn’t you all agree? This nightmare has just begun.

Michael, I see a major difference between the Assad Regime and North Korea – that is, Assad does not have the ability to deal a considerable blow to the U.S. (as the DPRK perhaps does). And though Russia could certainly act against the U.S. on Assad’s behalf, Putin understands that his interests in Syria are not worth risking war with America. I agree with you that the situation with North Korea is a dangerous one, and that Trump likely has no idea what he’s getting himself into/what a mess he could be starting. We certainly should not expect to predict… Read more »

“Trump has directed the National Security Council to collaborate with the Defense and State Departments and intelligence agencies to ‘provide options and have them ready for him if this pattern of destabilizing behavior continues.'” He insists that these documents be ready for Jared by the time he finishes his (18) holes on Easter Sunday.