The Daily Nexus
Sign of the Times
Hey Liberals, We Did This to Ourselves
March 9, 2017 at 5:00 am by Brian Wheat 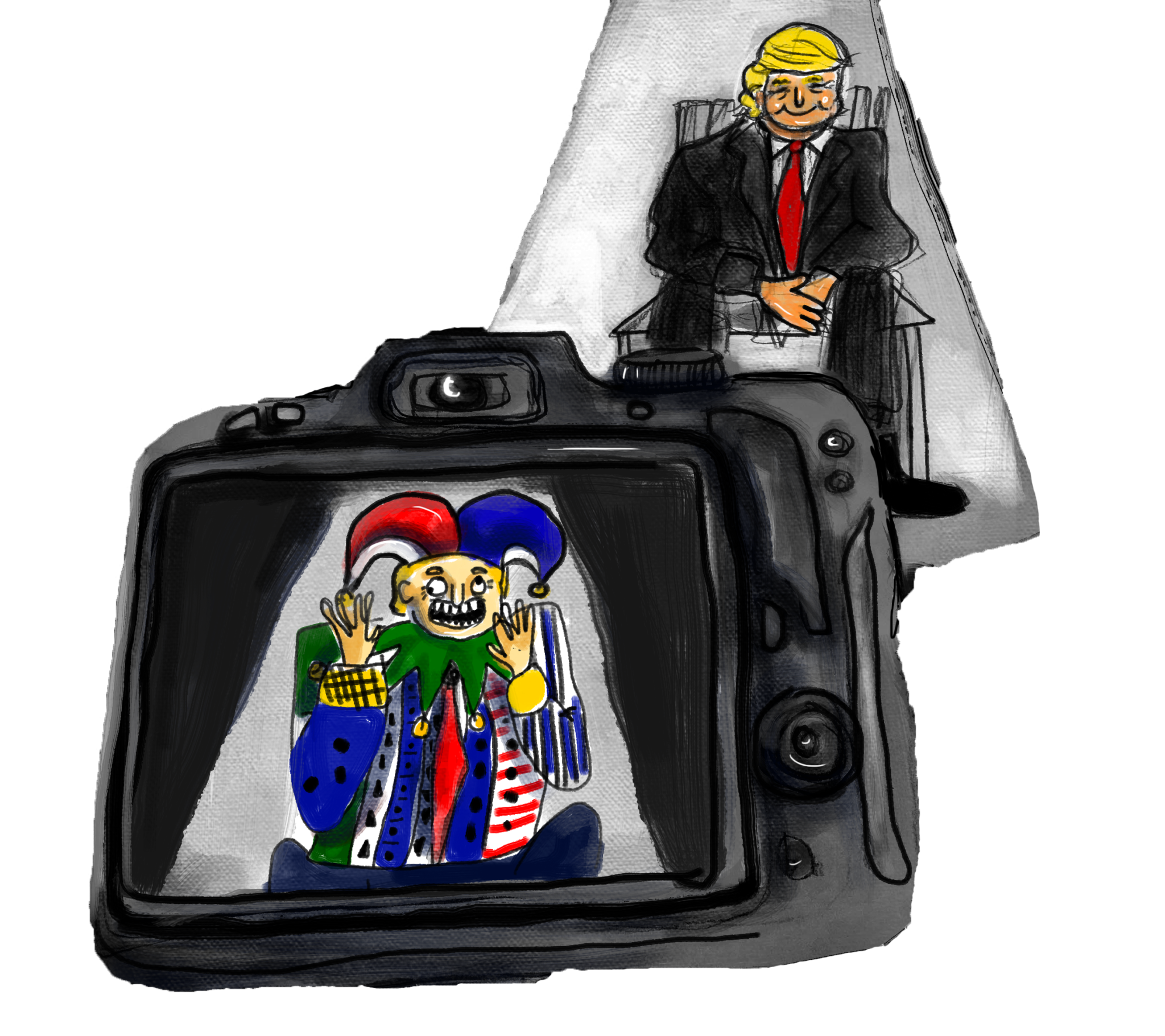 “What are you talking about, asshole? It was obviously the racist, misogynistic, scum of the earth, cancer of America: conservative republicans!!!” – See, that’s my point right there. That orangutan in the tacky suit and gaudy tie you literally sobbed about in November? Yeah, you did that. That’s on you to an extent you’d really prefer not to realize. You’re going to now, though because apparently after emerging from our safe spaces and nervous breakdowns (seriously guys?), we still haven’t gotten to the point of taking partial responsibility for this travesty of an election.

Think about it: What has the mainline cultural attitude been since the Bush era and all the way through Obama: more-or-less our entire lives? It has been nothing but bashing on conservatives and their values. Yeah, it effing has. And the polarizing effect we’ve just been noticing that social media and the internet has been having on us sure as hell hasn’t helped either.

Two out of three mainstream media outlets have a liberal slant, all of late night TV, most comedians, I assume most actors, there are a prominent few, but the rest keep their opinions to themselves for fear of being black-listed (case in point right there). And let’s see, there is the majority of the internet — oh no? You don’t think so? Pretty much everywhere you go has a liberal bias, just like you do, which is fine, but if you really want some sort of right-wing perspective on current events, you have only a handful of places to go, each of which are increasingly crazy: Fox News, Breitbart, Drudge Report, Infowars (run by Alex Jones), which is insane, and 4Chan, a website with considerably more than its fair share of neo-Nazis.

So for the un-insane, there are really only two or three major spots where a conservative can not feel like the only person who believes in laissez faire capitalism, small government and social/religious conservatism, which, strictly speaking, is what a conservative actually is. This as opposed to CNN, MSNBC, BBC, Politico, The Huffington Post, The Daily Beast, Slate, Salon, Vox and Think Progress *gasps for air* on the liberal side. So you see the media disconnect here, right?

Rather than spouting some platitude about two wrongs and a right or something, I’ll just ask, “Was it worth it?”

Progressive liberals basically own all major facets of our culture today, along with the current zeitgeist, and it has been this way since the early 2000s. Remember how much fun everybody had making fun of George W. Bush? It was so easy! We thought there would never be another president who would be so depressingly capable of producing comedy gold. But all of those jokes that were at the expense of Bush, like we thought (or maybe just didn’t care), weren’t just attacking him. We were attacking and mocking and ridiculing and shitting all over a very large group of people’s world view, and when Obama was elected, we cranked it up to 11 and broke the knob off.

Oh yes, it was our time! Time to finally hit back after all the perceived crap we took and the indignities our country and marginalized peoples suffered at the ham-fisted hands of a Bush presidency. We never let up. The media, strongly left-leaning like we’ve seen, was punching up before gleefully sticking it to the incompetent man. But the liberal media was also punching down. They were punching down at a people who more and more saw themselves as being marginalized by society.

They saw themselves as the ones who were unwanted, the ones who were being pushed out. And you know what? I think they’re right here. You can say it doesn’t matter, that treating conservatives and republicans like shit is justified because they’d do the same to people of color and the LGBTQ community and everyone else. It was time for change and they were going to feel it like you had for so long. Rather than spouting some platitude about two wrongs and a right or something, I’ll just ask, “Was it worth it?”

It’s because we hammered them. Day in and day out, everywhere except Fox News, it was “Republicans are evil this, Republicans are obstructionist that, they’re all racists, they’re all misogynists.” You know really, reeeeeally deep down it’s most likely the case that all republicans aren’t Nazis (at least I hope). Either way, we didn’t care.

It felt good after eight years of Bush to be in power, and we did the one thing you don’t do as the victors in any conflict; we did the same thing the Allies did to the Germans after World War I: we kicked them when they were down. We humiliated them day in and day out, and just like the Germans post war, it didn’t take long for the Republicans to take their revenge. In the words of Alfred in “The Dark Night,” “[We] squeezed them, [we] hammered them to the point of desperation, and in their desperation, they turned to a man they didn’t fully understand.”

Now we might say that even this is justified because they’ve done so many degrading things to us and all marginalized groups. We’re the ones who are really oppressed here, not them!! Screw them!! Well, sure, sure. That might be an attitude to take, but have you heard of the adage, “Never wound what you can’t kill”? Maybe here, it would be more appropriate, I hope, to say, “Never wound what you are unwilling to kill,” since I hope no one is willing to essentially conduct a political purge, which would mean, you know, killing off a large portion of the country. So since, I hope to Christ, nobody is even remotely willing to entertain that notion, we are going to have to try to heal here and find common ground with the conservatives. Otherwise, the future of our union looks bleak.

Brian Wheat believes it is time to stop the back and forth and move forward.

I love it, brain mother fucking wheat. You gonna piss off so many libtards brah.

Well Said and very true! Id like to add my 2 cents why I agree we liberals are to blame for Trump. Protest Votes! If you voted for anyone other than Clinton you helped Trump get elected! 4.4 million votes for Gary Johnson, seriously?!? 1.4 million for Jill Stein. 731,000 for McMullin and over a million Write-In votes. That’s over 8,000,000 votes of which Clinton needed just a couple thousand in a few states. Every Vote Matters and along with the Electoral College the system we have usually narrows the field down to ONLY 2 real candidates…pick ONE next time… Read more »

Consider yourself warned there are lots of folks on the other side who have guns who think you and your ilk might be better off dead. They’re not “liberal” though. They hate white fascists, Nazis and racists. They also believe the American economic and political systems are profoundly evil and need to be eradicated. It’s funny, crazy old Charlie Manson must be laughing. His dream of a race war is close to coming true. He preached something else besides helter skelter: that the young must kill their parents. Interesting….

This piece is: 1.) Unbelievably patronizing in that it speaks for conservative voters without any sort inquisition on how they feel. 2.) Incorrect in claiming that liberals “own the media”. Especially not the case in rural America, where conservative talk shows, funded by the Koch Brothers and friends, are pervasive. 3.) Condescending to people who are outraged to Trump’s presidency. Rather than looking at the multitudes of reasons this election’s fundamentals leaned far to the right (moderate economic growth, pervasive dark money, conservative talk radio’s propoganda machine), you decide to mock people for being upset about the election results. 4.)… Read more »

Thing is, there’s been a lot of pieces like this talking about how this election was all the liberal’s fault, as if they’re the only ones that matter and the only reason the Republicans won was because the enlightened Democrats screwed the pooch. Well you certainly didn’t do yourselves any favors with the moral posturing and blame gaming but in reality the GOP was taking this with or without you. Sure it might have been Cruz or Rubio instead of Trump if he didn’t have the endless supply of ammunition given to him by the holier-than-thou attitude of the left… Read more »

How about the fact that you had a crooked candidate who lied, cheated, stoled and murdered to get her chance to run for president?