Two weeks removed from the UCSB track and field’s dominant victory as hosts of its season-opening outdoor meet at Westmont College, the athletes will be well-prepared for the All-UC Meet this weekend at UC San Diego. 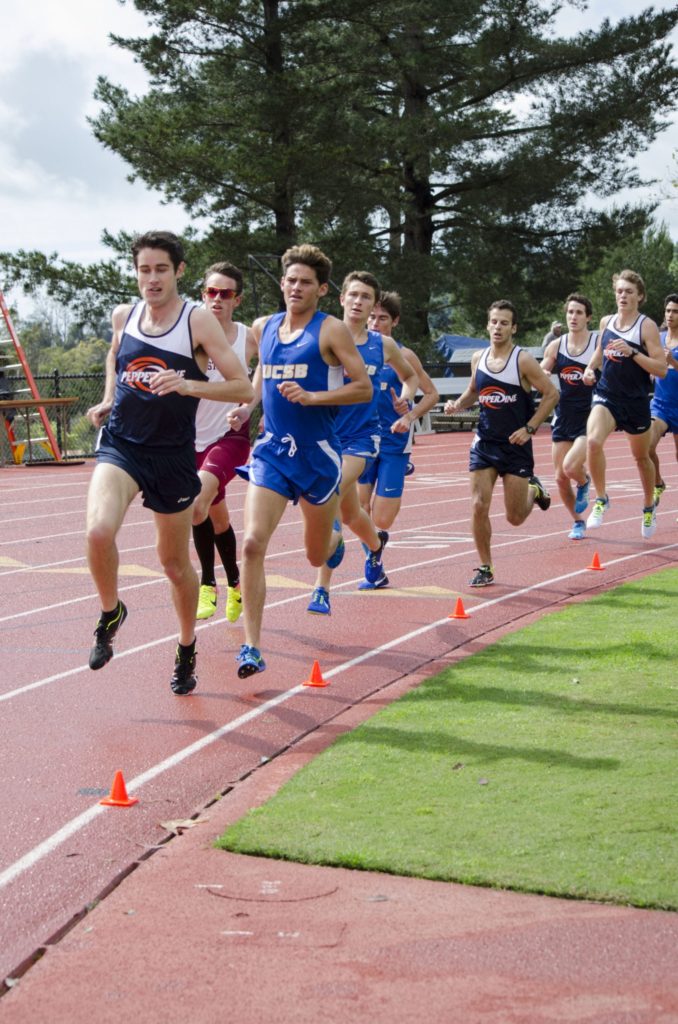 A group of runners, including Josh Paradise, make their way around the field in the one mile run. Christina DeMarzo / Daily Nexus

In the Gaucho Roundup on Feb. 18 — a meet consisting of Pepperdine, Westmont and Santa Barbara’s men’s and women’s teams — the Gauchos won 14 of the 18 events, giving them a taste of victory as the more important meets begin rolling around. The wins also came from a broad spectrum of disciplines, from shot put to triple jump to the 4×100.

“The best way to bring a team back together is to win,” said sprints/jumps coach Travis Anderson after his groups’ medal-claiming performances.

In the sprints, sophomore sprinter Alanna Epps continued to build off her impressive indoor season, finishing first in the women’s 200m with a time of 25.46, a personal best, adding on victories in the 4×100 and 4x400m relays.

Fellow sophomore sprinter Callan Cochran had a similarly successful meet at Westmont, winning the men’s 400m in 50.91 and earning another first place finish in the men’s 4×100.

Junior sprinter Sike Azu-Irondi also had a good day for himself, setting a new personal benchmark of 21.72 to place second in the men’s 200m, as well as anchoring the winning relay team Cochran opened for. Azu-Irondi also ran the first leg of the men’s 4x400m relay, with the Gaucho foursome finishing first in an impressive 3:26.47.

Senior Tori Usgaard and sophomore Jazmin Moss — who were perhaps the most successful UCSB athletes for the brief indoor season — continued their great run of jumps. Usgaard reached 18’10.75″ in the women’s long jump to claim first place, a new PR, and Moss, in addition to her leg on the victorious 4x100m relay, won the women’s triple with a 38’3.25″ mark.

In the throws, senior Matthew Kuskey threw 225’8.5” in the javelin to win the event and climb to second on UCSB’s all-time list in the new-style javelin. The senior also threw the fifth-longest in school history with a throw of 222’0″ last year, and he will be hoping to make enough improvement over the course of the year to threaten Thomas Gore-Schreck’s program record of 234’3”.

Apart from the women’s javelin, the Gauchos won every throwing event. Junior Kayla Thayer succeeded in the women’s discus with a throw of 139’5.0″ and junior Kordell Hampton won on the men’s side at 164’10.5’

Senior Valerie Nestor was victorious in the hammer with a bomb of 172’5.25” and senior Stephen Leach claimed first with a mark of 184’8.0″ in the men’s.

As a cherry on top, Thayer and Leach each finished first in the men’s and women’s shot put, respectively. Thayer’s 43’5.0” mark was good enough for her second win of the day, and it took Leach a 51’6.5” toss to follow suit.

“This was the best roundup I think I’ve witnessed for my group,” said Associate Head Coach Cody Fleming of the throwers, the group of athletes he works with in training.

In last year’s All-UC Meet, the Gauchos lost in heartbreaking fashion, with the meet undecided until the last relay and UCSB finishing second by just one point. With a win in their pockets at the first outdoor meet of the year, Head Coach Pete Dolan will be hoping his team can repeat its Roundup success and string together a couple of strong showings that could set the foundation for a really impressive year.

The All-UC meet will begin on Saturday, March 4 at the Triton Track & Field Stadium.