The Daily Nexus
Track and Field
UCSB Track and Field Comes Home to Host Gaucho Round Up
February 16, 2017 at 5:02 am by Ryan Burns

In its last indoor meet of the season at Boise State earlier this month — the Jacksons/NB Invitational — the UCSB women’s track and field team finished the meet with a flurry of personal records in all disciplines.

In its last tune-up before the outdoor season begins with the Gaucho Roundup on Saturday, Feb. 18, UCSB will have had two weeks to train to build off of the strong team showing in the last two meets. 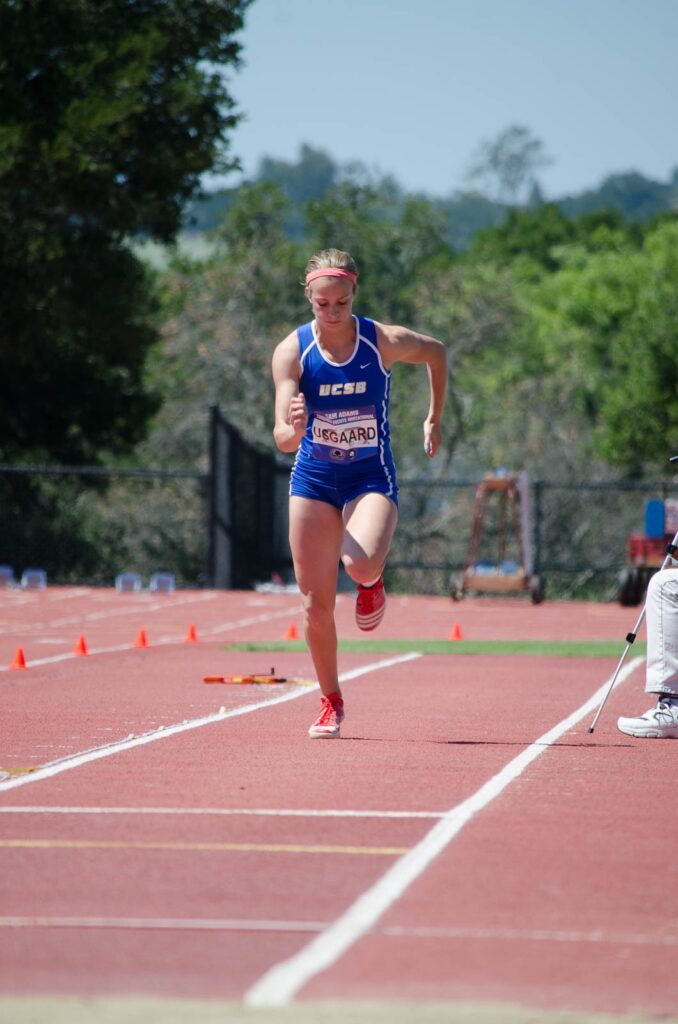 Competing in the heptathlon, Tori Usgaard runs towards the sand to perform the long jump. Christina DeMarzo / Daily Nexus

Competing outdoors for the first time this year, the athletes may take some time to adjust to jumping and throwing in the wind, but if last weekend was an indicator, the Gauchos are primed for a great first meet.

The Gaucho Round Up event will be the first form of compeition for the men’s track and field team this season.

Surely, both the men’s and women’s track and field teams will savor UCSB’s annual event as it will be the only home event for the Gauchos for the remainder of the year.

UCSB’s top sprinters at the Jacksons Invite were seniors Tori Usgaard, who qualified for the 60m final with the fastest prelim time (8.72) before finishing second in the final, and Betsy Armitage, who finished third in the 400m with an indoor PR of 57.78.

Junior Morgan Simpson finished just behind Armitage in fifth (58.10), and sophomore Alanna Epps capped off the sprint team’s showing by qualifying for the 200m final and posting a new best time of 25.50.

The veteran team was able to fight their way into a medaling position, finishing third with a time of 3:56.32.

After sophomore Jazmin Moss’s dominant showing in the Boise St. Invitational in January, she was expected to lead the jump team into the outdoor season.

However, sophomore Cassidy Peng announced herself as one of Santa Barbara’s best jumpers with her performance last week.

The sophomore posted a lifetime best mark at 18’2.5” in the Long Jump, good enough for fourth place.
Peng must’ve felt good that day, because she also broke her triple jump record later in the meet with a 37’9.25” mark, finishing in fifth, topping off the best meet of her young collegiate career.

Moss still had a strong meet for herself as well, finishing fourth in the triple jump at 38’4”. She also posted a respectable 17’6” in the long jump.

With Peng and Moss so close in level, the teammates’ friendly competition will help the two develop with more meaningful dual meets and conference meets about a month away.

Santa Barbara also improved as a team in the throws from their last meet, with senior Valerie Nestor cracking the top five in the weight throw with an impressive 50-plus-foot throw (15.82m). Junior Kayla Thayer was the second-highest finisher in the event for UCSB in 12th at 14.71m.

Thayer also recorded a team-best shot put mark of 13.02m, the only Gaucho over 13m, good enough for eighth place. Sophomore Samantha Ruggles was right behind her, though, finishing ninth with a 12.67m toss.

With the Gauchos ready to host their outdoor season warmup meet at neighboring Westmont College, the women’s track and field athletes will feel good with their level of fitness and training at this point in the year, and improvements are sure to come.

A version of this story appeared on p. 6 of the Thursday, February 16, 2017 print edition of the Daily Nexus.