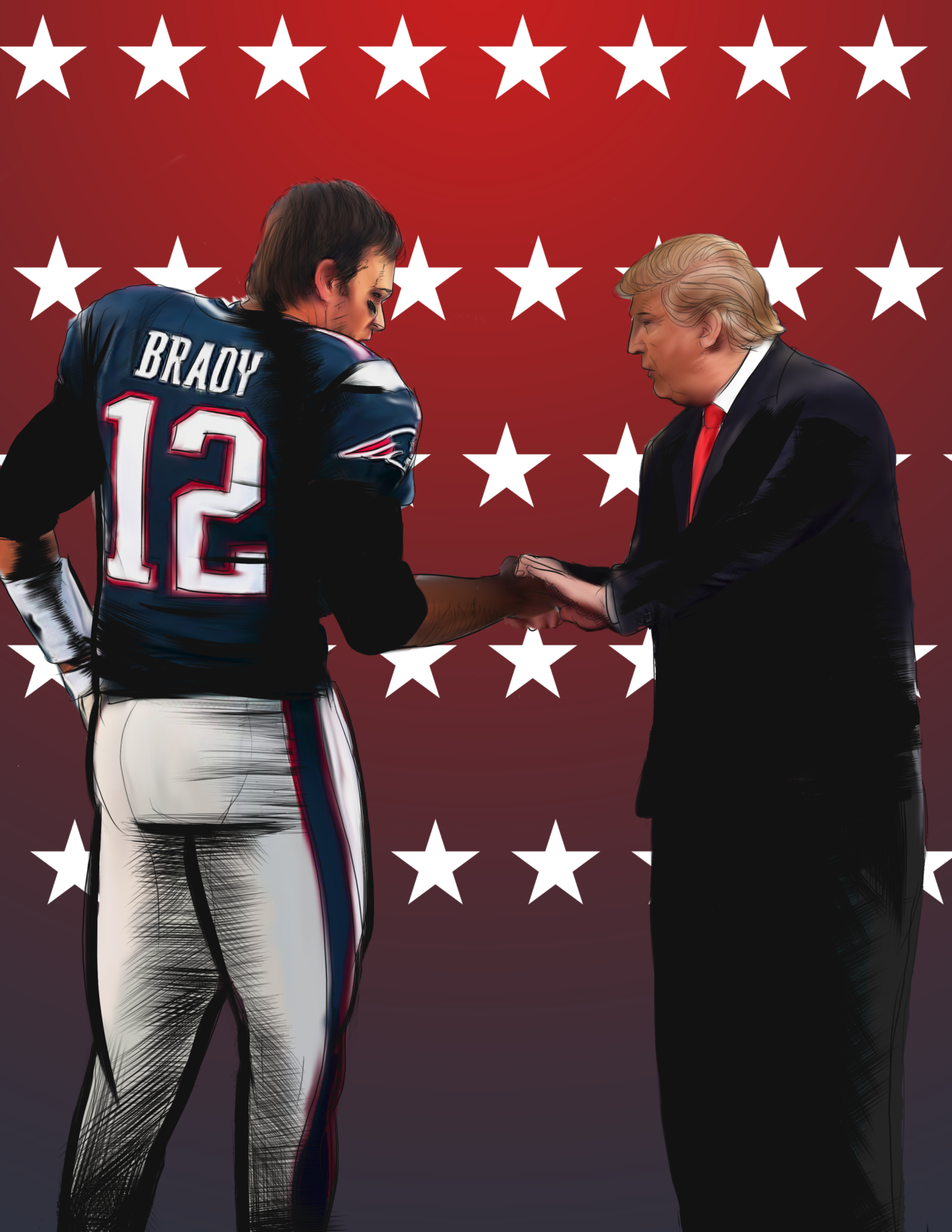 Yesterday, the New England Patriots played in their eighth Super Bowl, seven of which have come during the Tom Brady-Belichick era. They faced the Atlanta Falcons in Super Bowl LI, and won in spectacular, comeback fashion.

Despite their success, the Patriots have consistently been one of the most hated teams in the National Football League. According to a  recent ESPN poll, the New England Patriots are the most disliked team in the league, surpassing Dallas, and that was before Sunday’s triumph.

While this sort of friendly politicking is common in sports, I have always been puzzled by the amount of scorn that a lot of NFL fans feel toward the Patriots. After all, they are the team comprised mostly of under-the-radar players, undrafted free agents and perennial Super Bowl contenders. They are far from a boastful team — in fact, Coach Bill Belichick is widely respected across the NFL for his humble and business-only approach to the game, which has become so characteristic of the Patriots over the years.

While scrolling through Twitter after the Patriots remarkable victory, it became clear to me that most football fans envy the New England Patriots simply because they perceive the Patriots and Tom Brady to be the alphas of the National Football League. Who can blame them? Tom Brady went from being an overlooked dorky-looking college kid from the University of Michigan drafted in the sixth round of the NFL draft to being a future first-ballot Hall of Fame player, five-time Super Bowl champion and married to supermodel Gisele Bundchen. Scandals throughout his career like Deflategate and Spygate have been petty attempts to delegitimize his consistent success, in my opinion.

Tom Brady’s scouting report from the 2000 NFL Combine seems as laughable as the Huffington Post poll giving Hillary Clinton a 98.2 percent chance of winning the presidency the day before the election: “Poor build. Very skinny and narrow. Ended the ’99 season weighing 195 pounds and still looks like a rail at 211. Looks a little frail and lacks great physical stature and strength. Can get pushed down more easily than you’d like. Lacks mobility and ability to avoid the rush. Lacks a really strong arm. Can’t drive the ball down the field and does not throw a really tight spiral. System-type player who can get exposed if he must ad-lib and do things on his own.”

Speaking of which, the Wall Street Journal gave the Falcons a 91.6% chance of winning the Super Bowl at one point. This earned mockery from Donald Trump Jr., who tweeted out, “Where have I seen stats like this before???” The analytical “experts” in editorial boards should really stay away from the prediction business.

Where have I seen stats like this before??? 😂🇺🇸🇺🇸🇺🇸 https://t.co/2KNR5BlTFE

In light of all this, it’s hard not to notice the parallels between the Patriots championship run and the 2016 Trump campaign. In fact, Tom Brady and Bill Belichick both supported President Trump, becoming some of the very few sports figures to be brave enough to do so. Belichick’s endorsement sounds a lot more cheerful than the painfully unenthusiastic Hillary endorsement from Lebron James:

“Congratulations on a tremendous campaign. You have dealt with an unbelievable slanted and negative media, and have come out beautifully. You’ve proved to be the ultimate competitor and fighter. Your leadership is amazing. I have always had tremendous respect for you, but the toughness and perseverance you have displayed over the past year is remarkable. Hopefully tomorrow’s election results will give the opportunity to make America great again. Best wishes for great results tomorrow.- Bill.”

Since the day he announced his campaign, any objective observer could see that the mainstream media was participating in a large effort to distort all of Donald Trump’s words and misrepresent everything he said. Sure, some of the criticism was justified. Backlash from the dismal “p***y” tape was appropriate as well as the Mexican judge comments that Speaker Paul Ryan described as “textbook racism.”

But for the most part, the unrelenting assault and demonization on Trump and his supporters from the mainstream media stemmed from a wild misinterpretation of his campaign speeches. The complete meltdown of all the television anchors on election night that spent the entire year portraying Trump as a forlorn candidate was fun to watch.

Such was the Tom Brady Deflategate scandal. After a 45-7 whooping of the Indianapolis Colts in the 2015 AFC Championship game, allegations arose accusing the Patriots of purposely under-inflating the footballs in the rainy game. After a very long investigation into the matter by NFL executives, a federal court ultimately upheld Brady’s four-game suspension imposed by the NFL.

Even though the Patriots won Super Bowl XLIX that year, many in the sports media questioned Brady’s legacy status and that of Belichick’s. Many pointed to the Deflategate scandal and claimed it made the Patriots illegitimate Super Bowl champions, even after an MIT study concluded that no deflation ever happened. For many, it wasn’t the fault of the horrible Colts defense that helped the Patriots win; it was due to an unproven story about a deflated football. This sort of refusal to accept weaknesses as reason for one’s own failure was on large display after the presidential election.

During the presidential transition period, Hillary Clinton and the mainstream media went on a wild campaign to convince the American people that “fake news” and Russian interference were responsible for Donald Trump’s victory and not her own incompetence. Evil Russian hackers and “fake news” outlets were responsible for the Democrats’ devastating loss, they said.

It wasn’t that Hillary Clinton was the most corrupt person to ever seek the presidency, that the American people were fed up with the identity politics of the Left or that the lack of enthusiasm for Hillary Clinton resulted in her inability to draw large swaths of the Obama coalition out to vote. None of these were reasons for her defeat, according to many on the Left. No, it was because of the Russians!

The New England Patriots victory on Sunday was poetic justice to a sports world that has witnessed a year of some athletes disrespecting the American flag. Not only because of the Patriots’ mascot, but also because of their story of dominance over the last two decades. In a way, Brady’s story is the American dream. He did not start in his high school JV team, struggled to start at University of Michigan, and is now the winningest QB in Super Bowl history. That sort of relentless work ethic is to be admired. Meanwhile, Colin Kaepernick and the Castro-loving wing of his followers celebrate their two wins this season as they continue to kneel.

What an amazing comeback and win by the Patriots. Tom Brady, Bob Kraft and Coach B are total winners. Wow!

In a time when our country needs healing, it is refreshing to see a Super Bowl champion whose mascot literally resembles the colonists who rebelled against British control to gain American independence. The Patriots’ Super Bowl XXXVI victory a few months after 9/11 helped a devastated nation feel American pride.

Tom Brady became the all-time leader in Super Bowl victories with a win on Sunday and it came at a time when his longtime friend has just become the vibrantly and unapologetically patriotic President of The United States. It’s almost as if Brady took his winning strategy straight out of Trump’s playbook: “make it seem like I have no chance, then shock everybody at the end.”

In many ways, the Super Bowl felt like election night all over again, complete with an extremely improbable comeback, a shellshocked media, and even bitter fans tweeting out #NotMySuperBowlChamps tweets. Since the Patriots are so disliked, at least we could say that the Atlanta Falcons won the “popular” vote.  Now, Tom Brady gets to visit his longtime pal President Trump in the White House.

Gerardo Banuelos is a sports and politics enthusiast.