Saturday night was a shooting clinic for the UCSB women’s basketball team as it set a new program record with 15 made three-pointers in its 85-60 victory over UC Irvine. In addition to tallying a season-high in points, the Gauchos also finished the game with a season-high 23 assists and 42 bench points. 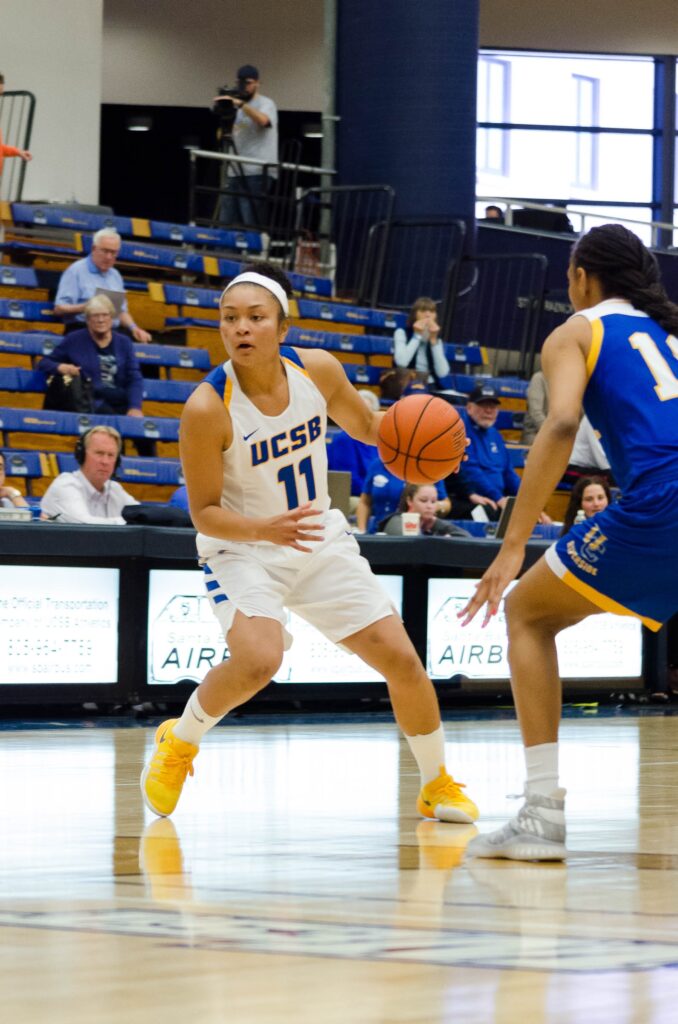 In just her second career start ever, freshman guard Aliceah Hernandez went off for a career-high 21 points, seven made three-pointers, and played a total of 33 minutes. She shot 7-for-10 on the night, attempting and making all of her shots from beyond the arc.

Hernandez made her first career start in the team’s previous game at Cal State Northridge, in which she recorded a former career-high of 13 points.

After splitting its two-game road trip, UCSB managed to get back to an even 10-10 record and is 5-2 in Big West play, ranking third in the conference standings. It was the fourth consecutive loss for the Anteaters, placing them in eighth at 3-18 and 1-6.

UCSB’s three-point shooting barrage was active from the game’s first quarter as it went 7-10 from long distance. All but one of the Gauchos’ eight field goals were made from downtown as they made seven-straight to close the period.

Both Hernandez and redshirt sophomore guard Sarah Porter, who returned from injury after sitting out the game at CSUN, were spot-on from long range. Each scored nine points in the opening period to power UCSB’s 23-7 run. Limited to 11 minutes, Porter was proactive with her time on the court as she ended with 15 points on 5-8 three-point shooting.

UC Irvine, who was without two starters due to injury and had just three players coming off its bench, couldn’t find its rhythm on the offensive end. The Anteaters ended the first period with more made free-throws at 4-4 than field goals at 3-for-10.

Scoring one of UCI’s field goals and half of their free-throws was senior forward Shereen Sutherland. She had a team-high 20 points on 5-for-11 shooting and a career-high 10-of-11 free-throw performance. Still, the Anteaters trailed 23-11 at the end of the quarter.

Senior point guard Onome Jemerigbe silently had an efficient performance of 12 points on 4-for-6 and 2-for-2 three-point shooting.

Also making an impact was the emergence of UCSB’s bench. Redshirt junior point guard Drea Toler and sophomore guard Makala Roper each were effective as Toler was fearless in her drive for layups and Roper followed suit along with displaying her midcourt range.

A made layup by Roper gave the Gauchos a 43-19 advantage with 1:37 remaining before the half. She ended the game with nine points, while Toler had 12 points and a team-high three steals. Hernandez scored UCSB’s last basket of the quarter with a three-pointer.

Although UCI’S senior forward Brittany Glassow responded with a three-point make of her own, it did not have much of an impact on the Anteaters’ deficit as they trailed 46-24 at halftime.

Glassow led Irvine’s small bench rotation with six points on 2-for-3, 1-for-1 three-point shooting and tied for the team-high of six rebounds in 29 minutes of play.

Similar to how they both started the game, both Hernandez and Porter sustained their hot shooting hands in the second half. Pouring on makes from three-point land, both backcourt players went 2-for-3 from behind the perimeter.

Porter was responsible for six points during the Gauchos’ 8-0 run in which they tallied their largest lead of 30 points at 60-30.

UC Irvine’s spark came from Sutherland with nine points and senior guard Irene Chavez with five points but would not be enough to prevent the Gauchos from entering the fourth quarter 73-44 lead.

A 5-0 run to open the fourth quarter showed the Anteaters’ unwillingness to accept defeat, but they couldn’t contain the Gauchos from closing out the game behind the play of Toler.

Toler scored three-straight layups, scoring the majority of the team’s five field goals in the quarter. Despite its ability to make 18-of-23 free-throws, UCI’s poor shooting of 38.8 percent and 4-for-16 three-point shooting curtailed any chance of it making a comeback as UCSB earned the victory.

UCSB will return to the Thunderdome to face Cal State Fullerton this Wednesday, Feb. 1. at 7 p.m.