After earning its second consecutive 4-1 start in Big West play under the tutelage of Head Coach Bonnie Henrickson, the UCSB women’s basketball team had its four-game winning streak ended by Cal State Northridge in a 75-61 loss Wednesday night.

The loss also knocked UCSB out of a three-way tie with Long Beach State and UC Riverside for first place in the conference. 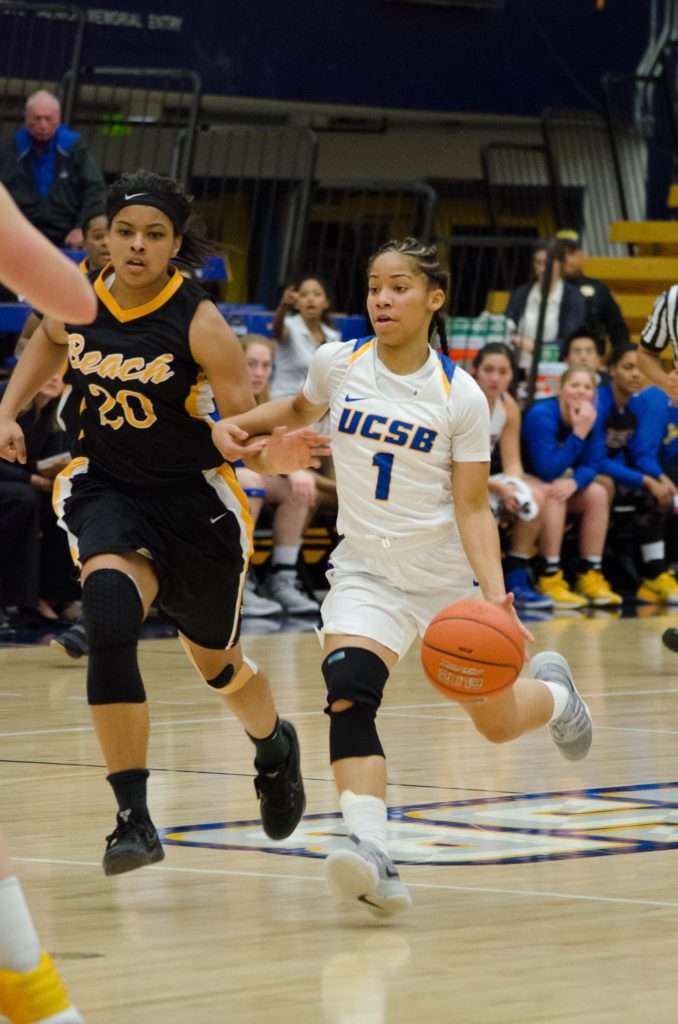 Earning their first win since Jan. 5 in their Big West opener versus Cal State Fullerton, the Matadors ended their four-game losing streak to improve to 9-10 overall, 2-4 and sit at seventh in the conference standings.

Despite four Gauchos tallying double figures in scoring, a majority of Santa Barbara’s shots would not fall down.

For UCSB, redshirt junior point guard Drea Toler recorded a team-high 14 points, while freshman guard Aliceah Hernandez finished with a career-high 13 points on 5-for-11 and 3-for-7 three-point shooting.

Remaining consistent off the bench, Toler recorded her third consecutive game with double figures in scoring.

Wednesday resulted in the Gauchos’ worst shooting performance in a conference game.

They finished the game with a field goal percentage of 40 percent and saw their seven-game streak of at least six made three-pointers in a game come to an end with a 5-for-20 finish from beyond the arc.

There is no timetable for her return. Porter currently leads the Gauchos in scoring during conference play with 13.6 points per game.

The Gauchos were also unable to contain the Matadors’ rhythmic shooting night. CSUN benefited from its backcourt players in both its starting lineup and bench rotation.

After scoring a career-high 25 points last Saturday versus Cal Poly, redshirt junior guard Serafina Maulupe surpassed her career-best total with 28 points in the Matadors’ win over the Gauchos.

Combining with Maulupe for 49 of CSUN’s conference game best 75 points was sophomore guard Cheyenne Allen with a career-high 21 points on 6-for-9 shooting from the field and an 8-for-9 finish at the free-throw line.

In addition to Maulupe and Allen, helping create the Matadors’ hot shooting was their rebounding.

They outrebounded UCSB 47-27 as freshman forward Eliza Matthews had a game-high 12 rebounds and sophomore center Channon Fluker had 11.

UCSB will wrap up its pair of away games for the week against UC Irvine this Saturday. Prior to facing Santa Barbara, the Anteaters will play Hawaii tonight at 9 p.m. PST. They will enter the Stan Sheriff Center at 3-16 and 1-4 in conference play.

Various pieces have contributed to the Gauchos’ upgrade in play since the start of Big West play. A central piece has been the productivity of redshirt junior forward Drew Edelman.

In just her first season as a Gaucho, she has already solidified her role in the paint.
Quick enough to use her pivot foot and strong enough to post up and drive on a defender,

Edelman has been nearly unstoppable as she holds the Big West lead in field goal percentage at 56 percent.

Prior to scoring her lowest point total in a conference game with three on Wednesday, Edelman had posted double figures in four straight games.

Despite grabbing a team-high 10 rebounds, Edelman’s offensive production was missed, as UCSB is 8-3 when she manages to score in double figures.

UC Irvine’s women’s basketball program is in rebuilding condition after its decline in recent years.

En route to its third-straight losing season, the Anteaters have not had a winning season since their 2013-14 run. In the past two seasons, UCI had a combined 12-51 record.

The downward spiral led to the hiring of first-year Head Coach Tamara Inoue during the offseason last April.

Despite losing just one senior from last season, UC Irvine has a multitude of players that lack in-game experience. All five of the team’s current seniors had never started a full season entering this year.

In addition to the hiring of a new coach, the Anteaters are still dealing with the lingering effects of the early departure of their most impactful player last season in former forward Mokun Fajemisin.

On a team that had no double-figure scorer, Fajemisin managed to lead UCI in scoring with
9.2 points per game.

Yet it was her defensive and rebounding abilities that were most pivotal. She led the Big West in blocks per game with a 2.0 average and ranked fifth in the Big West with 7.9 rebounds per game.

She was the conference’s ultimate rim protector as she ended last season with a conference-leading 54 blocks.

Despite boasting an arsenal of three double-figure scorers — senior forward Shereen Sutherland, sophomore guard Andee Ritter and junior forward Sabrina Engelstad — UCI has had ongoing issues with both scoring and defending the ball.

The Anteaters are the Big West’s worst scoring defense, as they allow 72.2 points per game and are second-worst on offense with an average of 58.6 points per game.

UCSB remains one of the conference’s top teams in terms of scoring the ball and playing three-point defense, ranking second by allowing just 63.7 points per game and third as it holds opponents to an average 29.2 percentage thus far.

The Gauchos and Anteaters will tip-off this Saturday, Jan. 28, at 2 p.m. at the Bren Events Center.

A version of this article appeared on page 7 of January 26, 2017’s print edition of the Daily Nexus.