For the first time since the 2012-13 season, the UCSB women’s basketball team possesses an overall record of .500 or above during its Big West schedule after its 74-62 win over Hawaii on Saturday. 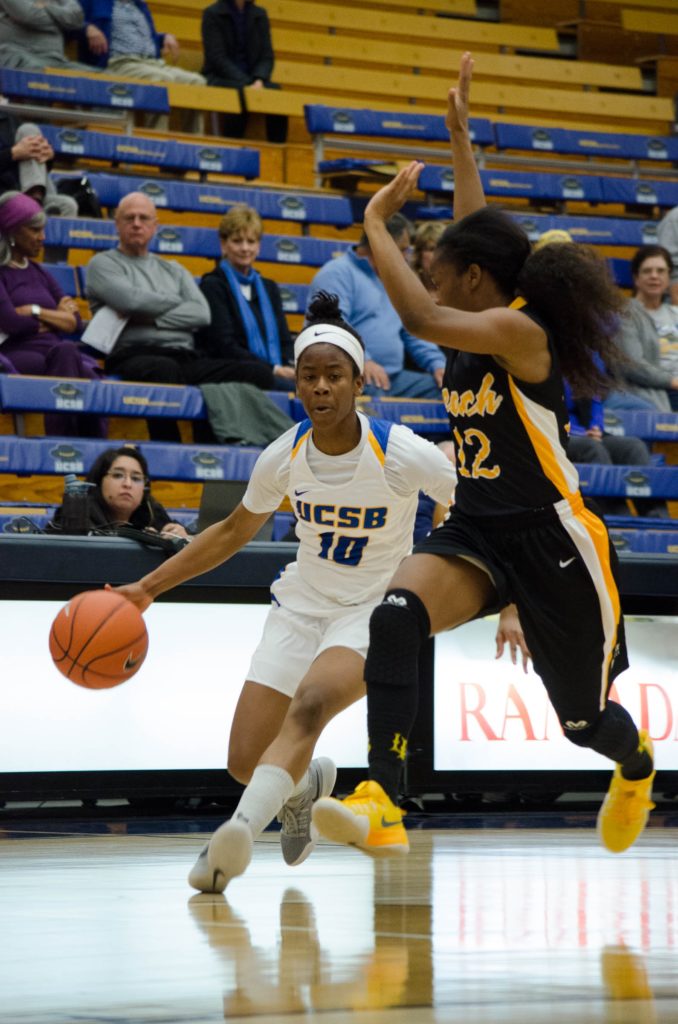 Currently in a three-way tie with Long Beach State and UC Riverside for first place, the Gauchos are 9-9 and 4-1 in the conference, and have now won four games straight. The loss ended the Rainbow Wahine’s four-game winning streak, landing them at sixth in the conference at 6-11 and 2-3.

UCSB posted season-highs in points and field goal percentage at 74 and 53.8 percent, respectively.

It was all UCSB to open the first quarter as the Gauchos shot 69.2 percent from the field and 4-for-5 from behind the three-point line.

The inside-outside game of redshirt junior forward Drew Edelman and redshirt sophomore guard Sarah Porter was in full effect. Porter continued her hot shooting from the last two games, starting 3-for-3 from behind the perimeter. She would end the game 3-for-4 from the field and play just 10 minutes after enduring an apparent shoulder injury.

Playing a major role in the Gauchos’ commanding start was their defense as Hawaii ended the period with five turnovers, in which UCSB capitalized off of with 11 points.

Despite trailing by double-figures 23-9, it was the shooting of junior guard Sarah Toeaina that kept Hawaii within range of reducing its deficit all game. She went 3-for-6 in the first period, signaling the start of her finishing with a game-high 22 points on a 10-for-19 shooting afternoon.

Through the first three minutes of the second period, no basket was made by either team until the 6:41 mark for UCSB on a jumpshot by Toler to give UCSB a 25-15 lead.

She was the Gauchos’ most active player in the period, scoring another basket as a result of a quick stop and go move to surpass the defender for a go-ahead layup and later earned a chase down block before eventually being subbed out.

Toeaina remained the Rainbow Wahine’s primary source of offense with a jumpshot to trim the Gauchos’ lead to 27-21.

With under two minutes remaining in the period, the Gauchos got back to feeding Edelman down low as she scored layups in the team’s last two possessions.

A crucial three-pointer by sophomore forward Lahnia Salanoa brought Hawaii to its lowest first half deficit of five points, 31-26, to go into halftime.

Jumpstarting Hawaii’s offense to its 7-2 run to open the second half was freshman guard Julissa Tago with a three-pointer and midrange jumpshot along the baseline. Tying the game at 33 apiece was Toeaina’s layup with 8:06 left in the third.

Despite her reduced role this season, junior guard Makala Roper provided a quick surge off the bench with a three-pointer to end the tie and put UCSB up 36-33.

From that point on, UCSB maintained a lead for the remainder of the game.

Providing a scoring outburst during the run was freshman guard Aliceah Hernandez which included back-to-back three-pointers, increasing UCSB’s lead to 45-37, she scored all eight of her points in the quarter while shooting 3-for-5 and 2-for-4 from deep.

Hawaii took advantage of UCSB’s scoreless play in the final 3:54 of the third as Toeaina would score two consecutive layups to help the Rainbow Wahine enter the game’s final period down 50-45.

In the fourth quarter, UCSB looked like the team it was to open the game as its grittiness was on full display as it embarked on an 8-0 run. Its offense was most efficient in the period, shooting 72.7 percent and 50 percent from behind the three-point line.

An offensive charge led to the Gauchos’ first possession. Scoring five of the eight was Edelman, putting her pivot foot to work and posting up for a turnaround AND-1 layup in which she converted at the foul line.

Scoring the other three in the team’s next possession was Jemerigbe’s drive and circus layup that fell as she drew a foul that led to her making a free-throw to increase Santa Barbara’s lead to 58-45.

A three-point make by Toler extended UCSB’s run to 11-3, but responding with a three of her own was senior guard Briana Harris to cut Santa Barbara’s lead to 61-51.

But the three-point shot wouldn’t be Toler’s last as she scored 10 points straight to give UCSB a 68-57 advantage.

A quick jumpshot by Toeaina trimmed Santa Barbara’s lead to 66-57, but the Rainbow Wahine were unable to draw any closer as time continued to expire.

With a 10-point lead of 68-58, helping secure the Gauchos’ 74-62 win was the veteran leadership of Jemerigbe. With the ball at the top of the key as time went by, Jemerigbe drove the right lane for a layup, came up with a steal in the game’s lasting seconds, and was clutch with a 4-for-7 finish at the free-throw line.

With its three-game home stand now over, UCSB will be on the road at Cal State Northridge on Wednesday, Jan. 25. The game will begin at  7 p.m.