The Daily Nexus
Nexustentialism
It's satire, stupid.
Chancellor Yang Washed Away by Floods
January 23, 2017 at 11:30 am by Ariana Marmolejo 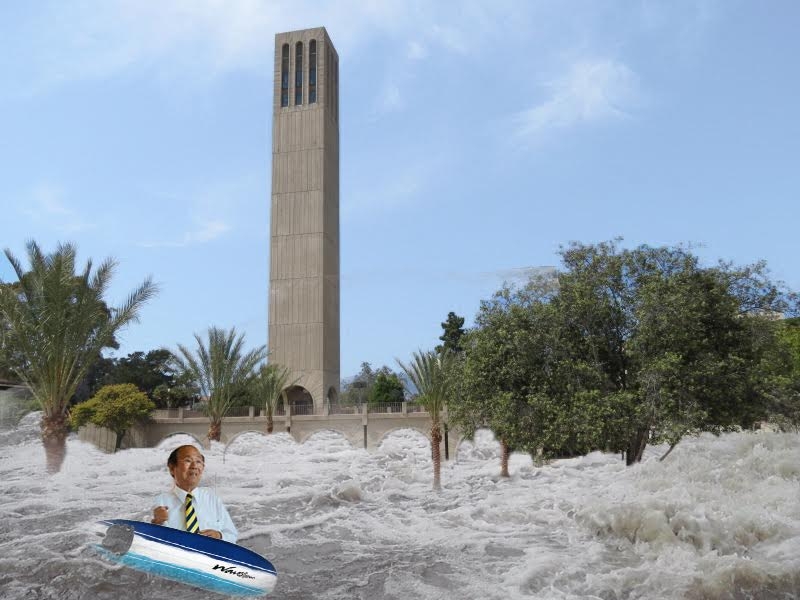 After intense rainfall and mass flash flood warnings, it appears that one person within the UCSB community was not aware of the potential dangers that the storms have created. It was confirmed by authorities that Chancellor Henry T. Yang has been caught in the rainwater and washed away with the flood. His location is currently unknown, and all of the university’s resources have gone to finding him and bringing him home safely.

His wife, Dilling Yang, was the one to first report the unfortunate accident. Since he was washed away, she has been home, minding her business as usual. When asked for comment, she simply stated, “he does this every time it floods. I am not concerned.”

It would appear that he first got caught in the flood around Storke Tower and has since been seen floating down Del Playa, holding on to a rogue surfboard.

“Ha ha, yeah, I thought I saw Chancellor Yang floating down DP,” stated fourth-year global studies major Matt Williams, a resident of the 66 block. “I thought I was tripping, so I went back to bed.”

This is the only lead authorities currently have.

According to an inside source within the fire department, he usually washes up safely around Sands Beach, where he likes to admire the tide pools until someone comes to pick him up. There are emergency personnel groups currently stationed along the beach, waiting with blankets and hot cocoa for when Yang appears. They have been instructed to let him look at the sea anemones before bringing him home. Updates on Yang’s whereabouts to continue.

Ariana Marmolejo enjoys swimming in floodwater and splashing in puddles.