After spoiling UC Riverside’s undefeated start to Big West play over the weekend, the UCSB women’s basketball team once again has that opportunity as it prepares to face Long Beach State tonight at the Thunderdome.

Currently 7-9 with a 2-1 conference record, UCSB has a chance to reach the .500 mark in its final two matchups of its three-game home stretch. 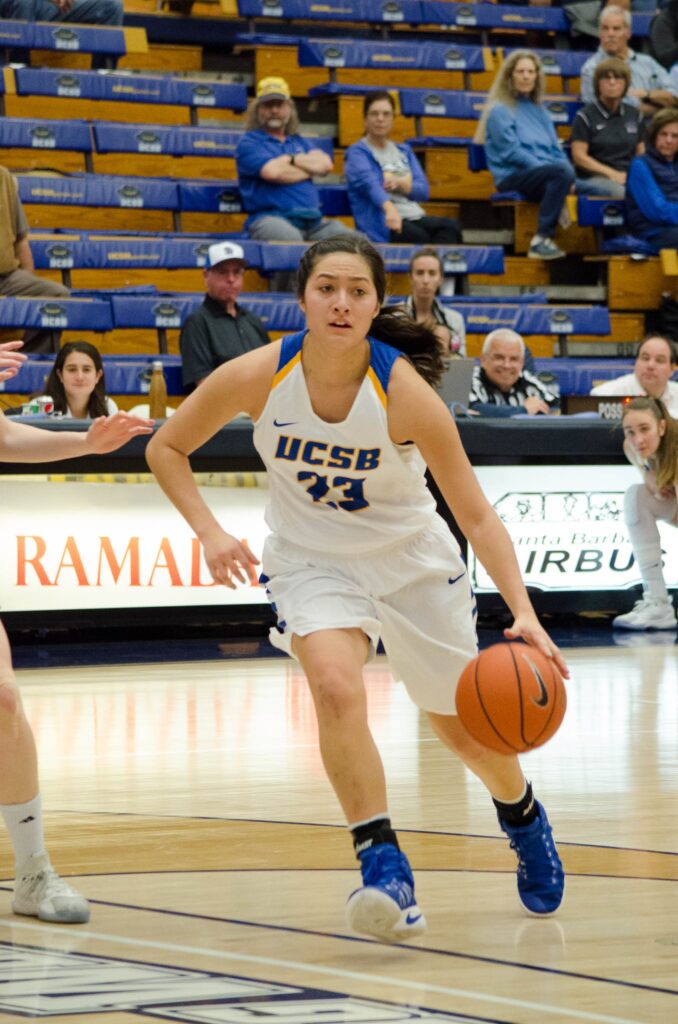 UCSB can anticipate another intense battle against a 49er team that has won four-straight and is yet to concede a conference defeat this season.

Projected to finish atop the conference standings in the Big West media and coaches’ preseason polls, Long Beach State has met expectations thus far and will enter in first place at 12-6, 3-0.

Tied for third place in the conference standings at the moment, UCSB looks to extend its two-game winning streak. The hot shooting hand coming into tonight’s game is redshirt sophomore guard Sarah Porter.

Porter is the Gauchos’ leading scorer since the start of Big West play at 14.0 points per game. She is coming off a career-high performance of 22 points, four three-pointers made, four steals and six free-throws made in the team’s 58-54 win over UC Riverside on Saturday.

In addition to the victory, she earned her first ever Big West Athlete of the Week award.

Porter has established herself as one of UCSB’s sharpshooters alongside sophomore guard Coco Miller as both are tied for the team lead in three-pointers made at 35 apiece, which ties them for the third most three-point makes in the Big West.

Distributing the ball to these shooters has been the precise court vision of UCSB’s backcourt duo of point guards senior Onome Jemerigbe and redshirt junior Drea Toler.

Jemerigbe places in second and Toler in third in assists per game at 4.4 and 4.2, respectively; the two have combined for a total of 138 assists.
“We’ve talked a lot as a staff and with our players about improving our decsion making,” Henrickson explained. “Whether we should drive it, should we drive it baseline, or should we drive it middle? No great shooter ever stands still. Your job is to reward the player that’s driving and sucking up some defense to find a window and moving without the ball. We’re an unselfish group. We recognize it’s not your shot, it’s our shot.”

The Gauchos were stellar on the defensive end as well, recording season-highs of 16 steals and 24 forced turnovers, respectively. Through three conference games, UCSB leads the Big West in forced turnovers per game at an average of 18.0.

“For us to be disruptive, get our hands on[the ball], and increase the number of turnovers that we create [will be important],” Head Coach Bonnie Henrickson said.

However, Long Beach State presents a dual threat on both ends of the court, owning an overall conference best average of 21.1 forced turnovers per game, and they have been efficient when possessing the ball with just 14.7 turnovers per game for second best.

Boasting a 39.7 three-point percentage, which ranks second best in the conference, the 49ers visit with tons of momentum shooting the ball after knocking down 14 three-pointers, second most in a single-game in program history, in their 83-80 victory over Cal Poly on Saturday.

The Beach concluded the game with a season-high 50.9 field goal percentage and was led by the outstanding play of senior point guard Anna Kim, who had 25 points on 7-for-10 and 4-5 three-point shooting, four rebounds, five assists and two steals.

Despite not being one of the 49ers’ double-figure scorers, Kim has managed to be effective with her shot selection as she leads both the Big West and Long Beach State with a 50.0 three-point percentage, holds the team lead in field goal percentage at 46.5 and plays the most minutes per game with a 26.4 average.

At the core of the 49ers’ offense, helping create space around the perimeter is senior forward Madison Montgomery.

Long Beach’s leading scorer at 11.3 PPG, Montgomery is most effective defending the ball in the paint.
She ranks fifth in the Big West in both blocks per game and total blocks at 1.2 and 22, respectively.

Montgomery can stretch the floor as well, tied for third on the team in three-pointers made at 15 with senior guard Raven Benton.

Success from beyond the arc is pivotal for both teams in this matchup as the 49ers own a conference high in three-pointers made at 155.
Meanwhile, the Gauchos have defended the long distance shot superbly, allowing just 65 made three-pointers and ranking third in three-point defense at 28.8 percent.

“You have to recognize personnel. If you cushion them, they have players that go ‘hand down, man down’ and will shoot it on you,” Henrickson said. “If you go under an on-ball screen, they’re going to shoot behind it. If you make a mistake and don’t know that you’re guarding a shooter and there’s penetration coming at you, you have to ball side deny and that help has got to come from the back side.”

Going against a Long Beach State team that has the ability to get hot from long range, UCSB will have to remain committed to the importance of on-ball pressure in hopes of preventing any type of shooting rhythm for the 49ers’ offense.

Tonight’s matchup between UCSB and Long Beach State will begin tonight at 7 p.m. at the Thunderdome.