The Daily Nexus
Science & Tech
Could This be the Brightest Supernova Ever Observed?
December 26, 2016 at 10:00 am by Kirstie Allen

“If we didn’t have the right calculation, we’d fly right into a star or bounce too close to a supernova, and that would end your trip real quick, wouldn’t it?” said Han Solo. To jog your memory, this was said to Luke Skywalker in Star Wars: Episode IV – A New Hope.

In 2015, astronomers discovered what was believed to be the brightest supernova ever observed. This event was called ASASSN-15lh.

Discovered by the All Sky Automated Survey for Supernovae (ASAS-SN), about 3.8 billion light years away, ASASSN-15lh occurred at or close to the center of the galaxy with a supermassive black hole. The ASAS-SN project used robotic telescopes to survey the sky, equipped with large-field-of-view digital cameras, looking for new sources of light. The objective was to discover and study new supernovae and other “astronomical transients.”

“At first, some groups thought it was a supernova, but if so, it would be the brightest ever discovered and really push the bounds of what we think a supernova can do. It does some things we’ve never seen a supernova do, like re-brighten in ultraviolet light.” said Andy Howell, adjunct professor in UCSB’s Department of Physics and staff scientist at Las Cumbres Observatory.

A supernova is the explosion of a star that has reached the end of its life. It’s the largest explosion that takes place in space.

However, new information leads astronomers to believe that ASASSN-15lh is a tidal disruption event (TDE).

“A star that gets too close to the supermassive black hole could be torn apart by strong gravity of the black hole. As it gets torn apart, a bright flare of light can be produced. We call these tidal disruption events (TDE).” said Iair Arcavi, Einstein Postdoctoral Fellow at UCSB. 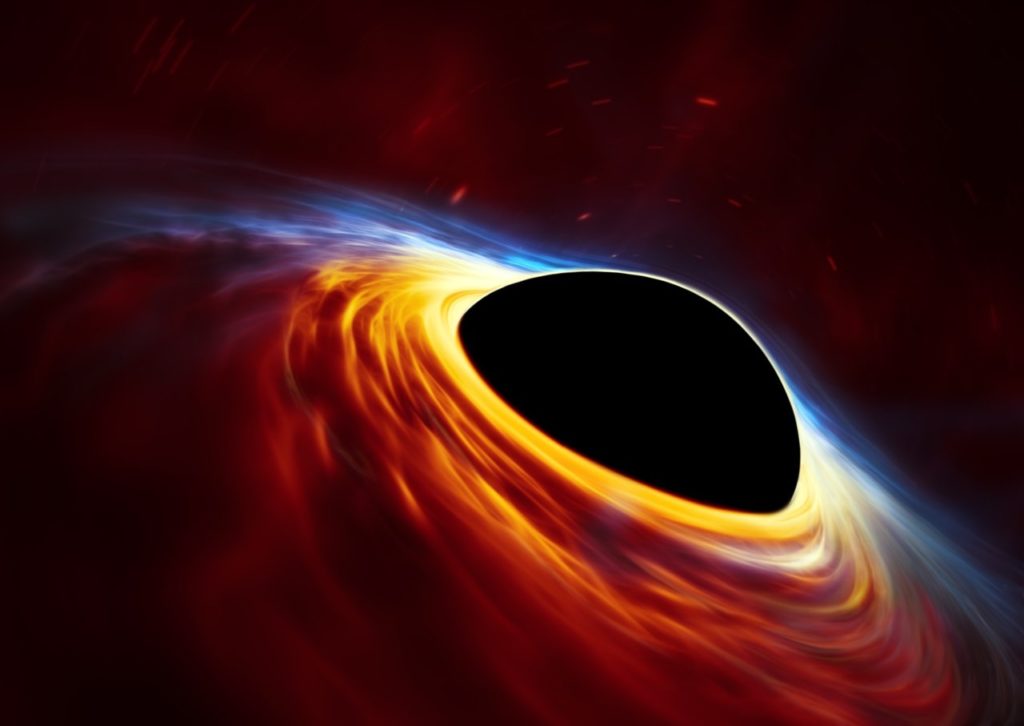 This artist’s impression depicts a rapidly spinning supermassive black hole surrounded by an accretion disc. This thin disc of rotating material consists of the leftovers of a Sun-like star which was ripped apart by the tidal forces of the black hole. Shocks in the colliding debris as well as heat generated in accretion led to a burst of light, resembling a supernova explosion. / Courtesy of ESO, ESA/Hubble, M. Kornmesser

For this to be a TDE, the black hole would have to be spinning rapidly. According to Howell, they have never been able to measure the spin of a black hole by watching a star being torn apart.

ASASSN-15lh was a mystery. It was most the luminous supernova known, but was unclear if a supernova could even produce as much energy as ASASSN-15lh. Furthermore, the features seen in the ASASSN-15lh spectrum, such as its light splitting into multiple colors, had never been observed before then.

In 2016, a paper published in the journal Science argued that ASASSN-15lh was an extreme supernova . However, the galaxy in which it occurred did not have many massive stars and ASASSN-15lh was likely the result of the explosion of a massive star. Arcavi states this interpretation did not convince everyone.

“In our Nature Astronomy paper, we claim that ASASSN-15lh might have been a tidal disruption event and not a supernova,” said Arcavi. “The supermassive black hole in the center of the galaxy where ASASSN-15lh happened should be a few hundred million times more massive than the sun.”

“Our network of telescopes have capabilities that even NASA telescopes in space don’t have.” said Howell.
Their findings can be found in the inaugural issue of Nature Astronomy.