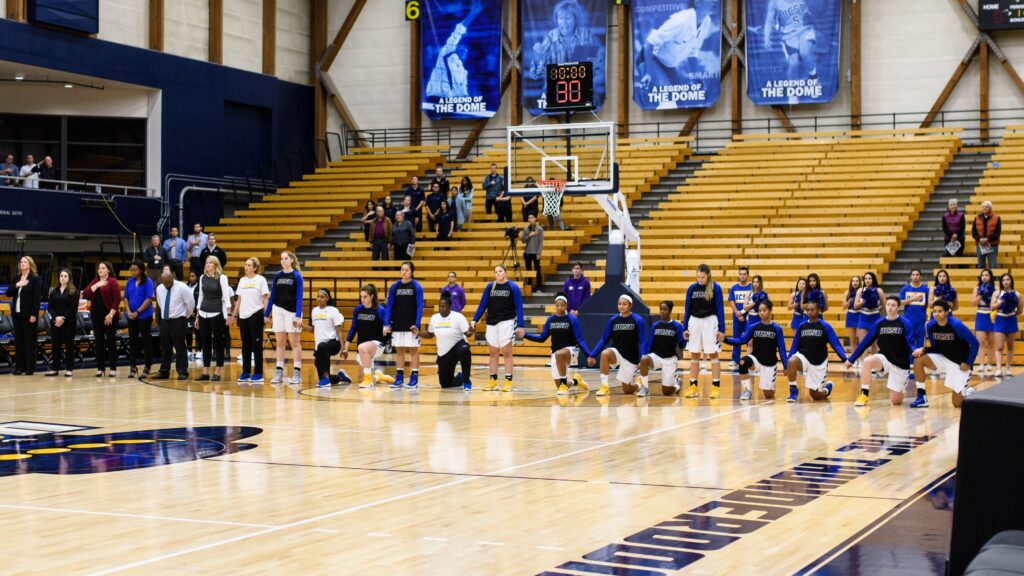 Athletes take a knee during the national anthem at the game versus Santa Clara. Eric Swenson / Daily Nexus

More than half of the players on the UCSB women’s basketball team have taken to kneeling during the national anthem procession, beginning at the team’s exhibition game versus Cal State Los Angeles on Nov. 6.

The team is the first at UC Santa Barbara to join professional and college athletes across the country in silently protesting police brutality and the oppression of minorities by either kneeling or sitting during the playing of the anthem, following 49ers quarterback Colin Kaepernick’s initial demonstration in August.

UCSB Director of Athletics John McCutcheon released a statement on Tuesday to Fastbreakers, the UCSB women’s basketball program official booster organization, and other team supporters to address frustrations over the athletes’ decision to kneel.

“We understand that many of you are deeply offended that they have chosen to make this statement during the playing of our national anthem,” McCutcheon said in the statement. “Some of you have been moved to no longer support the team, and we respect your position. Others, however, have supported their act of a peaceful demonstration of their beliefs, and this we respect as well.”

McCutcheon also said the motivation for the act is personal to each student athlete and that the athletic department’s primary mission is to assist Gaucho student athletes in their educational, athletic and social growth.

“It is not for me to attempt to convey why they feel so deeply compelled to do so other than to say it is their way of expressing concern and support for advances in the many areas of social injustice that exist in our world today,” McCutcheon said in the statement.

In addition to fundraising money for the program’s operations, the Fastbreakers serve as a fan base that provides support at both home and away games, allowing fans to build personal relationships with the players and coaches.

“We understand that many of you are deeply offended that they have chosen to make this statement … some of you have been moved to no longer support the team, and we respect your position.”         -John McCutcheon

In his statement, McCutcheon acknowledged that, despite the sense of family within the program, not all members will always find a way to get along, something he deeply regrets.

In an exclusive interview with NFL Media in late August, Kaepernick said he understood the risks when he chose not to stand to demonstrate pride in the flag.

“I am not looking for approval. I have to stand up for people that are oppressed,” Kaepernick said. “If they take football away, my endorsements from me, I know that I stood up for what is right.”

The women’s basketball team could not be reached by the Nexus as team staff instructed against commenting to media concerning the decision to kneel.

UCSB will be on the road for its next two games, facing Loyola Marymount this Friday at 7 p.m. at Albert Gersten Pavilion.

What a packed arena – was that a sellout game?

Are you stupid or just have difficulty with English language and/or your vision?

I suppose any of these options would ensure that a coherent response to my (rhetorical) question unlikely (I am reasonably certain that if someone explains my post to you you will take the necessary steps to prove me correct).

? What gave you the idea that I have difficulty with English language?

Well, if your misuse of “packed” and “sellout” was intended as sarcasm, your attempt was so lame I felt it unkind to label your comment as sarcasm. Trying to be considerate, I decided that an explanation that would put you in a better light would be to assume that English was not your native language.

I suppose the other possibilities I mentioned still are in play.

? And what would those possibilities be? That I’m stupid? You possess the ability to gauge a person’s intelligence by reading once sentence? That’s truly amazing I must say. Maybe you’re just a miserable person who does not like to laugh or joke around. Have you considered that possibility?

Now I can assess the “probability” — in virtue of your having provided additional evidence.

For example, “You possess the ability to gauge a person’s intelligence by reading once sentence? ” That is not a coherent sentence. Neither is the following offering. Nor the nest (omitted question mark).

Thanks for the generous provision of additional evidence. Case closed.

I hope you are not also the poster below. That would suggest you are a knuckle dragging racist (to say the very least).

Typo you dumb bitch – should have read “one sentence.” Are you really going to nitpick the fact that I didn’t state “Do you possess the ability…” We’re not turning in papers for grading here.

Apparently you do not have the capacity to see your (this and the others) grammatical goofs. BTW: “Once” is not a typo for “one”. It is simply improper grammar (i.e., the stupid use of language. A typo is the placement of a wrong letter (like my nest instead of next). It is the wrong spelling , not the substitution of the wrong word. Perhaps English is not your first language? Perhaps thought is a second language as well?) “Typo you dumb bitch” — brilliant use of English language. This is like shooting fish in a very small bucket. “We’re not… Read more »

? Really? You still have not answered my question. You decided to deflect the question – aka Hillary Clinton style, because it was not “coherent” and because I formed a “nest.” So I will ask again – do you possess the ability to determine a person’s intelligence by reading one sentence? Maybe the Nexus should do more newsworthy stories on the women’s basketball team – like why the Thunderdome is so empty during the games, or why some of the women on the team choose to look like men, or why no one on the team can dunk. I’d be… Read more »

I see it was you (or a very kindred spirit) who posted the shamelessly racist comments. The Nexus should have filters. This is not the proper place for KKK folk to post (you have you sites — find them). I will answer you. Assume I could not validly assess your intellect via a single post. Fine. But now I have additional samples of your mental capability and can now conclude with reasonable certainty that you indeed are a moron. Please tell me you are not a current or previous student at UCSB. If you are (were), it would cast serious… Read more »

OK, I’m not a current student and I’ll leave it at that. Are you? My first post about the attendance was a simple joke and since you decided to say I’m stupid and post a complicated response, I continued to post – mostly nonsense. Rest assured I understand the English language and the concept of forming and punctuating a sentence. Don’t take anything I post too seriously. It seems we both have a little too much time on our hands. Adios.

I think you “hit the nail right on” with that observation. Adios.

And who are the two “dudes” kneeling on the right? Are they guys, or just butch fucking dykes who want to look like dudes? Makes me sick, along with Women’s basketball in general. Can any of these nappy headed bitches even dunk? I bet I’d have a legitimate chance on beating any of them in HORSE and I haven’t played basketball since junior high. What a fucking joke.

RE the above: Welcome to Trump’s America — where cockroaches now feel emboldened to show their rotting carcasses in the light.

Yeah baby – the progressive movement is over.

Thanks for the insight , roach.

You spelled Gaucho wrong in the 5th paragraph

Perhaps those referred to are “Indians that serve as messengers” (guacho = definition).

I think you need to contact the author — as it is unclear from context alone.

Are you mental? The school’s mascot is the Gaucho…

Oh? Don’t say. Thanks for the penetrating glimpse into the obvious.

Proud of my alma mater. Thank you.

Yes siree Bob – an average 8th grade boys team would wipe them off the court.

How are them ‘Niners doing this year anyway?

I hope prospective employers are paying attention. Who wouldn’t want to hire a bitter, perpetually-aggrieved woman from UCSB?

So you wouldn’t hire someone because they inadvertently switched an A and a U? What industry are you in? I suppose as lawyers, typos are no good because they write a lot of letters and so forth, but they have paralegals who proofread them first. As an engineer or a chemist, perfect grammar is not that important. I’ll tell you for a fact, that in the accounting field, there are plenty of ESL people who may not write nice memos, but make a damn good living. You probably know this already. There are plenty of non-college grads in sales who… Read more »

university of california’s reverse racism entrance requirements (ucsb, ucsc, ucla, ucb….) hide this posting © craigslist – Map data © OpenStreetMap (google map) The suit includes examples of such tables using data from the 1994 entering classes of most of the University of California’s law and medical schools. Favish obtained the data from the publicly-funded schools after suing the Regents under California’s freedom of information law, the California Public Records Act. Based on the schools’ own data, the consumer protection suit reveals the following: UC Berkeley School of Law (Boalt Hall) offered admission to every black applicant with both a… Read more »

Interesting – circa 1994 or so, a black friend of mine in high school got into UCLA while I did not, although my GPA and SAT scores were higher than his. I asked him – how the hell did you get into UCLA and he said – probably because of affirmative action – jokingly, of course. Too bad we haven’t kept up contact after high school because I’m curious what he’s up to. In the end, I’m glad I went to UCSB instead of UCLA… best 4 years of my life.

You title it “ucsb is corrupt” but the letters UCSB do NOT appear (in that sequence) ANYWHERE among your data.

This is like saying “Alabama is corrupt” and then citing evidence of corruption from every state in the Union BUT Alabama.

Major disconnect between header and evidence. Hopefully you are not a UC graduate.