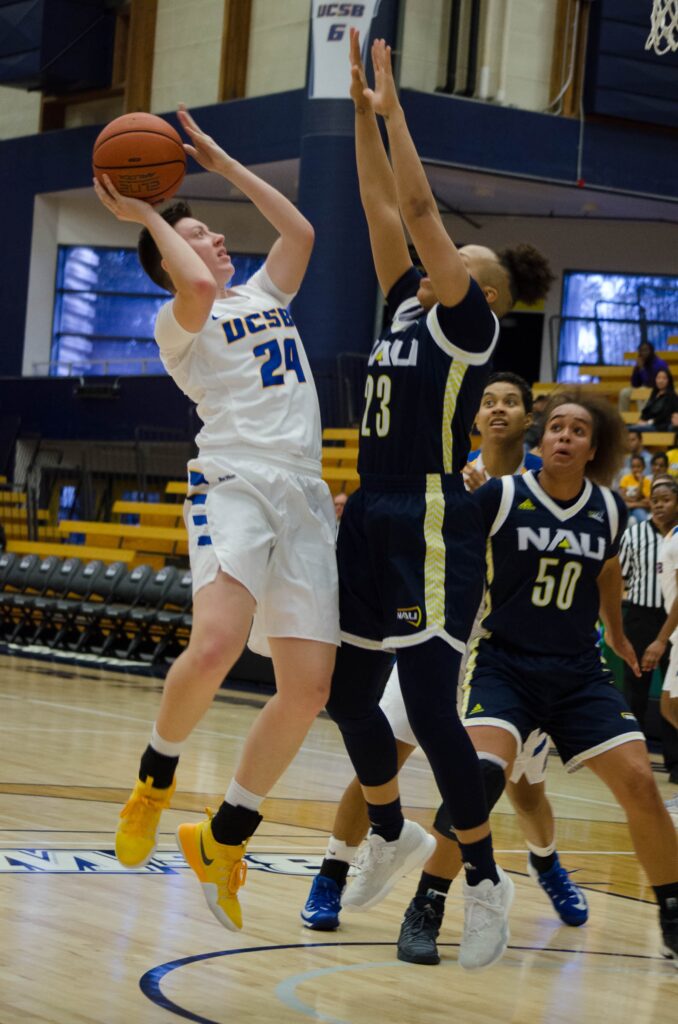 Taylor Farris jumps up to score a point for the Gauchos. Christina DeMarzo / Daily Nexus

Edelman capitalized on her size advantage down low, scoring a career-high 20 points on a 10-14 shooting effort along with four rebounds to help guide the Gauchos to their 60-51 defeat of Northern Arizona. UCSB outscored NAU 32-16 in points in the paint.

“Well my teammates are great about throwing me the ball,” Edelman said. “I can just get the deep seal and they pass it to me and it’s a wide open layup; I don’t even have to make a move or anything. They [NAU] weren’t double teaming me, [so] it was pretty easy to catch it down low, turn and score. Having the size advantage [helped too]. It’s different when it’s 6’4” against 6’4,” but when I’m playing against somebody who is four or five inches shorter than me, I for sure have a size advantage on them.”

Santa Barbara improved to 2-2 on the season in its return home. NAU, currently on a two-game losing streak, is now 2-2 as well.

UCSB made a season-high 12-of-14 free-throw attempts in the game. Its 85.7 free-throw percentage was more efficient than any of its free-throw performances from last season.

Most notably, the Gauchos held the Lumberjacks to their lowest point total through four games.

A hard fought battle between the two programs ensued as both shot 35 percent from the field in the first half.

The plan to get Edelman the ball was evident from the game’s first quarter as she established her dominance in the paint, scoring six points on 3-5 shooting.

After taking an 11-7 lead at the 6:15 mark of the game, UCSB was held scoreless until a made layup by junior forward Taylor Farris with 18 seconds remaining in the period. Farris gave the Gauchos stability during their lethargic start, concluding Sunday with eight points on a 4-6 shooting night and six rebounds.

“I just feel like I’m doing whatever the coach asks. If you want to play, you have to come out hard,” Farris said.

Prior to the score, NAU managed to overcome its four-point deficit with an 11-0 scoring run in the closing minutes of the first quarter.

NAU earned its largest lead of five points, up 16-11 as a result of a three-point make by redshirt junior forward Kenna McDavis. The Boise State transfer was responsible for two of the Lumberjacks’ total of four three-point makes, sinking 2-3 from deep to end the first half with 10 points.

Similar to UCSB, Northern Arizona experienced stagnancy on offense as McDavis’ basket would be NAU’s last field goal of the first quarter and the drought continued into the second. NAU went scoreless from the 2:04 mark in the first until McDavis scored its first points at the free-throw line.

Both teams continued to trade baskets, leading to a 25-25 tie at halftime.

Despite going 1-11 from behind the three-point line, coming out of an NAU timeout, the Gauchos gained a spark in the closing minutes of the third quarter.

UCSB’s penetration of the paint helped provide spacing on the perimeter as an assist from inside by Edelman to Porter for the three-pointer was made. NAU would go on to knot the score at 36-36 in responding with a long distance make by senior guard Taylor Leyva, who has six points and three rebounds.

Providing UCSB with a comfortable lead was a quick 7-1 run to close out the third. The Gauchos gained a 43-37 lead after sophomore guard Coco Miller’s only three-point make of the game.

During the fourth quarter, NAU pulled within a one-point deficit a total of four times, but was unable to regain the lead over UCSB.

Helping fend off the Lumberjacks, who trailed 47-46, was senior point guard Onome Jemerigbe in recording her first field goal of the game with 4:42 remaining in the game. She achieved a career-high in free-throw makes and attempts, missing just one as she went 9-10 at the line to register 11 points. Jemerigbe and Miller tied for the game-high in assists with five.

Despite five fouls limiting her to just 25 minutes, the redshirt sophomore made her first start of the season.

Scoring each of her field goals from beyond the arc, going 3-5, Porter knocked down a clutch three-pointer to push the Gauchos’ lead to 56-50.

Porter’s three-pointer was UCSB’s last field goal of the game as the Gauchos secured their victory at the free-throw line. Adding further security to the win was a steal by Miller on an inbound attempt by NAU, leading to Jemerigbe being fouled and ending the game with free-throws.

UCSB will be back on the road on Friday, Nov. 25 at the University of San Diego. It will face the Toreros at 5 p.m.