The Daily Nexus
Sign of the Times
Why You Should Vote if You’re Disenchanted with the Election
November 8, 2016 at 5:00 am by Kimia Hadidi 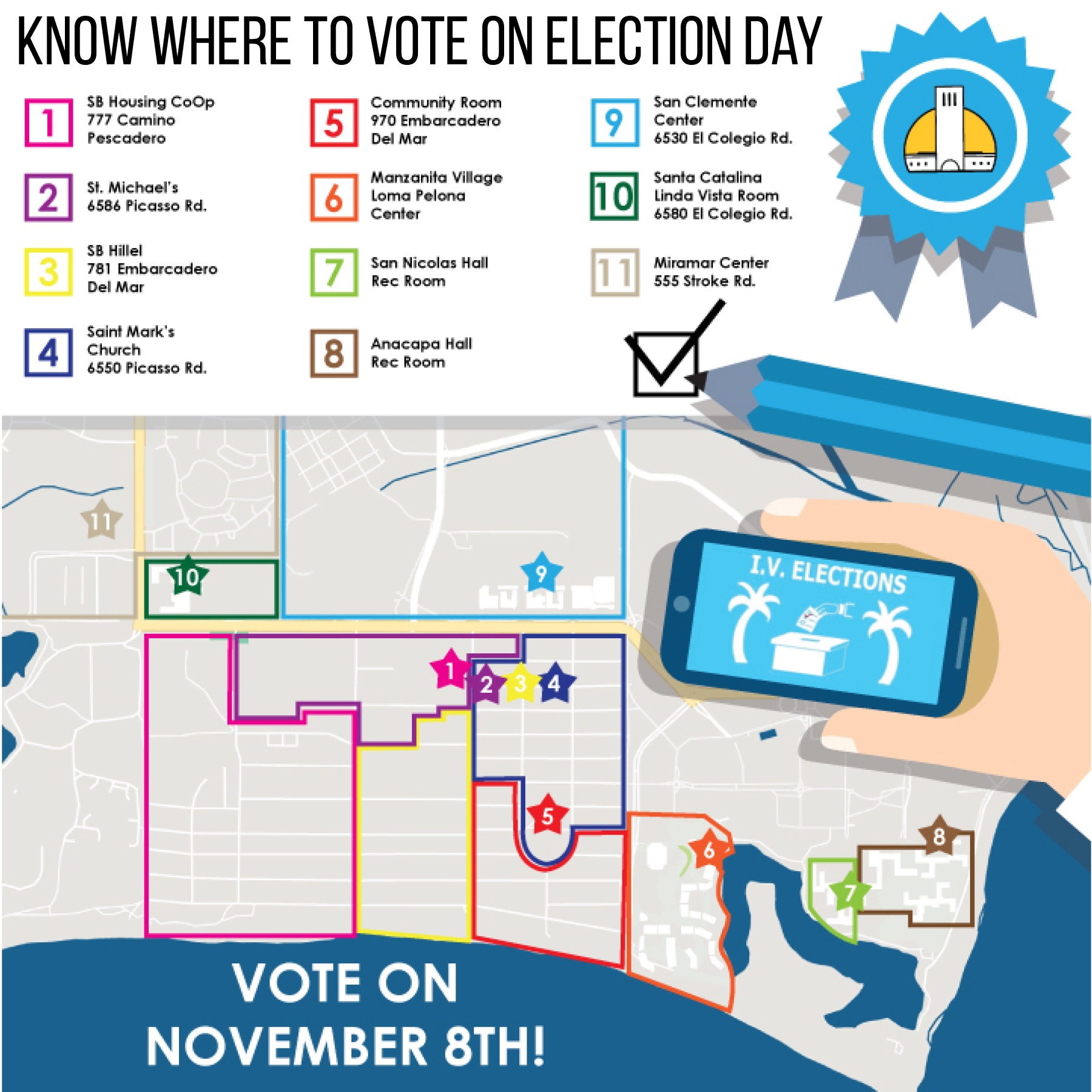 It’s a nightmare of American politics to see that for almost a year and a half, Donald Trump has dominated media with the continuous stream of garbage spewing from his mouth. He’s a businessman, and his business is scandal. Trump knows causing a scene, no matter how despicable, rotten or offensive, keeps him relevant. Either out of anger or repression, Trump supporters eat it up like gold. And I guess, if I look objectively, I can see why.

The suave nature of traditional politics has lost its appeal to the majority of voters. In the age of reality TV, social media and instant news, polished political statements just don’t cut it. The gridlock in Congress and lack of instantaneous action doesn’t inspire confidence in the system. People are fed up. It seemed as if the primary was just a surge of the subjugated device that led people to the two ideological extremes, Sanders and Trump. If our Congress is a microcosm of our country’s political polarization, however, then not only did that anger come out in full force, but it also created a mushroom cloud of an election.

Our primary showed liberal disenfranchisement with the sponsored Democratic party. The rise of Bernie Sanders and the overwhelming youth response in his favor represented a new age of political participation. The “fringe” candidate was suddenly the favorite candidate by those who felt Clinton had played the game for too long. Normally, levels of experience and years of reelection look good on a public resume. For Clinton, the scandal and levels of apprehension surrounding her name in addition to her public bandwagoning onto popular platforms left many liberals unimpressed.

On the opposite end of the spectrum, Trump’s support seemed to have come out of nowhere. His infallible ability to scream anything and everything negative about race, gender, religion and any other creed in-between can be linked to the unwillingness of people to support an establishment candidate. Those with strong ideological ties are more amped up, more likely to show solidarity at the polls and more likely to remain loyal through a multitude of campaign crises.

If our Congress is a microcosm of our country’s political polarization, however, then not only did that anger come out in full force, but it also created a mushroom cloud of an election.

The numerous reasons for this are quite fascinating. There are those who respect his candor and unfiltered language as a reason to trust him. There are those who would support anyone who runs against Clinton out of sheer hatred for her. And there are those who simply agree with someone as wild as Trump, as anti-establishment as anyone, fighting the Republican party from the inside and then turning it into HIS party, representing a new wave of Republican annexing.

It seems natural that disgust with the mainstream political parties would lead to a surge in voting for third-party candidates. But yet again, that is not the case. Those who reluctantly joined Hillary after Sanders’ primary loss do so out of fear of splitting the vote and losing to Trump, as seen with the slim loss of Al Gore in 2000 due to the split vote toward Nader and the massive failure in the Florida recount toward Bush. This goes for those who reluctantly join Trump.

Although the alternatives present in Jill Stein of the Green Party and Gary Johnson of the Libertarians seem promising, the idealistic avoidance of voting for the two-party system creates terror of losing to the other side, regardless of which side you’re on.

In my case, that’s my dilemma. I’ve read article after article on how Sanders could still win, on how the third-party candidates offer some hope, but I’ve basically accepted my electoral fate. The ever-so-slight positives to Clinton offer me much more than the disaster of repugnance that is Trump, and for that I am grateful. My own moping about how I have to cut my losses, I see this election as a jumping-off point for an incredible political future ahead.

So much disenfranchisement means reform is coming. It may be soon or distant, but the major parties will do whatever they can so that an election of such a disgraceful caliber will not happen again. Additionally, the popularity of the anti-establishment means those “fringe” ideas will be the future of the parties. For the Democratic Party, it means a step to the left. For the Republican, it means a reform of what it means to be a Republican.

The factionalism of the Republican Party was held by strands of glue, with true ideological libertarians, social conservatives, fiscal conservatives and so forth accepting the party with meek fervor and large allowances of difference. However, the party divides revealed in this election leave me wondering how the Republican Party can reclaim the presidency or even hold on to Congress when they can barely keep themselves operating.

I leave you with this: this election will end. The disruption and chaos in the election will not. The lasting impact of this election on politics will be analyzed for years to come. So vote lukewarmly. It’s acceptable, and expected, for this election cycle. However, keep in mind that the future will come.

The change that will result, either way, won’t come from whoever sits in the oval office. It will come from the people. In that sense, all this nonsense will have been for something. It has politically reignited a people once so apathetic and happily ignorant to hand elections to our elected officials. That is something that inspires my vote to mean something in an anarchic election of less-than-passionate loyalties. Now, candidates must work for it.

Kimia Hadidi hopes this election will lead us to a more involved future.