All-American striker Nick DePuy broke his five-game scoring duck in spectacular fashion Wednesday night, grabbing the golden goal in the first added period to give the Gauchos their third overtime win of the season against the Aggies. DePuy, whose five matches without scoring is the longest dry spell he’s had since moving to striker his sophomore year, bagged his sixth of the season to secure the 2-1 victory on the road. 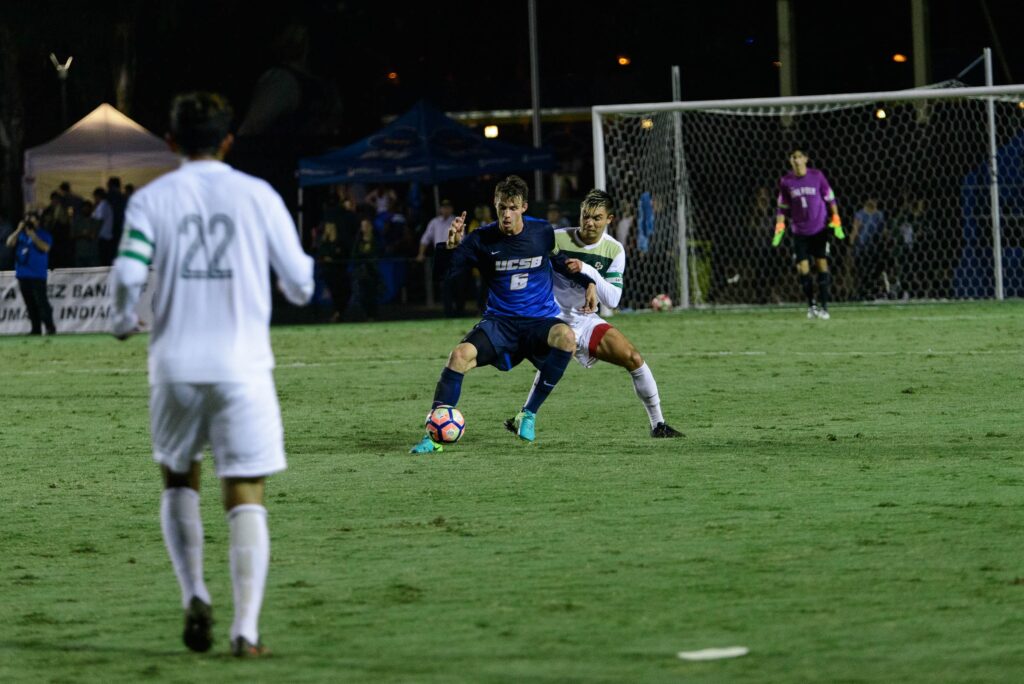 UCSB improved to 9-5-2 overall, 5-0-2 in Big West play to clinch a spot in the conference playoffs with the win while maintaining its unbeaten run in league as well as widening their lead in the North division, seven points clear of second place Sac State. UC Davis drops into third in the division and now sit at 7-7-2 overall and 3-4-0 in the conference.

Early on, the Aggies looked like the team that could possibly knock off the rolling Gauchos, outshooting the visitors 7-3 in the opening third of the match, including the first goal of the afternoon in the 7th minute when Kyle Higgins unlocked the affair. Davis dominated most of the first half and held firmly onto their lead going into the break as Santa Barbara was unable to create any real opportunities.

In the second half, though, UCSB’s feared offense was back to its normal self, creating a couple of close chances before junior forward Ahinga Selemani chipped a ball to the back post for junior midfielder Kevin Feucht, who headed the ball down for the equalizer, adding the tenth goal to his conference-leading tally. The German now also climbs to seventh in the national goal-scoring leaderboards.

Although Selemani’s four-game scoring streak snapped in the win, he still managed to come up with the same opportunistic play that has made him such a threat up front this season by winning the ball off a missed clearance and finally cracking open the airtight UCD defense.

After the leveling goal, both teams settled down and mostly waited for overtime, making several defensive substitutions and deciding against creating too many chances at the risk of conceding on the counter. In the extra period, though, the Gauchos brought on plenty of attacking force, and their forward efforts were rewarded almost immediately in the 92nd minute when DePuy finally got back on the score sheet.

Sophomore defender Dalton Pando sent a long ball in behind the Aggie defensive line, where DePuy brought it down, smoothly beating his man before firing home his sixth of the season to tie Selemani for second on the team. Funnily enough, the OT winner fulfilled team-leader Feucht’s prophecy when he guaranteed a goal from his struggling frontman in their next match following last Saturday’s win against Cal Poly.

The win continued the hot streak the Gauchos have been on since conference has begun, and the team now rides their seven-game unbeaten run — their longest in three seasons — into the home clash with Cal Poly on Saturday. UCSB will be hoping to win both legs of the Blue-Green rivalry as well as avenge the last-second goal the Mustangs scored to tie it up before holding onto the 2-2 result in overtime when they travelled to Harder last year.

That match will be played Saturday at 7 p.m. at Harder Stadium, with a chance to sell out the 17,000 seat stadium for the biggest rivalry in college soccer. The game will be televised on Fox Sports, and admission is free with an ACCESS card. Follow @thenexus_sports for all things Gaucho soccer.