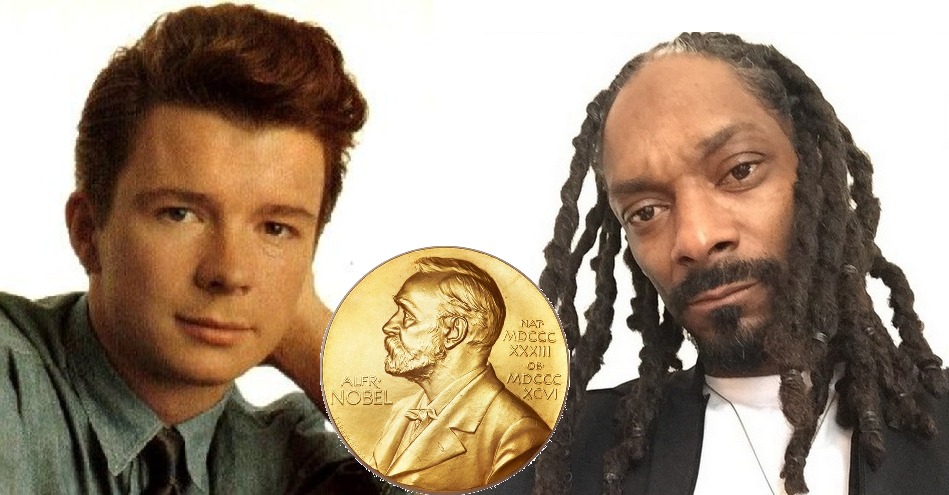 SANTA BARBARA, CA – In the wake of the Nobel Committee’s decision to award Bob Dylan the Nobel Prize in Literature, many are wondering when their favorite musician will receive a coveted Nobel. Fortunately, we have an anonymous source with ties to the Nobel Committee who has told us who will be selected as some of 2017’s Nobel Laureates.

According to our source, marijuana aficionado and rapper Snoop Dogg will be the recipient of the Nobel Peace Prize in 2017. When asked what the Committee’s reasoning was, our source said the following: “It should be obvious. Dogg consumes so much hash that he is the physical manifestation of peace. It’s like his motto is ‘chillax, cuz.’ Surely, his pot-smoking lifestyle has inspired many to ‘take it easy, cuz,’ and thus contribute to world peace.”

Further investigation asked about the possibilities of other Laurates, including the potential for Dr. Dre in the running for the Prize in physiology or medicine.

In addition to being an iconic rapper and champion of cannabis, Dogg has also recently gained attention for his observant commentaries on the documentary “Planet Earth.” He has made such insightful comments as “Look how dey standin’ up on dey toes, like ‘ey, cuz, we gotta get up outta here, cuz!” in reference to an encounter between a group of otters and a crocodile. Indeed, Dogg is a well-rounded individual, as he encourages peace through his laidback lifestyle and increases the public’s awareness of the majesty of nature.

Next to Dogg and the other unnamed Nobel Laureates of 2017 will stand an iconic musician of our age, Rick Astley. Astley’s initial popularity began with well-received hit single, “Never Gonna Give You Up,” in 1987. For your parents, this token of the ‘80s will be remembered as a song symbolizing what love should really be like. For us, Astley will forever be known for a bad internet prank from the early 2000’s.

“Honestly, Rick embodies the principles that are key to a healthy relationship,” said our source in regards to the literary significance of Astley’s profound writing. “The lyrics of his hit single tell us how to treat our partner, and his YouTube appearances remind us to give our true love fun surprises every now and then.”

Further investigation asked about the possibilities of other Laurates, including the potential for Dr. Dre in the running for the Prize in physiology or medicine. As of now, nothing has been confirmed outside of these two candidates.

Isaac Mikulski is a second year physics major who hopes his local mechanic will get the Nobel Prize in Physics.