Coming off a huge 2-1 win over rival Cal Poly at a rain-soaked Alex G. Spanos Stadium over the weekend, the UCSB men’s soccer team heads to the northern half of the state to face UC Davis. The Aggies are the only team the Gauchos have yet to face in conference play this season, and a win or a draw on the road would secure UCSB its seventh straight match without a loss in the Big West. 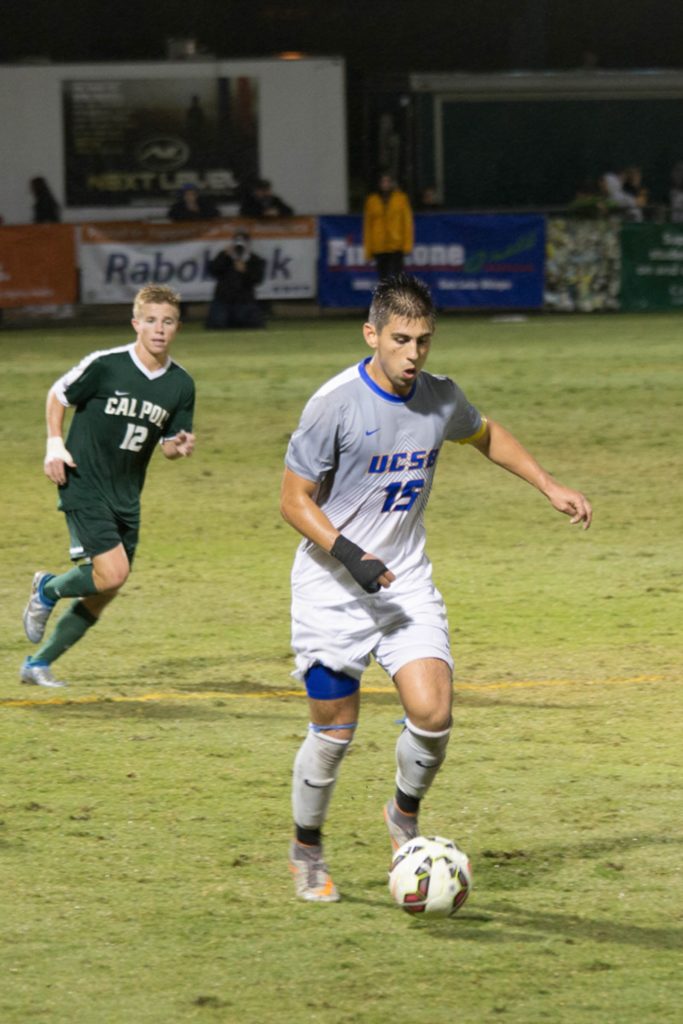 UCSB sits atop the Big West North division standings at 8-5-2 overall and 4-0-2 in conference play, currently the best record in the conference, just ahead of South Division leader UC Riverside, who sits at 4-4-1 in the Big West.

Davis will enter Wednesday’s matchup in second place of the North Standings at 7-6-2 overall, 3-3-0 in conference matches and will be hoping its home field advantage will help hand the thriving Gauchos their first loss in three weeks.

At the forefront of UCSB’s prominent play has been junior forward Ahinga Selemani. “Jings,” as his teammates call him, has been in the best form of his career in recent weeks, scoring in four consecutive matches including the equalizer at SLO shortly after his team fell down 1-0.

His performances haven’t gone unnoticed either, as the Michigan native earned his second straight Big West Offensive Player of the Week award and topped off the honor by being listed in College Soccer News’  Team of the Week on Monday.

UCSB will also be receiving a huge boost this week, as freshman standout Daniel Amo returns from a groin injury that’s kept him out for 11 games. He is expecting to ease into the lineup with a cameo in this week’s games. In his six appearances at the start of the year, the versatile center midfielder scored twice and assisted twice and seemed to be linking up perfectly with his teammates.

“I’m pretty close, and probably gonna get a few minutes, but I have to get into it for a couple weeks to make sure I’m match fit in time for the [Big West] Tournament,” Amo said.

The Gauchos enter the UC Davis clash as the top offense in the conference by quite a large margin. Their 27 team goals on the season total at least three more than any other team. Santa Barbara also features three players in the Big West’s top-5 for goals — junior midfielder Kevin Feucht (9), Selemani (6) and All-American striker Nick DePuy (5) — as well as the second assists leader in Josue España (7).

At the other end of the field, though, defensive struggles plagued the team as it went on a five-game losing streak. Thankfully for UCSB, freshman keeper Titouan Le Roux has come into his own through the Big West season thus far, including a couple crucial stops in last weekend’s Blue-Green rivalry victory over the Mustangs. The first-year Frenchman has played every minute in goal for the Gauchos this year and has been key in the recent defensive improvements.

Great goalkeeping paired with defensive reorganization by Head Coach Tim Vom Steeg has seemingly fixed their issues with conceding chances on mental lapses suffered in the middle portion of the season. After six games in a row of allowing two or more goals, the back has tightened up noticeably, allowing just four in the last five matches. This includes a clean sheet at home against Irvine, which bodes well with only four regular season games left.

“We’ve already played against teams like Akron and UCLA, one of these teams will make the Final Four,” Feucht said. “We just have to keep working and improving so we can get to a place to showcase our skills with the best teams.”

The Aggies will pose a stern test for the Gauchos, as their wall of a back line has allowed a Big West-best 1.10 goals per game.

Offensively, Davis is led by sophomore striker Kristian Heptner, whose five goals and 11 points are both team highs. The Davis squad is the only team other than the Gauchos in the conference to attempt over 200 shots on goal this year, so the meeting will more than likely be a wide open affair.

The match will be played on Wednesday, Oct. 19 at UC Davis at 3 p.m. An audio stream of the game is available on the schedule page of the men’s soccer team’s ucsbgauchos.com website. Follow @thenexus_sports for all things Gauchos.