On Saturday night, the Big West North-leading UCSB men’s soccer team traveled just up the road for the away leg of the Blue-Green rivalry at Cal Poly. The host jumped out to an early lead in front of the sellout crowd of 11,000 fans at Spanos Stadium but the visiting Gauchos weathered the rainy conditions for the comeback win through junior forward Ahinga Selemani’s first-half equalizer and junior midfielder Kevin Feucht’s game-winning penalty in the second half. 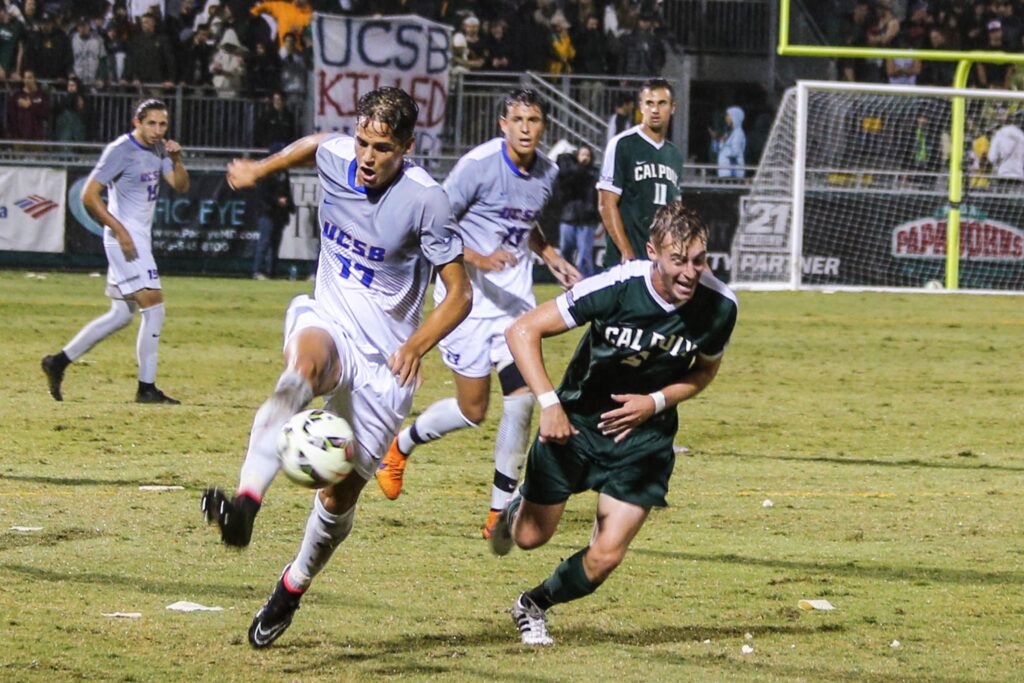 With the win, the Gauchos’ unbeaten run in conference play extends to six games as the team holds an 8-5-2 overall record and owns the best record in the Big West Conference at 4-0-2. The Mustangs’ loss drops them to 3-8-2 and a conference-worst 1-4-1 record.

“We always knew it was going to be a tough game, but we all wanted to come out in front of the crowd of 11,000 and show our best,” Feucht said. “Cal Poly played really well, too, so I’m proud of my team for coming back and getting the first and then the second goal.”

The newcomer rose to the occasion in his first appearance in the Gaucho-Mustang history, picking up a pass in the midfield and striking from just outside the box after a nice dribbling run to light up the SLO crowd.

The celebrations didn’t last long, however. Equalizing the score just three minutes later was Selemani on UCSB’s end. The forward picked up the ball in the Mustang 18-yard box when the ball bounced to him following a botched clearance by a group of defenders, and he was there to pounce to extend his scoring run.

The Ann Arbor native continued his impressive run of form, finding the net for the fourth-straight match; he now ranks fourth in the Big West in goals with six. Selemani is just three goals behind leader Feucht, the Gauchos’ match winner on the night. The difference maker was his ninth of the year, and he is likely enough to fight his way back into the top 10 scorers in the nation.

“Last year, it was just Nick [DePuy] who scored all the goals, but teams adjusted to it,” Feucht said. “This year, there are five or six guys who you have to stop that can score goals.”

The midfielder also commented on his teammate DePuy’s recent play, as he was last year’s highest scorer in the country but has had a run of games without a goal, including shots that hit the post in the last two runouts.

“Right now Nick is unlucky, but I promise he’s going to get one in the next game,” Feucht jokingly said.

After a dry spell in an extremely physical match, Feucht was fouled when receiving the quick return ball from junior defender Dalton Pando, and the German midfielder got up quickly to take his well-earned penalty following the long run from deep in the midfield. He finished the spot kick coolly, sending the keeper the other way before running to the corner for his signature backflip in front of the disappointed Poly crowd.

The game was a battle to the end on the wet field, with a total of 29 fouls in the match, the Gauchos with one more at 15-14. The teams were similarly even in the shots category, too, SB outshooting the home team 11-10, but the Mustangs managed 5 on target to the visitors’ 3.

The Cal Poly attack definitely tested the in-form UCSB side, as the Gauchos called upon freshman keeper Titouan Le Roux to make four saves. The Frenchman was up to the task, making a couple of crucial stops as his heroics helped his side hold onto the tough 2-1 road victory.

Next up the Gauchos head to UC Davis, who is looking strong at second in the division standings at 3-3-0 in Big West play. The Aggies are the only team on Santa Barbara’s conference schedule it has yet to face. The match will be played Wednesday, Oct. 19 at UC Davis at 3 p.m.