The Daily Nexus
Sign of the Times
Donald Trump and the Power of Fear
October 3, 2016 at 5:00 am by Neda Mazdisnian 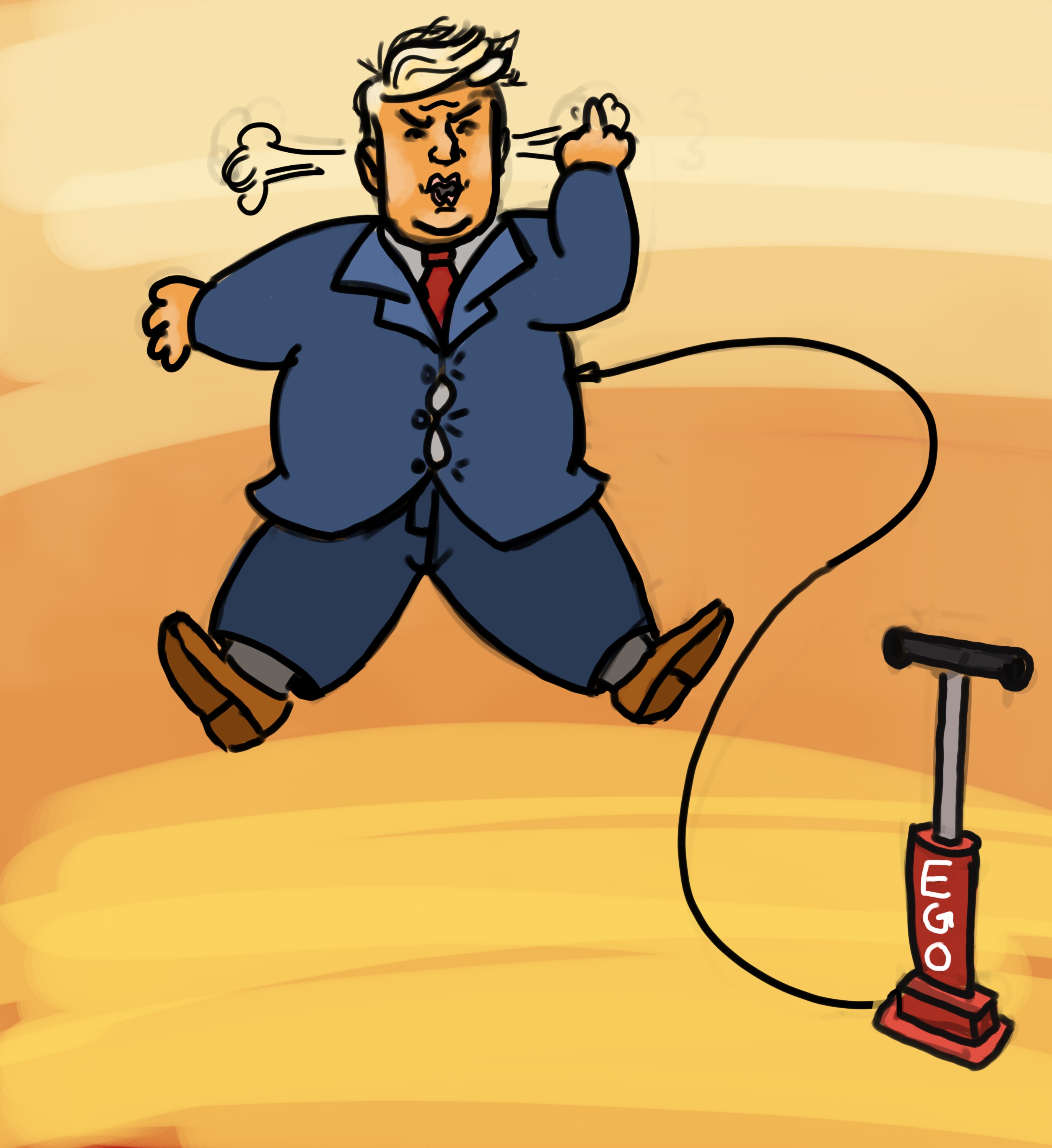 Donald J. Trump. A man severely bloated by his inflated (like worse than the Great Inflation) ego, pouty fish-like expression and puffy cloud-like hair. Ladies and gentlemen, it’s time to pop that ego, un-pucker that fishy expression and finally (finally) let that cloud-like hair blow away.

Some U.S. citizens seem truly enamored by Trump’s lack of (social, political, just about every other type of) etiquette, his unrefined, sandpapered personality and his extremely limited (basically nonexistent) political experience. Anything negative he says or does is simply seen as a joke and anything positive might as well be the Holy Grail.

The media is just as hooked as everyone else. The TV runs a story on Trump about every 20 minutes or so, sometimes even taking up a whole news cycle. I wonder if they’ll cover his hygienic habits too; I mean they’ve already covered his dietary ones so why not? It’s like the rest of the world doesn’t exist (much less Hillary Clinton).

Trump is like a drug people can’t quite kick to the curb yet, but I urge everyone to sober up.

Much more pressing issues such as mass shootings and acts of terror continue to happen every week, yet these real world problems are getting pushed to the side in order to talk about Donald Trump’s hair and the size of his hands. The fascination, bordering on obsession with this man, is getting old real quick. Trump is like a drug people can’t quite kick to the curb yet, but I urge everyone to sober up.

We’re less than two months away from electing one of these two candidates (in case you didn’t know, Hillary Clinton is running as well!) to the most powerful office in the world. One, a qualified politician and an experienced insider while the other, an egotistical demagogue and “a self-made man” (don’t worry Donald, daddy’s small million dollar loan won’t be taken into consideration).

So, why is there such an obsession with Trump? Why such a fascination? Why so much admiration? What makes one politically unqualified man (yes, just a man, not a God) able to so closely rival one of the most qualified candidates in history? They’re practically tied at the polls and the election outcome is up in the air. Why are so many political analysts taking his side? Why does the professor (who’s predicted the last 30 years of presidential elections correctly) believe that Trump is going to win?

Somehow (I don’t know how to be honest) there’s a method to Trump’s madness. He uses the power of fear as a means to undermine the political institutions we’ve built this nation upon. He places doubt and insecurity into the minds and hearts of the American people with simple-minded comments that people view as “honest.” If he’s so honest, why doesn’t he release his tax returns? He uses the conflicts abroad and at home to poke holes in this country’s greatness and puts himself on the forefront of “making America great again.”

He sees America as weak, with a military and government that has limited capabilities and limited success. He highlights the U.S.’ past domestic and international failures, but never admits to all their successes, ones that far outweigh any failures. It just takes one voice for people to listen, and so the seed of doubt regarding U.S. political insiders and institutions is growing larger and larger every day.

So here’s another voice. One I hope won’t go unnoticed; one that won’t drown in Trump’s sea of negativity. America doesn’t need to be fixed. It doesn’t need to be cured. And Donald J. Trump sure as hell can’t make this nation “great again” because it’s already great. It’s a nation for the free and for the hardworking. A nation full of promise and hope where people thrive and yes, sometimes struggle, but in that struggle we learn to be better and do better.

Our nation isn’t perfect. It’s not without problems, but it’s pretty damn great already. We can always improve and evolve as a nation and as a people, but that’s a natural cycle that’ll run its own course in due time.