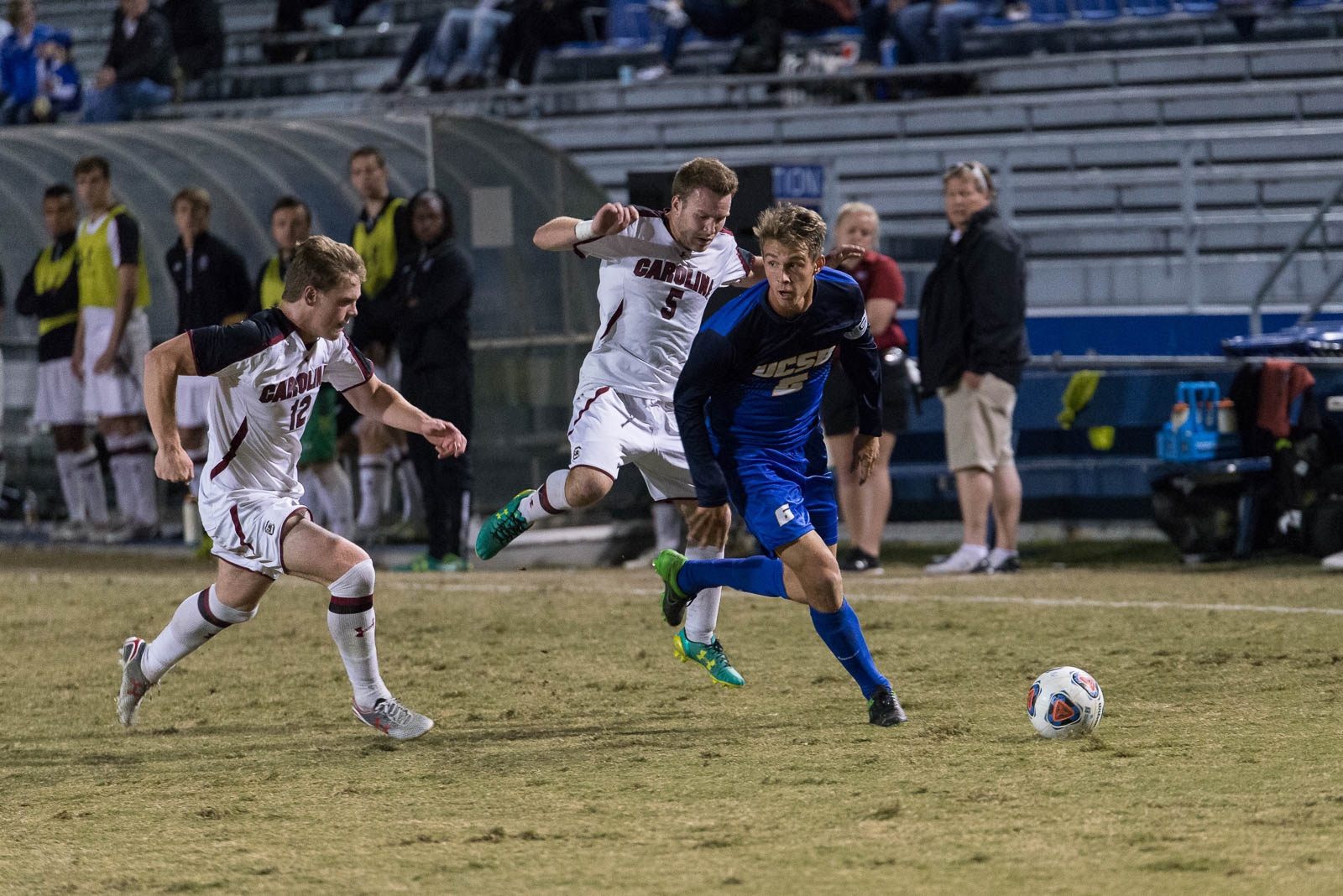 On Saturday, the No. 25 Gauchos lost 3-2 to the visiting Golden Bears, who tied the game with a last-minute goal before going on to grab the golden goal in extra time. The heartbreaking loss was the latest in what was a tough three-game home stand for UCSB, who lost all three matches on last-gasp goals, two in overtime.

The Cal defeat drops Santa Barbara to 4-5-0 on the season and they will almost certainly drop out of the Coaches’ Poll rankings this upcoming week. The win improves the unranked Bears to 4-2-1.

UCSB junior midfielder Kevin Feucht opened the scoring in the 60th minute with senior Andy Perez’s cross to the back post was hit home with a towering header as the 5800—largest crowd of the season at Harder—fans in attendance erupted in celebration of the 1-0 lead after a scoreless first half. The goal was the German’s sixth of the year, a team-high and tied for the 15th highest individual tally in the nation, to go with two assists.

Unfortunately for the Gauchos, the defensive woes from the previous four matches continued, as four minutes later freshman goalkeeper Titouan Le Roux punched out a cross to a wide open Jose Carerra-Garcia just beyond the penalty spot, who smashed in the second chance to equalize for the Bears.

Again, like in the last couple losses, UCSB remained the team driving forward and pressing on for a goal, and their efforts were rewarded in the 78th minute from their umpteenth cross of the game. Substitute winger Dalton Pando found space on the left and lobbed it up to the far post, where the 6’5” striker Nick DePuy rose above the defenders to head in his fourth goal of the season.

Yet another defensive lapse would cost the Gauchos’ their lead, though, when Le Roux’s short pass to a defender went behind its target and Cal intercepted, firing a quick pass through a hole in the middle and midfielder Nick Lima finished it off to equalize at two apiece. This was the third match in a row that the Gauchos allowed a game-tying or game-winning goal in the last five minutes of regulation, and their inability to close out the win cost them again in overtime.

In extra time, Cal had far more energy, UCSB likely drained from conceding another crucial goal at the end of the first ninety minutes. The Golden Bears found plenty of space down the wing, then sent a ball across the six-yard box to Christian Thierjung, who tapped in the cutback pass with a tidy one-time finish.

Santa Barbara was outshot 21-16, but kept the Bears under wraps for the first sixty minutes thanks to nine saves from Le Roux. Despite a career-high number of stops from the Frenchman, the Gauchos gave up three goals for the second straight match and for the third time during the losing streak.

UCSB’s slide comes at a suboptimal time, with the Big West Conference season beginning Thursday with a trip to UC Riverside, but UCSB will be confident going into the league opener knowing they were able to finish last year 7-2-1, including a 2-0 home win versus the Highlanders.

The Riverside match will be played Thursday at the UCR Soccer Stadium at 7 p.m. An audio stream will be available on the schedule page of the men’s soccer UCSBgauchos.com website and the game. Follow @dailynexus_sports on Twitter for live tweets on all things UCSB sports.