In one of the most highly anticipated matches of the year thus far – that between the No. 13 UCSB men’s soccer team and the No. 7 UCLA Bruins – the Gauchos jumped out to an early lead and defended masterfully in the second half, holding on to their 1-0 advantage. UCLA, though, seized the chance on an opportune foul call with just seconds left in the game, beating freshman keeper Titouan Le Roux on the ensuing free kick to force overtime. 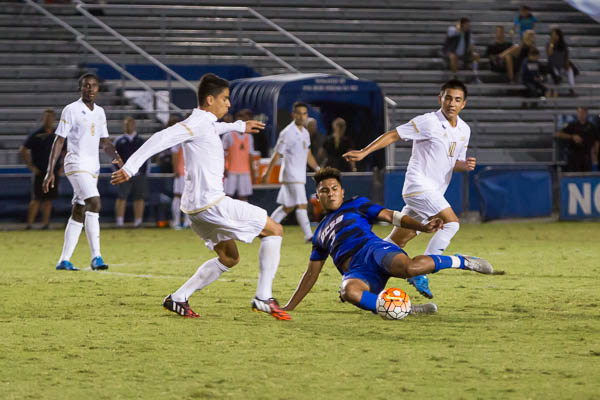 With his opponent fast approaching, Randy Mendoza slides to get the ball. Dustin Harris/Daily Nexus

In the added period, Santa Barbara’s players looked physically and mentally drained after the first 90, and the Bruins found a hole in the Gaucho defense when junior striker Abu Danladi found sophomore midfielder Jackson Yueill with a classy through ball which went across goal to the bottom right corner for the golden goal.

The loss is the Gauchos’ third straight against ranked opponents, the other two at the Akron Tournament versus the hosts and Butler, and they now sit at 4-3-0. As for UCLA, the team has been climbing up the national rankings for two weeks in a row and is now 4-1-1.

With 4,100 fans in attendance and the student section packed full, Harder Stadium came to life in the 14th minute when freshman forward Noah Billingsley held the ball up top until a charging junior Kevin Feucht ran through the midfield and his striker sent him through on goal. He finished the chance with no issues and ran to the corner to do his signature backflip in front of the Gaucho faithful.

Feucht has been an engine all season, helping in the back and striding forward to score a team-high four goals as a staple box-to-box midfielder for Santa Barbara. Against UCLA, he got back on the score sheet after three games since his two against San Diego, but he was even more crucial in the second half as the team absorbed waves of Bruin attacks for the better part of the final thirty minutes.

“The Gauchos played really well tonight. I think we did all the right things and hard fought, and I’d say it’s one of our better games in terms of how hard the team played to win this game,” Head Coach Tim Vom Steeg said of his side’s performance.

After grabbing the goal it needed to take control of the game, UCSB held its 4-4-2 air tight, mostly keeping UCLA out of the attacking third while countering quickly through the wings, and even when the Bruins managed to find themselves space for a chance, a blue defender was there to respond including Le Roux and freshman midfielder Daniel Amo.

Amo, who was filling in at center-back for the suspended sophomore Sam Strong, was possibly the Gauchos’ best player in the second half, winning the ball time and time again with a pair of crucial slide tackles around his own box and setting the attack on its way just as well.

“I prefer to have a left-footed center-back, so I picked Daniel by sort of necessity, and I was really surprised with how well he played, honestly.” Vom Steeg said.

“We only had him in practice one day, but he felt very comfortable back there. He’s really strong on the ball technically, but I also thought he defended very well tonight.”

At the last moment in the game, though, the Gauchos’ admirable 90 minutes of play were undone when a foul was given up right outside the penalty box, giving the Bruins one last chance before the final whistle.

The call was met with plenty of controversy from the Santa Barbara coaching staff and players, as the Gaucho called for the foul wasn’t given a yellow card, which is the only time the clock should be stopped. The referee called for the clock to be paused, though, giving the Bruins five vital seconds for their free kick.

“Coaches make mistakes, players make mistakes and referees make mistakes. That’s just the nature of the game,” Vom Steeg said of the call. “I didn’t accept the reasoning for them stopping the clock except for the obvious reason, which is to give [UCLA] another chance, because, in the laws of the game, you only stop the clock to give a card.”

The Bruins then took the chance cleverly, taking an early free kick before Le Roux and the Gauchos were completely set up, and caught the French goalkeeper out with a shot that skimmed off the bottom of the crossbar on its way in to tie the game at one apiece and force the extra period.

In overtime, Yueill’s finish off the Danladi through ball sealed the shocking late comeback for UCLA as the sophomore midfielder grabbed his first goal of the year to go along with five assists.

This heartbreaking loss is the first home defeat the Gauchos have suffered this year, but they still have two more home matches in the next week to look forward to as a chance to bounce back from their current dip in form. Next up UCSB will host LMU on Wednesday at 7:05 p.m. which will take place at Harder Stadium.