The Daily Nexus
Sports
No. 7 Gauchos Swept at Annual Akron Tournament
September 14, 2016 at 5:00 am by Ryan Burns 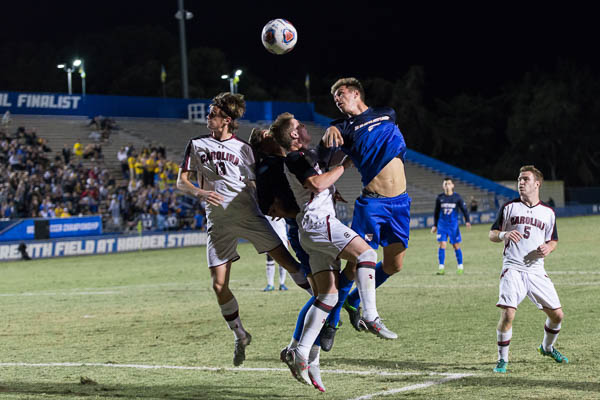 Three days after their tough 4-2 loss against No. 19 Butler, the UCSB men’s soccer team dropped their second straight against No. 10 Akron in the final match of the Zips’ annual tournament 2-0.

After starting the season on a four-game winning streak, No. 7 Santa Barbara lost both of their matches in the Akron Tournament, and now sit at 4-2-0. The shutout win lifted the hosts to the same record.

The Zips took the lead on their first chance of the game through senior midfielder Adam Najem in the 11th minute. UCSB then had a man sent off when sophomore defender Sam Strong received his second yellow of the night in the 75th. Redshirt sophomore forward Ezana Kahsay’s goal sealed the victory for Akron seven minutes later.

For the first 10 minutes of the match, the Gauchos were in complete control, with almost all of the possession and earning a few dangerous free kicks and corners as well as creating a good chance for freshman midfielder Daniel Amo in the third minute, but he sent the chance over the crossbar.

Then on a quick counterattack through the middle, Akron broke the game open when Najem picked the ball upvoff a Santa Barbara defender’s block, spun around his man and fired a shot into the top right corner to beat freshman goalkeeper Titouan Le Roux at his far post. Le Roux put in another solid performance, making five saves including a penalty stop and an impressive double save before Akron’s second goal.

After the goal, both teams traded blows for the rest of the match in a physical encounter, earning UCSB 16 fouls to the Zips’ 22. Both teams had plenty of chances, each managing 11 shots, but the Gauchos placed just one on target to Akron’s seven.

In the 31st minute, the referee showed a Santa Barabra assistant coach a yellow card for arguing for a penalty after a no-call for one of the Zips’ center backs’ potential hand ball on a block.

That was the first of five yellow cards shown to UCSB on the night, to go with Strong’s red card in the highly contested match.

Two of the visitors’ best chances came in the last 10 minutes of the second half as the Gauchos’ All-American senior striker Nick Depuy sent a header just over the top-left corner and then had a decent shot blocked by the Akron keeper, proving him unable to level the game before the half. Depuy tied with Amo for a team-high four shots, but neither of the early season standouts were able to continue their goalscoring in the team’s first scoreless outing of the season.

In the second half, the back and forth continued in what was likely the fastest game the Gauchos have played all year, but after the red card, head coach Tim Vom Steeg subbed off junior winger Ahinga Selemani to pull a man out of the attack and back into the midfield. UCSB, however, wasn’t able to create a shot after that under the press of the Akron attack.

The final blow was dealt in the 82nd minute when the Zips’ deflected shot fell right in the path of Eritrean forward Ezana Kahsay, who slotted past Le Roux to kill off the fixture.

The Gauchos’ next challenge will be their third straight match against a ranked opponent when they host No. 7 UCLA, their first home game against a top-25 side this year. The match will be played Friday at Harder Stadium, with kickoff scheduled for 7:05 p.m.