The current noise ordinance restricts “any loud and unreasonable noise” after midnight on Friday and Saturday, and students from UC Santa Barbara and Santa Barbara City College who live in I.V. have long butted heads with its strict enforcement.

The IVFP proposed last week that quiet hours would be shifted to 10 p.m. on weekends and received immediate criticism from dozens of residents. After hearing over two hours of public comment at student-lead town hall Tuesday, the IVFP decided to delay the final approval from Sep. 13 to a later date that is yet to be determined. 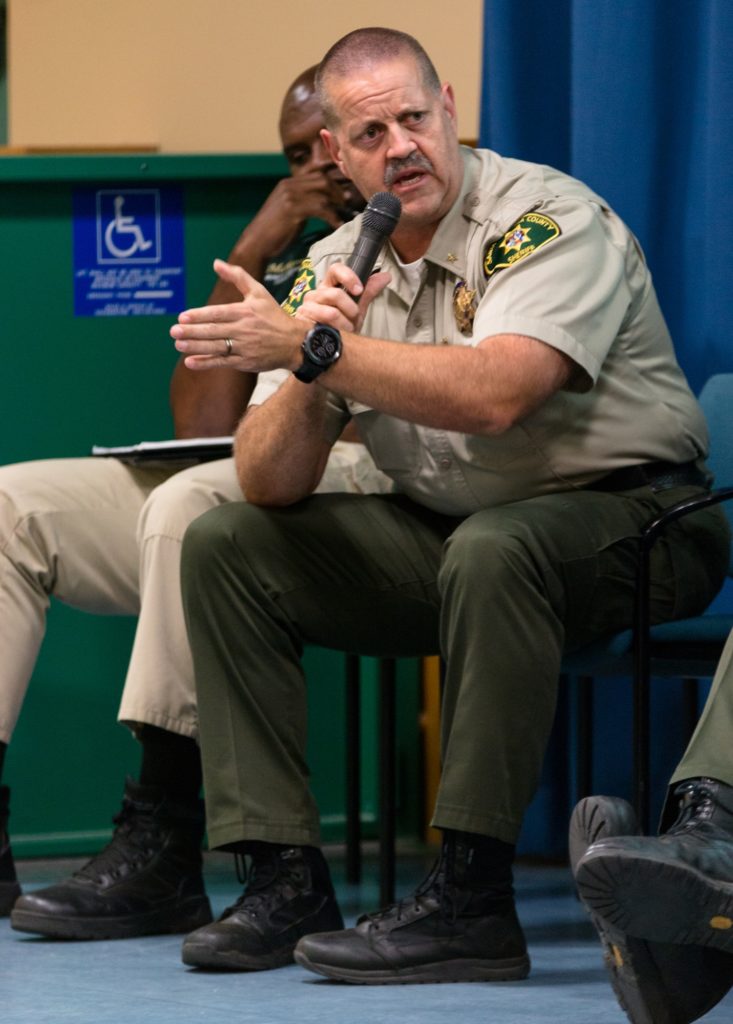 Commander of South County Operations Division, Kelly Moore, stating that the noise ordinance’s purpose is to minimize the amount of crime that occurs between the hours of 10PM and 12AM on Friday and Saturday nights. Stephen Manga / Daily Nexus

The Santa Barbara County Board of Supervisors is implementing the change throughout the county to align unincorporated areas with their surrounding cities, which already abide by a 10 p.m. weekend ordinance. Isla Vistans, however, insist that the town requires a specifically tailored approach.

The ordinance would affect all unincorporated areas in Santa Barbara county, including I.V., Hope Ranch, Montecito and the “Noleta” area between Goleta and Santa Barbara.

IVFP Lieutenant Ruben Cintron presented the change on August 11 at a monthly public meeting. But on Tuesday, Sirapat Cupradinan, a fourth-year chemistry major, claimed “most of us in this room did not hear about this until less than 48 hours ago.” 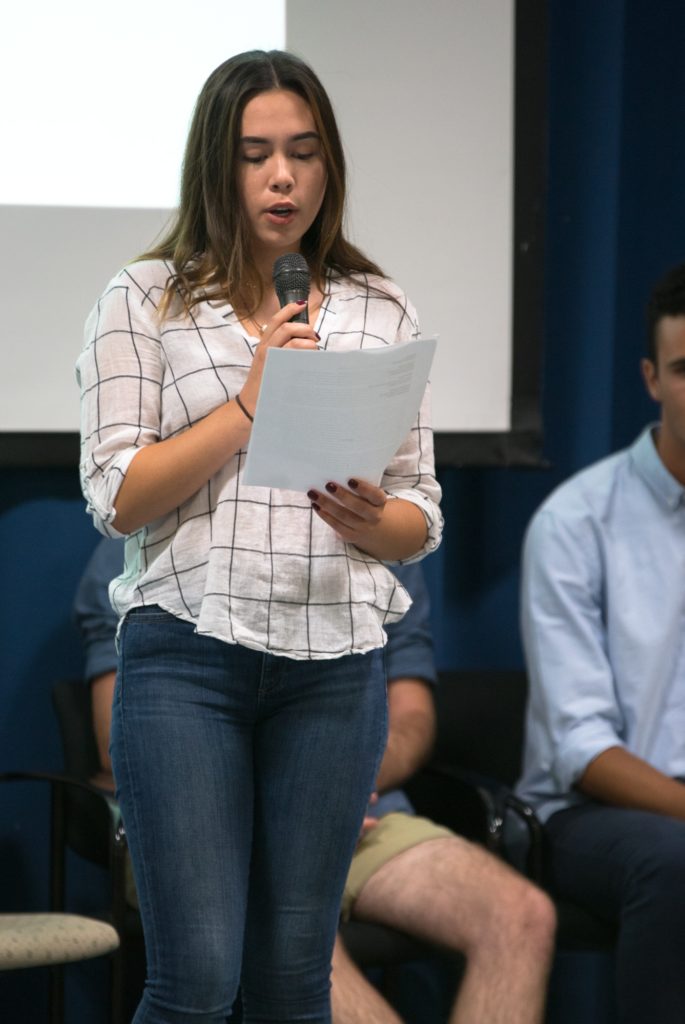 Kristen Armellini, Deputy Chief of Staff for the External Vice President of Local Affairs, reads comments from the EVPLA who disapproved of the ordinance. Stephen Manga / Daily Nexus

His sentiment echoed several other speakers; this was not the first time that locals have felt blindsided by important changes in I.V. In early June, parents and students gathered at a public town hall hosted by the university to speak out against construction at the intersection of El Colegio Road and Storke Road.

“We were just as surprised as everyone else that nobody knew about this,” responded Kelly Moore, a commander of the Santa Barbara County Sheriff’s Office. He attributed the late notice to personnel changes, saying he and Cintron were newly assigned to the case.

Supporting the new ordinance, he claimed it would increase safety in the town by targeting “what happens as a result of parties.” Crime continues in the summer when UCSB and SBCC students are not present, he said, and sexual assaults are a recurring problem.

Dwayne Moseby, UCIV liaison for the A.S. Public Safety Commission, countered that there has been a 20 percent decrease in crime from 2013 to 2015, citing an April report from the county district attorney office. He said I.V. experienced record-low crime rates on days “alternative programs” like UCIV were active.

“By having this new ordinance, it’s almost hindering, or say, a slap to the face, for these programs which have been developing the whole time,” he said. 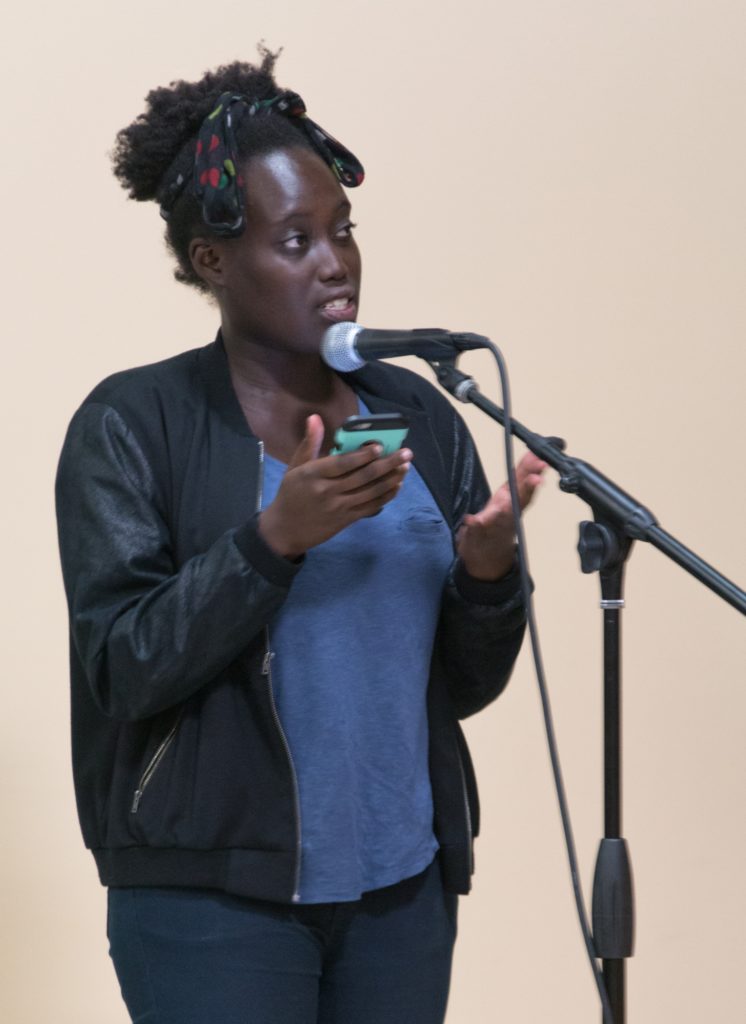 Student Advocate General Josephine Ampaw voices her concerns about the small portion of students who could attend the meeting during Summer Session. Stephen Manga / Daily Nexus

Several locals are also concerned that the change will hurt I.V. businesses that cater to a late-night crowd. Miguel Aceves and Sara Cho, who work at I.V. Deli Mart, say the business will suffer if students begin ending their nights early. The grocery store and fast-food joint closes at 3 a.m. during the school year, and Cho says “rush hour” begins around 12:20 a.m. every night.

The IVFP has not looked into the ordinance’s effect on local businesses, but Moore said “economics takes second hand to safety” when considering how laws will interact with residents over an extended period of time.

A burgeoning self-governance movement in I.V. hopes to close the gap between Isla Vistans and law enforcement. Darcel Elliott, campaign manager for the Yes on E & F self-governance campaign, says similar miscommunications have “happened continuously” in her time in I.V. and the Community Services District (CSD) could increase regular communication.

The “disturbing the peace” law in California allows the IVFP to shut down loud parties only after receiving a police report from another resident. If quiet hours have begun, however, they can put an end to any gathering that is producing noise 100 feet from its property line.

“We’re not saying don’t party,” Moore said. “We’re just asking you to do it quietly.”

The ordinance, if passed, has the potential to change music, nightlife and college culture in I.V., but not all residents are convinced that the law is a pressing issue.

UCSB student Jordan Mitchell said many of the “entitled-ass” audience members were worrying about their nightlife rather than what he considers more pressing issues, such as the death of a student last year or “racism that’s been happening on campus.”

“There a lot of things that need to be changed,” he said. “Y’all now decide to get together?”

Memo to SJWs: the vast majority of “racism” at UCSB is imagined by a group that believes it’s not getting what it thinks it’s “entitled” to.

Jordan Mitchell’s comment is hilarious. Andy’s story is sad, but he died because of synthetic drugs that he thought was acid. Not the cops or anyone else’s but him and the guys who sold and manufactured those drugs. The SJWs on campus have such a victim hood complex it’s perplexing.

Mitchell loooooves calling people out. Of course we’re concerned. It’s something that directly affects us and will definitely make everything worse. Jesus fucking Christ

It’s funny how Jordan Mitchell received the most complaints about playing his music too loud in our dorm last year, and he is now fighting against it? How heroic!

Jordan, maybe instead of insulting your fellow students you should take a look at yourself. Maybe no one cares about this supposed “racism that’s been happening on campus” because it’s illusory – or if it isn’t, then you certainly have difficulty citing specific examples of it. I can wager that I, as a libertarian/conservative student, got far more unwarranted hatred during my time at UCSB than I’ve seen most minority students receive, most of it from the same snobs who talk about “tolerance” and “inclusion.”

You used to be entertaining and amusing its sad you have turned to angry and bitter. Your points were better served by your previous approavch

IVFP officers are currently drafting the new ordinance to be presented at the next meeting. It has not been published online yet. You can also contact me at syelimeli@dailynexus.com.

So when is this meeting going to be?

…right in the middle of finals week?

Do these people never ever give up or what?

Where can I voice my support to this law? I live behind the fraternity. I once need to study for my midterm that is half my grade through a loud party and it was terrible. How can I support the early ordinance hour? T-T

What did you expect when you signed a lease to live near a fraternity house? And have you ever heard of the library?

Don’t support a stupid law because you don’t want to live with the consequences of your poor housing decisions. That’s quite selfish in my opinion.

?? to the response. You want quiet, you don’t live next to a fraternity house. It’s that simple.