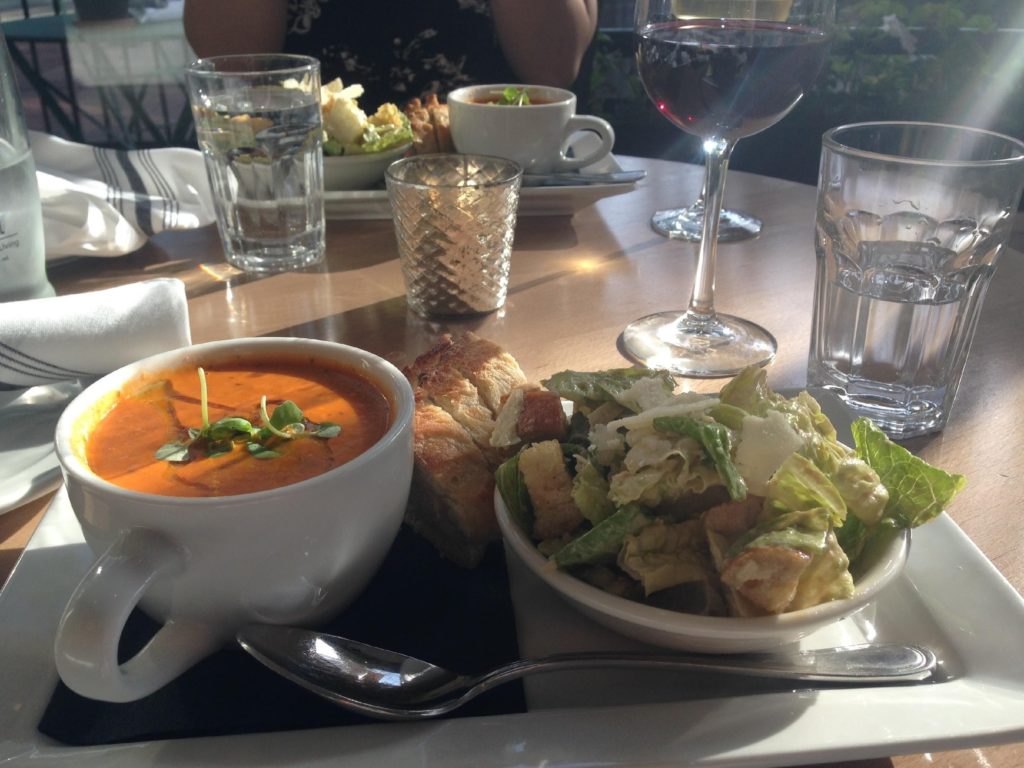 As a transfer student, something I learned throughout my first year here was that Santa Barbara has a lot of great places to explore. This is especially true in regards to food, as State Street is lined with restaurants of every kind of food. On one of my first trips downtown during the fall, my housemate and I saw a new restaurant called Caffe Primo was going to open soon. We were both immediately interested in going once it opened. It appealed to us based on its appearance alone, with twinkling, hanging lights outside and cute décor we could see through the windows. It opened around the holidays this past year, and while it took me a while with my busy schedule to get there, I finally made it last weekend.

My housemate and I made our way downtown. We planned on going to Caffe Primo for a late lunch and we were both starving. Let’s just say we faced some unfortunate circumstances before we were finally able to sit down for our meal. We arrived at the restaurant around 3 p.m. only to realize they were closed. The sign outside said they were reopening at 4 p.m. for happy hour. It turned out they close for a couple of hours after lunch, so we decided to do a little browsing in some stores nearby until they reopened. At almost 4 p.m. on the dot, with eager stomachs and watering mouths, we returned. At that time, we were able to take a seat and were handed a special menu. After looking at the menu we were given, which included drinks and appetizers, our server informed us it was the current menu for happy hour and dinner started at 5 p.m. Since my housemate and I were extremely hungry and wanted a full meal, we decided to just do some shopping and come back for dinner. Around 5:30 p.m. we returned to the restaurant once again. Considering the runaround we had since we did not properly research their hours, we sat down starving with high expectations the food would be worth it. In my personal opinion, it was worth the wait. 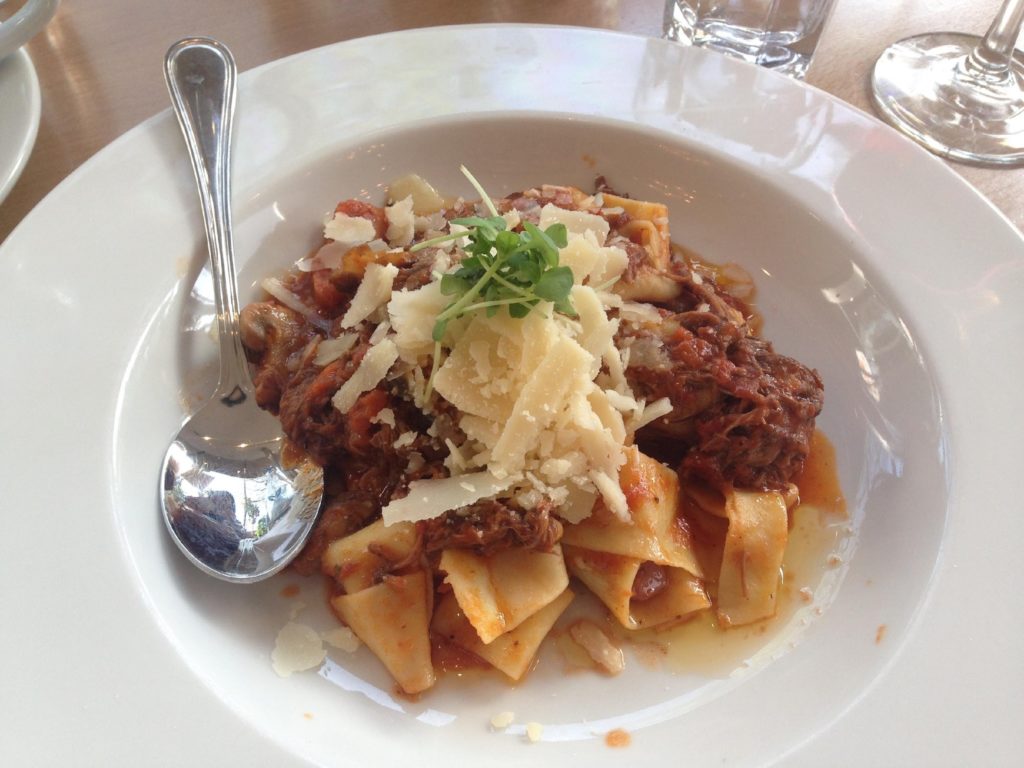 The look of the restaurant itself is what had initially drawn us in. It has a nice patio with plenty of outside seating. The restaurant has full windows on two sides so you can look out while sitting inside, giving it a very natural, airy and outdoorsy feel. With its white brick walls, bright hanging light fixtures, and rustic yet elegant décor, the restaurant was very aesthetically pleasing and charming. Upon sitting down, we were poured water from a glass bottle and handed a very large menu along with a specials menu. There was so much to choose from, I didn’t even know where to start. The food choices ranged from burgers, 12-inch pizzas, seafood dishes, pasta, sandwiches, salads and even brown rice bowls. In the end I decided to splurge a little and go with their Sundown Special, which includes a starter salad, choice of select entrees, featured wine or pint of beer and a dessert. I ordered their Caesar salad, short rib pappardelle, Cabernet Sauvignon and sea salt caramel gelato.

The wine arrived first. Personally, I am not much of a wine drinker, but I decided to try this one since it came with the special. I was not too fond of the Cabernet Sauvignon myself, but for those wine lovers out there, this kind of wine is recommended to pair well with short ribs or mushroom pasta (both of which happened to be in my meal). I eagerly awaited the arrival of the food, and when the salad came out I was pleasantly surprised. Not only was I getting a salad, but to my surprise it also came with a soup and some bread. It was served on a cute, nicely put together platter, with the soup in a little mug and salad in a little dish next to it. The soup was delicious, warm and comforting. I could taste the tomato base and it was creamy but not too heavy. It was also perfect to dip the bread in. The salad was a perfect complement to the soup. It was fresh and delicious, with crisp lettuce and classic Caesar dressing. Next, the entrée came out, looking perfect and amazingly appetizing. The short rib pappardelle included braised short ribs and a red wine mushroom ragu and was topped with shavings of reggiano. It tasted amazing. The braised short ribs were tender and melted in my mouth. The sauce was rich and hearty, served over thick, wide pasta noodles that absorbed the flavors of mushroom, tomato and salt. I quickly cleaned out my bowl, but that wasn’t the end of the meal. To top it all off, dessert was served, and it was the best way to end the meal. I was served a delicate scoop of sea salt caramel gelato. It was rich and sweet. Each cool bite was scrumptious perfection. 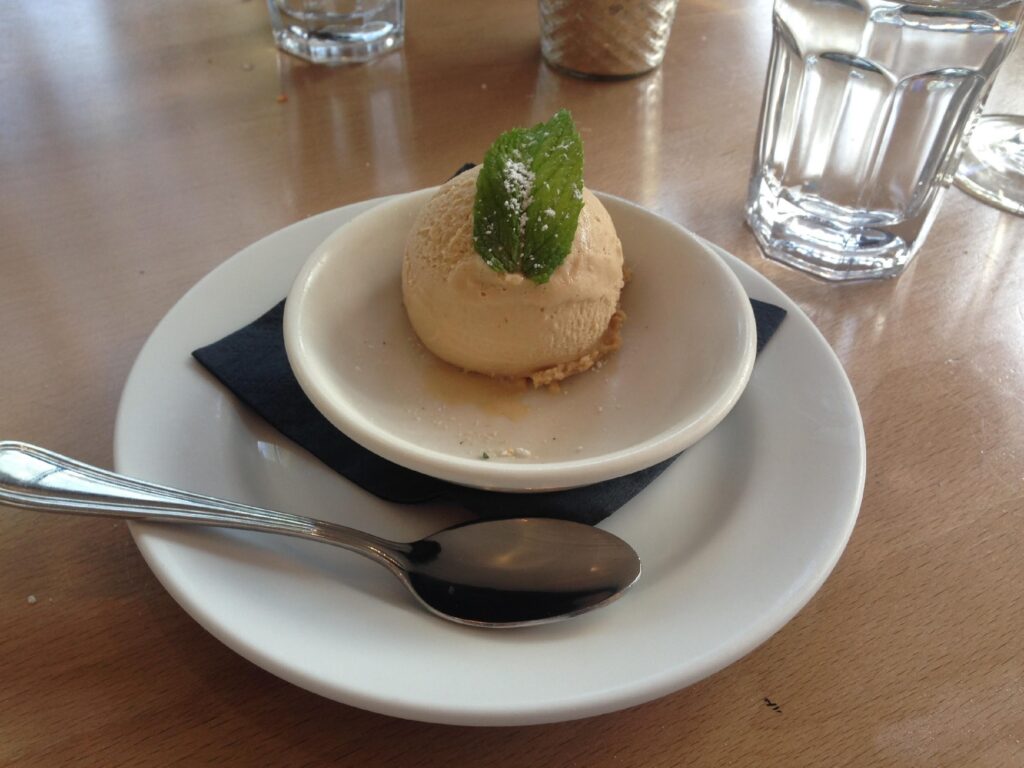 Needless to say, I left the restaurant satisfied and with a happy stomach. It has a great vibe, with a charming setting and friendly atmosphere. The food choices are endless and include a wide variety of flavors. So next time you’re downtown, I would definitely recommend stopping by (just be sure to go between 11:30 and 2:30 p.m. or 5 and 7 p.m. for the best choices and specials).