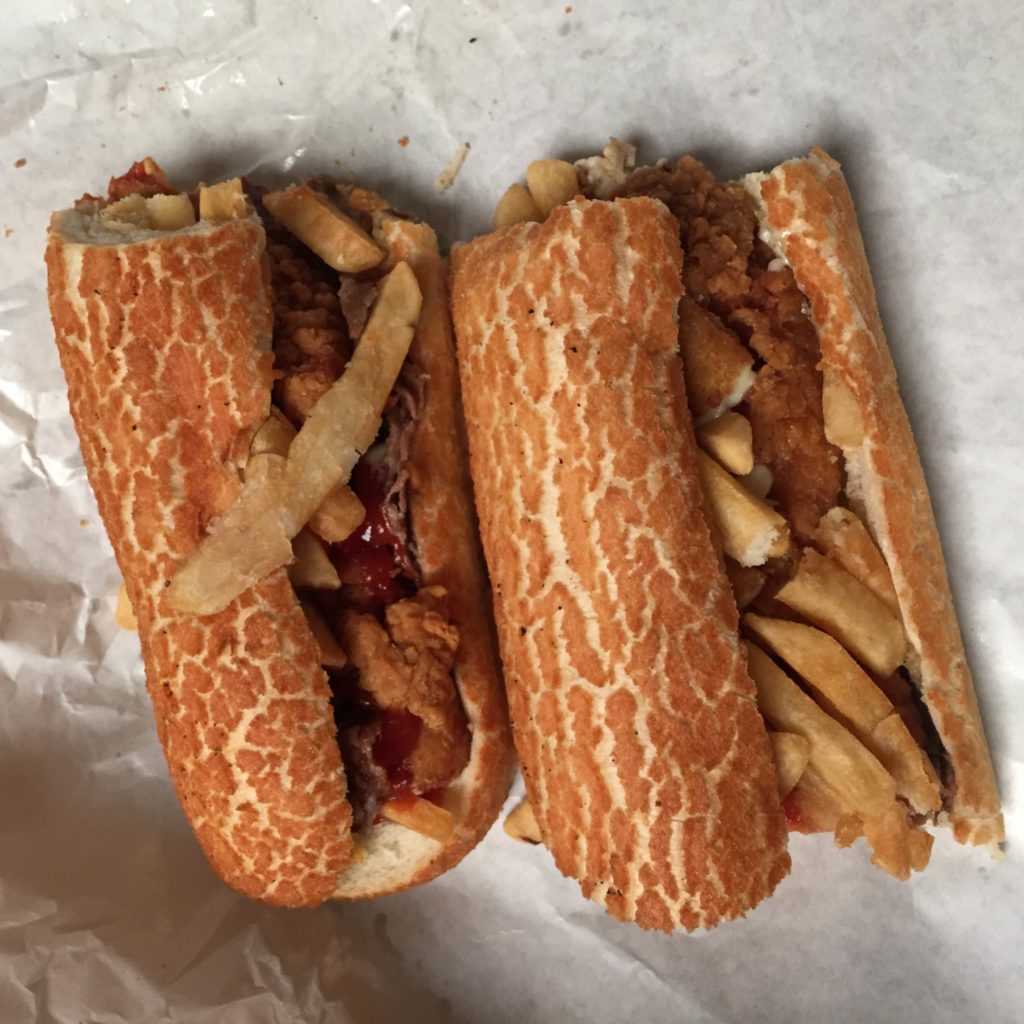 Many of you have heard the legends of I.V. Deli Mart, some of you brave souls may have even attempted to tackle these beasts. And now, for your reading pleasure, On The Menu takes on the challenge of consuming the infamous Fat Sandwiches that belong to the Pardall Road centerpiece. It may have been foolish, but somebody has got to do it! OK, probably no one ever needed this information but, goddammit, curiosity runs rampant on our staff, and we needed to know just how far our willpower and stomachs could stretch. Thus, we embarked on a grand adventure one early Saturday afternoon and tried to single-handedly eat an entire Fat Sandwich without the aid of drunchies or munchies. These are our stories in a stream-of-consciousness fashion:

Fat Sam:
I am not really sure what to make of this sandwich. The guy who sold it to me was so friendly. He even told me to come back when it was my turn for alumni weekend. How could he do me so wrong? Like, on what planet does cheesesteak, chicken tender, mozzarella, bacon, fried eggs, fries, ketchup and mayo make sense on a sandwich? I give up. I am not even halfway through and it hurts. It has lost all flavor. This is mush. I am not having this. OK, I am taking a nap. OK, now I am back. By the power of Beyonce’s Lemonade, I will finish this sandwich. Well, I am done now. Full of sodium and nothing to wash it down with. On to my next food event!
Collin McLeod avows never to eat any of I.V. Deli’s sandwiches not under the influence.

The Smoky Smoky:
To start off positively, the individual parts of the sandwich were good: cheesesteak, chili, avocado, lettuce, tomatoes, fries, jalapeño poppers, Tapatio and ranch. However, just the smell alone was nauseating. As I bit into the sandwich, I was underwhelmed by the spice factor. I expected my taste buds to be suffering second-degree burns just from reading the ingredients. I think the Tapatio was mixed with ranch pre-assemblage, and I was not a huge fan of that texture. This sandwich is something you definitely have to buck up and eat in one sitting, because there is no way you’ll ever even want to look at it again; the longer it takes you to eat it, the more you start regretting your life choices. One thing I will commend is that the bread was fantastic, but I doubt I will ever be able to eat one again.”
Samantha Salazar is too spicy to be swayed to eat The Smoky Smoky again. 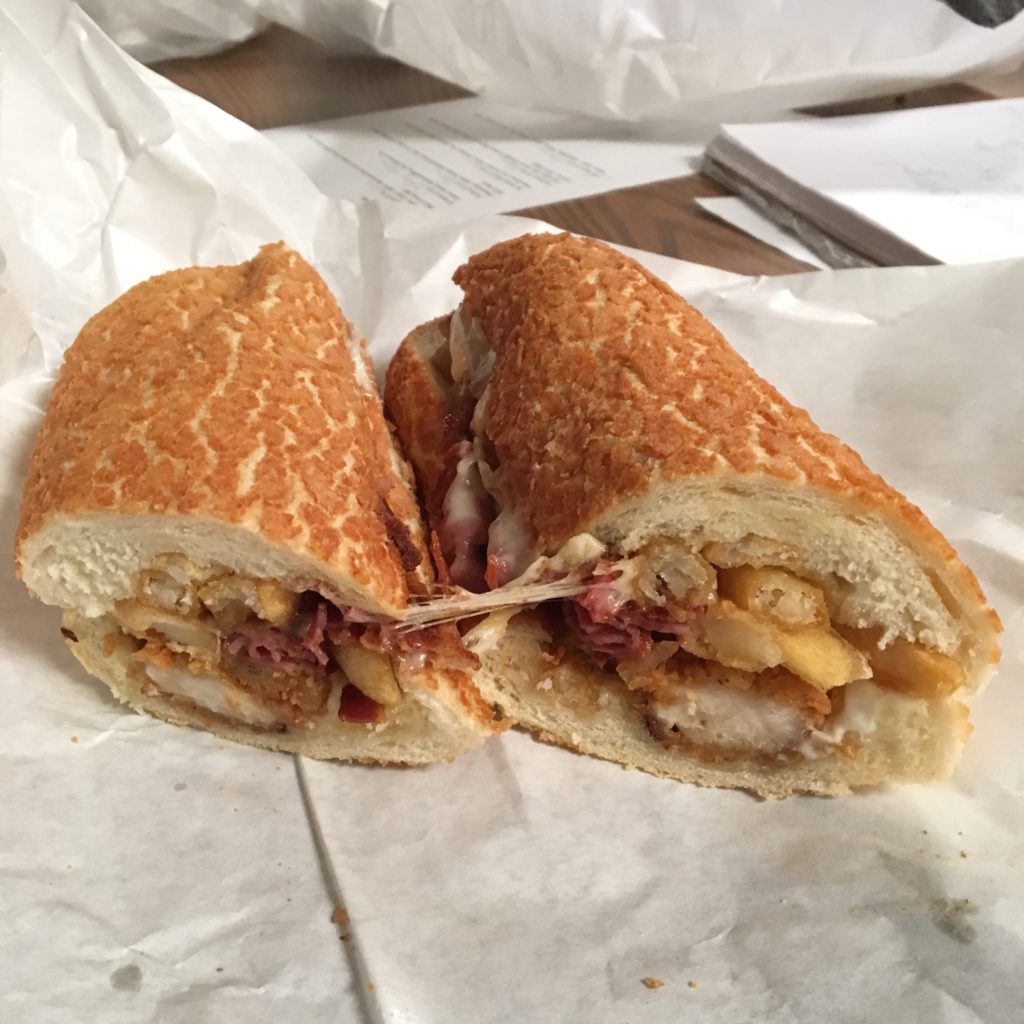 The Fat Gaucho:
When I first looked at the sandwich, I was in awe. I looked at the chicken fingers and the mozzarella sticks (my fav foods) and I instantly fell in love. It wasn’t until I took the first bite that I realized what I was truly getting myself into. THE SANDWICH WAS AMAZING. I surprisingly finished my first half within minutes and then, soon after, realized what I was doing and what laid ahead. This was a tough time (trying to convince myself to keep going), but I knew I needed to finish. I kept going; it was so tasty and I finished first out of everyone. I wasn’t even that full!
Cori Sainte Marie doesn’t want you to just eat the Fat Gaucho, she wants you to BE the Fat Gaucho.

The Fat Danny:
Okay, first bite, here we go. There’s so much cheesy gooey oniony goodness in here. It tastes like breakfast at Grandma’s … if you have a grandma who is trying to fatten you up so she can cook you in her oven. Several bites in: It doesn’t look smaller. I definitely need some water. Thank goodness for the onions and peppers in this sandwich. Besides giving it crunch, they also offset all this fatty cheese and sausage and make me feel as though I’m not totally murdering my poor arteries. I mean, they’re veggies and have vitamins, right? Right? I’m trying to eat the fries out of the sides to make it less intimidating. It’s not working. I found bacon! Hallelujah! It still doesn’t look smaller. Is it growing? Is it some sort of evil magic? I can feel the heart failure coursing through my veins. Man, this sandwich is kicking my butt. In some sick way, though, I’m still enjoying it. This quote from one of my cohorts sums up my mood right now: “This is not a pizza. This is death.” Holy mother of bacon and eggs, I’m almost positive this sandwich is trying to kill me. YES THE FIRST HALF IS GONE! Wait … it’s only the first half? There’s a whole other half? No. No, you can’t make me. I can’t do it. My poor arteries are about to implode. Noooooo. I officially surrender in the face of this sandwich. I am not worthy of its massive cheesy greatness. I shall now crawl into a hole and sleep through my food coma until I have forgotten my terrible shame.
Steenalisa Tilcock only wants to eat leafy vegetables … and pizza … and ice cream. 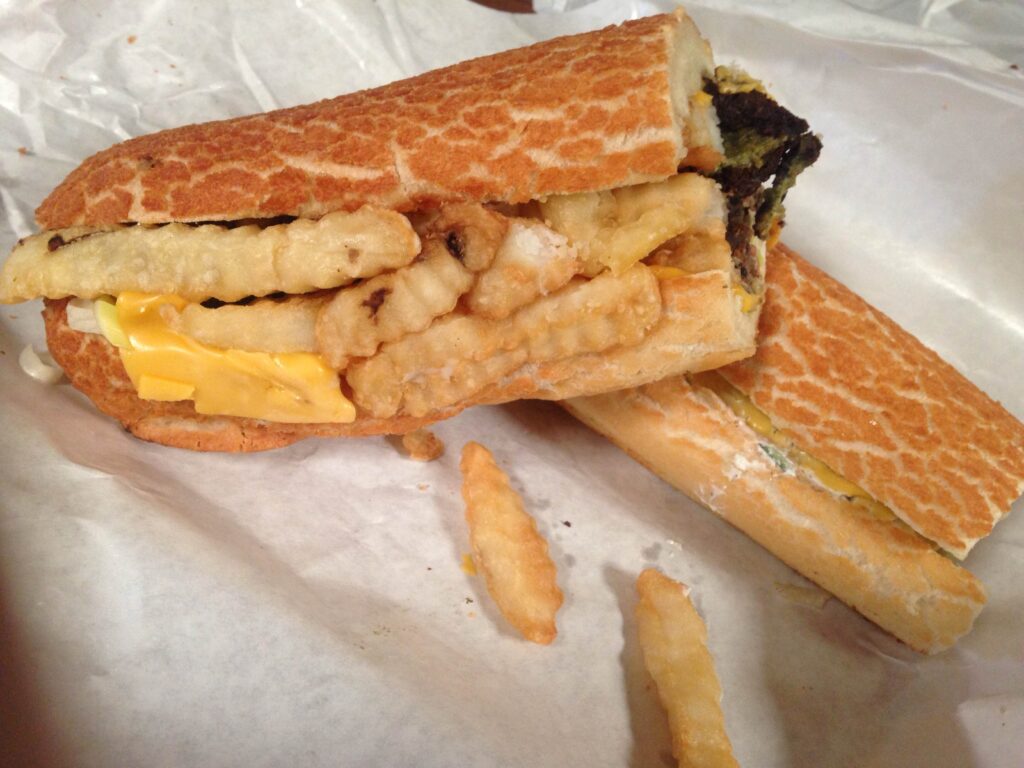 The Fat Italian:
The sandwich was very messy. Marinara sauce appears to be the primary flavor. Somewhere in all the chaos, I can taste the chicken tender in there. The awkward size makes it difficult to hold or even take a bite of. The bread is falling apart just like my hopes and dreams. Why did I do this to myself? I feel as though I’m DYING. Thank the mighty sandwich gods I wore leggings today. I’m trying and failing so hard just to finish half. Feeling weak; the sandwich has lost all flavor. In the battle of woman versus food, food won. Pretty sure I would have been sick if I ate more.
Tiffany Velazquez has suffered death by marinara.

I am horrified but awed. The sandwich demands respect. I can taste the hypertension. The sandwich is not as messy as I thought. The chicken, fries, mozzarella sticks and bread absorb the sauce. The sandwich tastes very rich. The first few bites are satisfying, but halfway through the first half, I start doubting the feasibility of actually finishing this monster. I miss eating green things. There is so much sandwich; five bites in and still so much left. Separately, all of the ingredients would be perfect, but together they are overwhelming. Sure it is tasty, but very salty. The fries are everywhere. Started out strong, but after finishing the first half, I start doubting everything. Don’t slow down! The moment you take a break to let everything settle down, it hits you. I feel weak; the food is fighting back, but I will not let the food win. One bite more and the food has won. Let the food coma commence.
Annie Golay is down for mozzarella sticks just not in her sandwhich.

The Fat Hippie:
OK, so at least mine is full of veggies, right? “This won’t be too bad,” I think to myself, “I’ve taken down Mac Daddy bowls, medium pizzas and massive plates of nachos; a little sandwich won’t defeat me. I was so full of optimism and hope. I was wrong. The flavor was there, but the veggie patties and falafel were so dry, and in my frugal state, I skipped on a drink to wash it down. Mistake number one! After a while, the flavors are no longer there; it’s become nothing more than a compilation of rich texture and sadness. Three-quarters in and I’ve become delusional. I dance woefully in my chair and watch as one of my fellow troops lapses onto the green couch for a defeated nap. I’m only three bites from finishing. I look to the person on my left with tears in my eyes. Words of peer pressure escape her lips and I consume. It’s over. I’m free. I’ll never eat again.
Marisa Ratchford has had enough bread to satisfy her carb cravings for eternity.

As you can tell, this was not a pleasant experience. However, it was an educational one. It made us all realize that food should be something you enjoy, not something you suffer through. How many times have I blindly consumed 3,000 calories on a Friday night and in the morning felt terrible? Let this be a warning to everyone that moderation is key and greasy food is great, but let’s take it one bite at a time.

Sandwich U
Reply to  Sandwich U

Sadly they only copy in theory. Our product is beyond amazing. Soon the world will know….