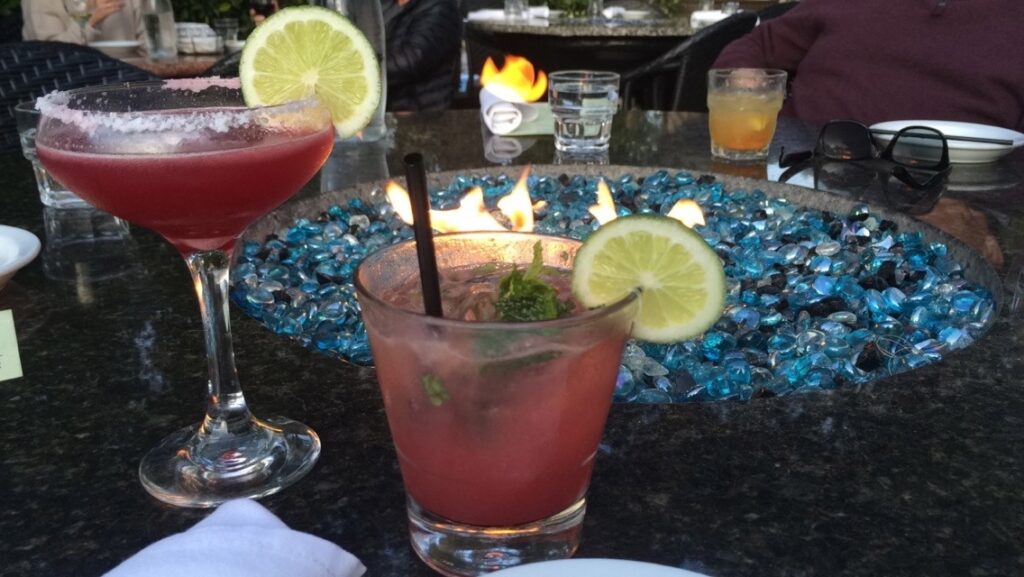 When it comes to dining out, I am a HUGE sucker for the aesthetics of a restaurant much more than the actual food itself. Basically, if I stroll down the boulevard and a restaurant as beautiful as a thousand suns catches my eye, I immediately mark that place down on my “Restaurants to Try” checklist. Of course, an alluring and delectable smell escaping between the diner’s doors would be the cherry on top.

Zaytoon, however, is a hidden Lebanese restaurant that I now pronounce my latest favorite eatery. After being referred by numbers of pals, I knew I had to unleash this mysterious golden treasure for my 21st birthday. Just a week or so ago, I journeyed to this secret spot located at the heart of downtown Santa Barbara on E. Canon Perdido. The awarding moment of the day, though, was that I was able to simply book an online reservation at the click of a mouse and avoid any ravenous waiting.

After luckily snatching a space just a tiptoe’s distance away from the entrance, I took my first gaze upon Zaytoon’s exterior and, to be completely honest, I had no idea it was a restaurant. It appeared to be a petite, little house surrounded by a white, picket fence, dangling emerald green leaves and twirling strands of white pearly lights. I could only imagine a secret garden or a wildly imaginative wonderland waiting inside. In that moment, I felt like Alice in Wonderland about to leap into the depths of the unknown rabbit hole.

The gate swung open and released the inner beauty of what Zaytoon truly represents. Tables were scattered across the outdoor brick patio that encircled a streaming cement fountain, which relayed relentless sounds of a flowing waterfall. Not all, but several of the marble tables have a fire pit located in the center emitting sensational warmth for a cozy evening with friends and family. The flames danced upon a mesmerizing bowl of sparkling blue glass that pairs exceptionally well with the starry white lights twinkling in the background. That is not all, ladies and gentlemen, because I am just getting started! To enrich the pleasurable experience even more, a live musician performed on the deck a few steps above the dining patio and alongside the fully stocked bar inside.

Now, let’s get to the moment we have all been waiting for: the FOOD! Take my hand and trust me as we dive into the abyss of my too-many-course Lebanese meal at Zaytoon:

Since it was my 21st birthday, it only seemed appropriate to begin scouring the menu for cocktails, fine wines and beers. I decided to be fruity and fun so I selected the Raspberry Mojito, which first and foremost was the best decision I made. Hands down!

What is better than sipping on a swirling pink drink with a fresh glistening lime dangling off the lip of the glass? It was like the sweet tropical escape that I am always craving. It was a perfect balance with the fruity, minty, raspberry flavors masking a good chunk of the bitter alcoholic taste sneaking into the backdrop.

I also got to snag a sip of my friend’s Pomegranate Margarita which, in my opinion, was doable but not the most pleasant since I typically prefer frozen margaritas. This margarita is for the spunky, wild person who savors the a strong alcoholic zest in their cocktails.

From a wide variety of choices, we settled on the Baba Ghannouj, Beef Sambosik and Batata Harra. All ranged from about $8-$10 and delivered the right amount of exuberance to my taste buds.

The Baba Ghannouj struck me for its charbroiled eggplant, which literally is my favorite thing in the world (kind of weird but true). This dish is an eggplant spread puréed with lemon, garlic and tahini sauce that pairs well with the complimentary pita bread. I did not notice, however, that the main entrée I was about to order would consist of a garlic hummus spread so, in the future, I would refrain from ordering this appetizer again even though it was scrumptious and satisfying.

The Beef Sambosik, on the other hand, has four golden, fried morsels that almost look like bubbly crisp wontons but are filled with ground beef and spices instead. It is wonderful with the eggplant spread to add some moisture to the dish, but overall I thought it was excellent except for the fact that it does not agree with my healthy lifestyle. Once in a while, it is nice to splurge, so go for it and bathe in the joy guilt-free!

Batata Harra — aka my absolute favorite mezza so far on Zaytoon’s menu — is a small dish containing cubed potatoes sautéed with cilantro, garlic, olive oil, lemon juice and fancy seasoning. It is disappointing that it is only served in a small bowl because WOW, we were scarfing it down like crazy. It had the perfect pop of garlic and mildly spicy flavor when you sunk your teeth into its crispy outer shell. I cannot stress enough that you guys should definitely order this appetizer if you have not already, because you are truly missing out on the whirlwind of delectable tastes.

I decided on the Lamb Kebab as my entrée as opposed to the Salmon with Basil Cream Sauce, Filet Mignon, Lemon Chicken, etc., because ever since the first day I ordered lamb, I have fallen in love with it. The Lamb Kebab is charbroiled, which is a healthier alternative to other styles of cooking, and marinated in olive oil, garlic, lemon juice and seasoning with a side of rice pilaf and fattoush salad (tossed with homemade garlic sauce with toasted pita bread pieces and fresh veggies). The lamb had the perfect fluff and smooth bite to it, which highlighted its rich juicy flavor. It paired exceptionally well with the rice pilaf and complimentary garlic-infused hummus. The salad had a little too strong of a kick to it for me to finish the entire portion, but, overall, I give this entrée a GIANT thumbs up!

I was also able to try a bite from the Lamb Shawarma, which is prepared differently and sliced significantly thinner. The strips of lamb are marinated and slowly broiled on a vertical rotating grill, which enhanced the zest and delectableness of the dish. These dishes all range around $20 each, which is pricey but not excessive. It is well worth the extra bucks; I can pinky promise that!

It was a birthday surprise from the incredibly sweet waitress, but I was delivered Baklava with a lit candle to make a wish, and it was simply enchanting. Baklava consists of layers of filo pastry, walnuts and honey with a scoop of vanilla ice cream and whipped cream. These adorable bite-sized pieces were a perfect fairytale ending to my night because of their crispy outer coating and fluffy honey insides oozing out of every bite.

Now, here lies the moment that I could not resist because of its uniqueness. Hookahs were prepared at request for $25 each with your choosing of any two-flavor combos from the list. My friends and I agreed upon Guava and Strawberry, which was a real success. The staff would replenish the burning coals whenever necessary and the hookah was a spectacular ocean blue with a spiral sparkling hose that appeared as if it were a magic wand. Other flavors include Double Apple, White Peach, Watermelon Freeze, Blue Mist, Pirate’s Cave and Sex on the Beach (which I have heard is one of the best).

It is safe to say Zaytoon was a flawless magical dining experience that left us strolling out at closing time like princesses. I highly suggest you visit there soon and get the royal treatment you deserve! (Remember to book a reservation online in advance, and its hours are only 5-10 p.m.)