The Daily Nexus
Sign of the Times
UCSB For Bernie: Introducing Local Action
March 12, 2016 at 3:32 pm by UCSB for Bernie 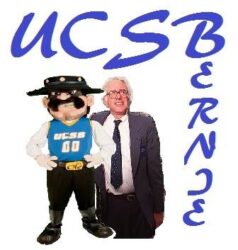 I invite you to continue the efforts to put Bernie Sanders in as the Democratic presidential nominee. Bernie Sanders will not quit, so nor should you. Bernie Sanders’ campaign announced that they will not stop vying for the Democratic presidential nomination after the slight “loss” experienced on Super Tuesday. Bernie Sanders’ campaign has also said that they will not stop until the Democratic National Convention in July when all of the super delegates formally cast their vote for the nomination. The major media outlets have been relentless in naming Clinton the big victor, in many states before the votes were actually counted. None of this bothers Bernard “Bernie” Sanders or his campaign full of supporters. Some Bernie fans have been feeling slightly discouraged as of late, but fear not! For I bring good news:

This race is going to be a marathon, not a sprint. Bernie Sanders currently has 551 elected delegates while Hillary has 770, out of the 4,051 elected delegates. Bernie is gaining ground, especially after having huge wins in Michigan and other states over the past weekend. Either candidate will need 2,383 delegates total to win the nomination. Superdelegates will not be able to cast their vote officially until July, so superdelegates do not come into play until July. There are 714 Democratic superdelegates which will NOT decide the election for the presidential primary. We, voters across the country, will decide the nominee and the superdelegates will be obliged to fall in line with the elected officials. Bernie Sanders is only trailing by some 200 elected delegates. So, let’s take a look at the remaining states. The verdict is that they are overwhelmingly in support of Sanders and he is closing the gap on Hillary. With states like Oregon, Michigan and our beloved state of California, Bernie and Hillary have a long way to go.

We, voters across the country, will decide the nominee and the superdelegates will be obliged to fall in line with the elected officials.

Favorable Democratic states are up next in the primary election. OK, I will concede that Hillary is winning so far in this primary election. However, when we take a look at the states she has won so far, they overwhelmingly vote Republican in the national election. The states that are coming up in this year’s Democratic primary are state that actually vote Democratic in the national election. These are Democratic states like Michigan, which Bernie has just won, Iowa, Illinois, California and Pennsylvania. It’s states like these where Bernie is leading in some polls and closing the gap in all. He is only down by 1 percent in Wisconsin, and not too far off in others. These are the states that will provide the foundation for a long-term national election and are states that Bernie has growing support in.

Bernie Sanders is poised to do well throughout the rest of the race. Here, at UCSB For Bernie, we have not slowed down either.

In the beginning the media labeled Bernie Sanders a “fringe” candidate and we were screaming “the revolution will not be televised.” Now, Bernie is receiving growing support around the country and we are rallying for him to gain the Democratic nomination. His campaign has never slowed down and Bernie is going to continue to work to get the Democratic nomination in July. He had big wins over this past weekend in Kansas, Nebraska, Maine and Michigan. Bernie Sanders is poised to do well throughout the rest of the race. Here, at UCSB For Bernie, we have not slowed down either. We invite you to go to “UCSB For Bernie” on Facebook to see all of our upcoming events and to stay connected with the Democratic presidential nomination race, and hopefully the presidential race as well!

The numbers from the census also show that millennials have just surpassed baby-boomers in population size. Bernie Sanders undoubtedly does better when young voters show up to vote.

I ask that after you like our Facebook page you will consider talking to your friends, family and loved ones about Bernie Sanders — Yeah, I said it. Bernie will continue to need our support throughout the rest of this race. Polls show that only some 40 per of voters aged 18-29 showed up to vote in 2012. The numbers from the census also show that millennials have just surpassed baby-boomers in population size. Bernie Sanders undoubtedly does better when young voters show up to vote. There are a variety of ways in which we can help. We can donate (I donate as little as $3 sometimes). We can phone bank (a process that is not as terrifying as I originally thought). We can canvass in areas like Isla Vista and downtown Santa Barbara to spread his campaign’s message (hangout in public spaces and talk to others about Bernie). There is literally so much that we can do. Bernie’s campaign is moving forward from minor contributions and volunteered time from people like you!

So lastly, I will echo the message from the Bernie Sanders’ campaign: What losses? We will not stop.

Riley Brann and UCSB For Bernie will keep campaigning to see their presidential nominee make it to the White House. They hope everyone gets involved in the democratic process of voting to have their voices heard.

Don’t get me wrong. Bernie is better than Hillary. But that isn’t saying a heck of a lot. Socialism remains an idea all about coercion and taking freedom for granted. Socialism is the stop on the road between capitalism and communism. It’s basically communism wrapped up in the pretty package of free stuff. I don’t know if this YouTube link (2 1/2 minutes) will work here. https://www.youtube.com/watch?v=MQ0-cDKMS5M To quote the late Nobel Prize in Economics laureate Milton Friedman: “The world runs on individuals pursuing their separate interests. The great achievements of civilization have not come from government bureaus. Einstein didn’t… Read more »

Just to be clear. A victory in Michigan by less than 2 points, while receiving fewer than 50% of the vote and gaining all of 7 delegates is a huge win. But losing 5 states in one day, most by double digits, and dropping behind by an additional 100 delegates on top of the 200 already trailing is a slight “loss?”

That’s some weird math. But so is the math associated with current pledged delegate counts which are actually 1,132-818 after Super Tuesday 3 (not the 770-551 in the article).

My bad, the delegate counts in the article are probably accurate to the published date which I didn’t notice. This article is referencing a different Super Tuesday than last night. I apologize.

The underlying point of my comment is that when virtual ties being are considered huge wins it’s probably a bad sign.

Considering history, socialism is dangerous because: 1) It poses extreme danger to freedom of speech, and government sanctioned punishment of dissenters tends to take hold, gradually increasing in severity (dissent includes the ever-broadening category of “hate speech”) 2) As a continuation of (1), civil government-controlled media can easily become the only mainstream and even existing means of news 3) In pursuit of “equality”, secularization will become pervasive 4) Religious organizations will have to struggle to maintain their existence if they intend to preserve their focused missions 5) Interpretation of the Constitution will become open-ended and subjective, rendering the document obsolete… Read more »

It’s not just UCSB students who are wholly ignorant about socialism, and it’s dependency over time on increasing phases of more and more brutal violence to achieve it’s utopian goal of equal results.

Any university filled with Millennials who never learned about it’s history is in the same boat. And that’s every university.