The UCSB women’s basketball team advances to the Quarterfinals of the Big West Conference Tournament after its 62-43 victory over UC Irvine Tuesday night. The No. 5 seeded Gauchos’ first round victory was their first postseason win since defeating CSUN in the 2012-13 Big West tournament.

Despite experiencing its worst three-point shooting performance of the season, going 0-13 from beyond the arc, a 29-6 run in the fourth quarter allowed Santa Barbara to break away from the Anteaters’ narrow pursuit. 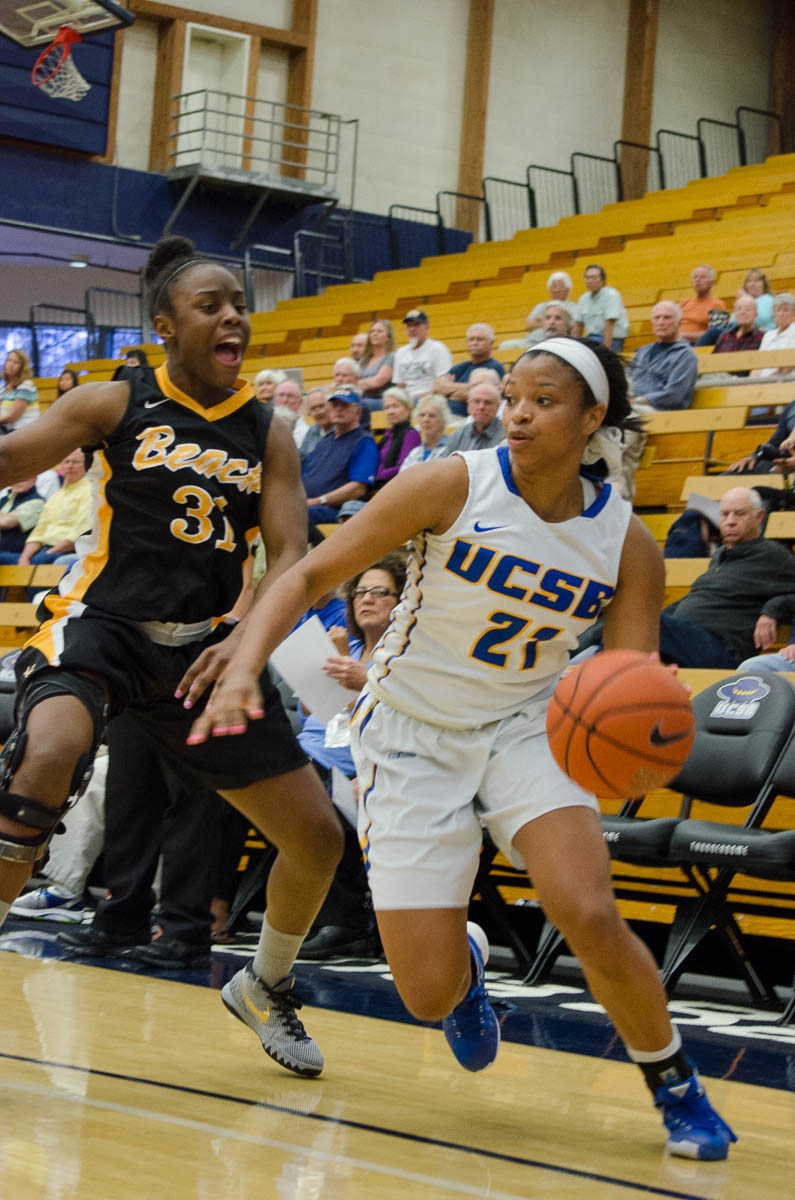 Chaya Durr slides around a defender towards the basket. Christina DeMarzo/Daily Nexus

The two combined for 30 of the team’s 38 bench points as Newton tallied her third double-double of the season, tying her season-high of 16 points on 6-9 shooting to go along with 10 rebounds. Ware had the most immediate impact, scoring 14 points on a perfect 6-6 shooting night in just 18 minutes of play.

UC Irvine concluded Tuesday’s game with a 17-66 shooting performance in addition to finishing 0-4 from behind the perimeter.

Still, the Anteater’ play through the first three quarters of Tuesday’s game convinced many that a possible upset was in the works.

It began with UCI possessing a 12-5 lead nearly halfway through the first quarter. The seven-point lead would go on to be the Anteaters’ largest of the game. Staying active for Irvine in the opening period was junior forward Mckenzie Piper with four of her eight points and five of her eight rebounds occurring during the period.

However, Irvine was held scoreless for the remaining 5:37 of first quarter as UCSB went on a 5-0 run to close out the quarter with a tied score of 12-12.

Neither team could score a basket to begin the second quarter with the first point of the period being at the 6:49 mark from a made free-throw by UCSB freshman guard Coco Miller.

A total of four lead changes and two ties occurred during the third quarter. Tied 34-34, a layup by sophomore guard Makala Roper handed UCSB a 36-34 lead heading into the game’s final period.

While the Anteaters recorded their best shooting percentage of 38.5 percent in the third quarter, they faltered in the fourth with a 15.8 field goal percentage to end the game.

As UCI was plagued by its shooting woes, UCSB registered its best shooting performance of the game with a 52.6 shooting percentage in the final quarter. At the helm of the Gauchos’ late surge was Ware with 10 points to help lead UCSB to its 62-43 victory.

Santa Barbara will look to punch its ticket to Anaheim tonight with a matchup against No. 4 seeded UC Davis at 8:30 p.m. in the Bren Events Center.