While harboring a 55-54 lead with 58 seconds remaining in regulation, the UCSB women’s basketball team’s flurry of self-inflicted turnovers reached its climax after a UCSB steal turned into a turnover as junior center Je Zhe Newton’s pass was intercepted by Long Beach State’s Chantel Dooley with 52 seconds left to play. 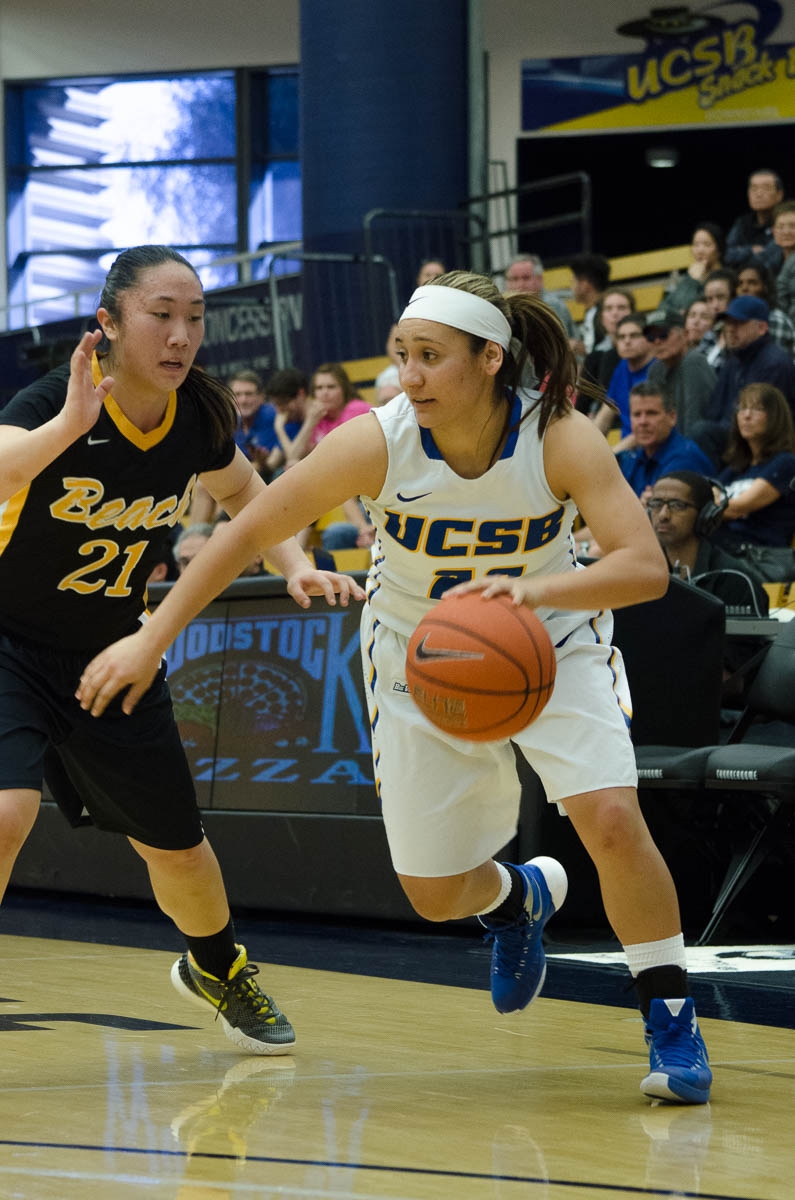 With the game at its most intense period, junior guard Raven Benton emerged in the clutch with a go-ahead ‘And-1’ layup with 17 seconds remaining along with converting at the free-throw line to hand LBSU a 57-55 lead.

It was the allowance of this basket that frustrated Head Coach Bonnie Henrickson as her and the Gauchos knew the ball would be in Benton’s hands.

“We made really bad decisions,” Henrickson said. “You get to choose if you force her [Benton] baseline or middle. We forced her middle to her left hand which is where she wants to go and it’s an And-1. Just undisciplined.”

Hope remained on the UCSB sideline as junior point guard Onome Jemerigbe dashed coast to coast for the game-tying layup with 10 seconds to send the game into overtime. But the Gauchos’ comeback chances were ended when 49ers’ junior forward Madison Montgomery rejected the layup attempt prompting the game’s ending with a 58-55 LBSU victory after a made free-throw by junior guard Anna Kim.

Saturday’s loss made the race for a top-four seed in the Big West Conference standings more challenging for the Gauchos as they missed out on the opportunity to tie the 49ers for fourth-place. In addition to UC Davis losing to UCR, Long Beach State was able to move up to third-place in the conference standings.

However, during Saturday’s post-game interview, Coach Henrickson assured the media that the team’s standing was the least of her worries with three games remaining in the regular season.

“The best thing we could have done was beat Long Beach [Saturday],” Henrickson said. “I’ve looked at the format, but I need to focus on us playing better. I don’t get caught up in all of that. If we play well, all that will take care of itself.”

The format of the Big West Tournament permits the No. 1 and No. 2 seeds to skip the first two rounds of the tournament onto the semifinal. As for the No. 3 and No. 4 seeds, they are granted a first-round bye.

It is highly unlikely that UCSB will earn a No. 1 or No. 2 seed at this point in the season, but the Gauchos could possibly earn the No. 3 seed or a likely No. 4 seed as UC Davis sits ahead of UCSB in fourth-place at 8-5 in Big West play.

With low-scoring totals from both teams, the largest lead of Saturday’s game was from Long Beach by a deficit of seven. Three points was the largest scoring differential by quarters as the 49ers narrowly outscored UCSB 16-13 in the third period.

No player in UCSB’s starting lineup finished with double-figures in points, leaving the offensive duties to the Gauchos’ reserves off the bench.

Still, UCSB was more efficient shooting the ball than LBSU amassing a 45.2 field goal percentage to the 49ers’ 36.2 percentage. Santa Barbara was able to surpass the 49ers’ full-court press and 2-3 zone defense, but still had 23 turnovers.

“I thought the press was better at their place,” Henrickson said. “But how many of those [turnovers] are unforced? Travel, dribble pick-ups, and throwing it out of bounds. It’s just undisciplined. That’s my responsibility, I’ve got a role in that as well. They [LBSU] can turn us over, but we turned ourselves over.”

Leading Santa Barbara in points was senior guard Jasmine Ware with 16 points as she nearly registered her first-career triple-double tallying eight assists and six rebounds as well. Adding to the Gauchos’ production off the bench was Newton, who recorded her second double-double of the season with 14 points and 12 rebounds.

Newton’s 6-6 performance at the free throw line in the first half provided the majority of points in Santa Barbara’s 10-2 run, giving it a 27-25 lead at halftime.

In spite of its momentum to close out the first half, UCSB was sluggish in the second half and failed to contain LBSU in the opening of the third quarter, allowing the 49ers to go on a 9-0 run to take a 34-27 lead.

“I thought we were terrible and we were up by two,” Henrickson said. We had no pop, no energy. [It shows] how consistent you have to be, how well you have to play, and how hard you have to play every single night. We’re not flying around, it’s quiet… that’s frustrating.”

Yet, UCSB’s 5-0 scoring run after calling a timeout trimmed its deficit to two at 32-34.

Two quick fouls during the first quarter led to Benton playing in just three minutes of the first half as she sat out the entirety of the second quarter, having taken no shot attempts in the first half.

After a scoreless first half, Benton erupted for all 19 of her points in the second half. She scored the 49ers’ last 11 points of the third quarter and had eight points in the fourth quarter. She concluded Saturday shooting 7-11 from the field and went 5-6 from the free-throw line.

The 49ers entered Saturday’s matchup shooting over 35 percent from beyond the arc in conference play, but were contained to a 23.5 three-point percentage, going 4-17 from behind the perimeter.

However, draining two pivotal three-pointers was sophomore guard Gigi Hascheff. She finished the game with 11 points and at one point with 4:47 remaining in the game it was her shot form long-range that handed LBSU a 52-51 lead.

Although UCSB managed to gain the lead twice after Hascheff’s three-pointer, Benton’s scoring outburst was too much for the Gauchos to contain as she led the 49ers to their 58-55 victory.

UCSB will play in its last home game of the season this Thursday, Feb. 25 versus UC Irvine at 7 p.m. in the Thunderdome.