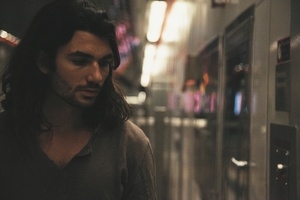 Few people watched as Tyson Leonard, the violinist and founder of the band Tropo, a man in a simple black T-shirt holding a violin, made his way onto the stage. Although Tropo was originally a one-man band, Leonard was later accompanied by drummer Adam Kapuscinski and bassist Grant Leonard. Interestingly, their jazzy and classical rhythm is integrated with a lush synth, providing an electronic club atmosphere. As more people filled the room, a funkier and groovier tempo arose, causing the audience to start dancing, along with a soothing touch of vocals from Leonard, maintaining a relaxing rhythm. This portion of the show felt as if it was a Boiler Room session with Flume and Yo-Yo Ma. Despite the upbeat feel, Tropo lacked some of the interaction and performance expertise that was embodied by the subsequent performers.

Upon gathering their various instruments, Tropo thanked Santa Barbara’s amazing crowd and made their way off stage. Throughout the intermission I overheard some conversations and managed to interact with a few of the audience members. Two young women told me their reasons for being at the show that night.

“My friend and I were just looking for a place with good music and we came across this, we’ve never heard of any of these artists before,” stated one of the girls. Her friend then went on to explain, “We were just looking for good music, really, of any genre.” Although they were unfamiliar with the artists prior to the show, they both agreed that the music was surprisingly sensational.

The lineup for the night was perfect for just that — anyone with an eclectic taste in music and a yearning for melodic jams.

A skinny and tall young man approached the mic with high intensity. “Can we turn up? It’s fucking Saturday night!” yelled Lafa Taylor, the Oakland-based singer/emcee/producer. Throughout his career, Taylor has managed to find himself incorporating a variety of different genres into his music, leading to a unique artistic performance. Not only is the music that Lafa Taylor has to offer noteworthy, but he also has an impressive ability to engage the audience and leave them craving more. Taylor’s beats were so ardent that each time the bass dropped the venue shook and the crowd became invigorated and overcome by the music. “Y’all feel that shit!?” yelled the emcee. Although heavily influenced by trap, Taylor has managed to dig deep into the roots of R&B and old-school hip hop, incorporating it into his setlist. People sang along as Ginuwine’s “Pony” came on and a nostalgic feeling emerged as Notorious B.I.G’s “Hypnotize” resonated through the loudspeakers, dispersing into the elated audience.

Lafa Taylor’s “It’s all music” message pervaded his performance to emphasize that despite the wide genres of music exemplified, the ultimate goal was to play soulful music that would allow the audience to lose themselves in the music.

After a long wait, Stephen finally took the stage, leading everyone to force their way even closer to him, ensuring a better view. Although Stephen gained much of his fanbase from the song “Bullet Train,” which he made back in 2013 while still in college. He has since transitioned into a somewhat new sound that has a much more genuine essence. Similar to a vast majority of other artists that create music without the intention to simply attain great wealth, Stephen has a relatively small fanbase. Every song was filled with a high level of intimacy due to all of Stephen’s music surprisingly being backed up by the singing of the crowd. Almost everyone in attendance sang the lyrics to every song he played, each time becoming more entranced with his words and the music. Nonetheless, this was not the only impressive element of Stephen’s performance, as he demonstrated his incredible knowledge of almost every instrument that surrounded him and as he not only sang, but also played the drums and guitar. “I’m gonna be real with you guys, that was probably the best I’ve ever played a guitar,” Stephen shared after he gave an astonishingly remarkable guitar solo. He went on to make it clear that he could, for a fact, play a rad drum solo — “Alright, before I leave I have to play the drums,” announced Stephen as he grabbed the drumsticks and had an intense drum-off with the original drummer. To finish off the show, Stephen performed a phenomenal live version of his cover of Adele’s “Hello.”

The night was, in the words of Lafa Taylor himself, “A fusion of music, multiple styles mixed together!”