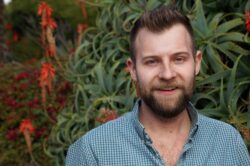 Through his research, Jeffrey Hunger shows that there are better and more accurate alternate indicators of health than the popularly used body mass index.

Everyone has heard of it; some know it all too well. The Body Mass Index (BMI) has served as the go-to source for affirmation and criticism of health for too long, according to UCSB researcher and graduate student Jeffrey Hunger. His work shows that BMI is a terrible health measure, uncorrelated with actual health.

“These are a fairly well established set of cardio-metabolic indicators of health. Even though somebody may be categorized as overweight or obese based on their BMI, we know that they’re actually healthy when we look at these clinical markers of health,” Hunger said.

According to Hunger, the clinical indicators are much more truthful because they directly reflect health conditions rather than relying on just one characteristic of the body. He refers to BMI as a “crude proxy,” arguing that the BMI marker should be completely done away with.

“Our data show that it does a really poor job categorizing health, and I think that at the same time it really overemphasizes weight as a marker of health itself. I think this should really be the final nail in the coffin for BMI,” Hunger said.

So, is there a level at which the amount of body fat itself is unhealthy?

“Body fat is different from the BMI, which I think is a common misconception. Most people assume that the BMI does a good job of capturing body fat, which it really doesn’t,” Hunger said.

There are “healthy” parameters for body fat that have been set out, just like those for BMI, but Hunger steers clear of the topic, further pressing his point that the amount of body fat is insignificant in light of the more accurate health indicators.

As his theory goes, body fat is a distant and subsequently inaccurate way to determine health. All the issues associated with being unhealthily “fat,” like heart problems, diabetes, high cholesterol and bone weakness, can be examined more accurately using the tried and true clinical measures. So body fat plays into the equation, but more intermittently, as a background feature that is rarely representative of the exact issues that lie beneath the surface.

But Googling your BMI is just so easy! Hunger argues that the ease and accessibility of BMI is why its use has persisted for so long. It seems so much more challenging to seek out the six indicators of clinical health, which sounds like an ancient collection of Buddhist precepts: wonderfully idealistic, yet realistically unattainable. But at least for the three main indicators, Hunger says, figuring them out is simple: Go to the doctor for a blood draw and a blood pressure test.

“I think they’re a lot more accessible than people think. From what I’ve had done at the health services, [Student Health], you can definitely go there and get your triglycerides, your cholesterol and your blood glucose checked,” Hunger said.

He admits that a blood draw and a trip to the doctor is more time consuming than a quick Google search, but, “quick and easy isn’t always the best route. With a little more effort, we can get a deeper understanding of individual health,” Hunger said.

Attaining this deeper level of understanding is very important for the individual as well as for our society as a whole. According to his website, his field of study focuses on the personal and social psychological effects of weight-based stigma in our society.

Inaccurate measures of “health,” like BMI, lead to negative self-image and body shaming, which evolves into a vicious cycle of poor mental and physical wellbeing.

“Perhaps we can convince people that this conversation needs to shift away from weight and emphasize health, and hopefully we can see some of this stigma associated with weight go down,” Hunger said.

A version of this story appeared on p. 14 of the Thursday, Feb. 18 print edition of the Daily Nexus.