The Daily Nexus
Sports
As Big West Tourney Nears, UCSB Looking for Wins Against CSUN and LBSU
February 18, 2016 at 5:05 am by Sean White

With just five games remaining, the UCSB women’s basketball team looks to make a late push in the Big West standings as the conference tournament approaches. At 9-16 overall and 6-5 in conference play, the Gauchos currently are in fifth-place. 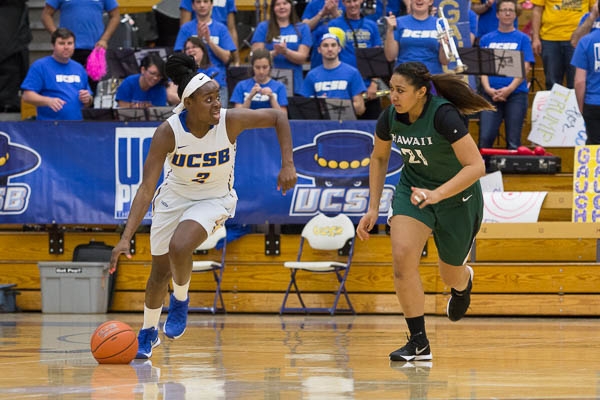 The opportunity for UCSB to ascend in the conference standings is most optimal as it prepares for three-straight home games. After splitting their pair of games last week with an 80-62 win over UCI and a 60-52 loss to Long Beach State, the Gauchos prepare for rematches versus Cal State Northridge tonight and LBSU on Saturday.

Chasing UCSB are the Matadors in sixth-place at 6-18, 4-6 in the Big West. They were defeated by UCSB 65-49 in the first meeting between the two teams two weeks ago. The 49ers managed to redeem their first road loss of the conference season at Hawaii, which ended their five-game winning streak, with their victory over UCSB last weekend. LBSU ranks fourth in the Big West with an 18-6 overall and 7-3 conference record.

After a 2-12 start in its non-conference schedule, it seemed like the reigning conference tournament champions were destined for a first-round exit in the postseason. Although the Matadors remain below the .500 mark in Big West play, they could be the ‘cinderella’ story of this year’s tournament in March.

Central to CSUN’s improvements in the second half of the season has been the emergence of freshman center Channon Fluker. After starting in just one game during the non-conference portion of the season averaging 6.6 points per game and 6.5 rebounds per game, Fluker has been one of the most dominant post players since the start of the Big West schedule.

Recently, Fluker has recorded seven consecutive double-doubles and is averaging 20.8 points and 13.9 rebounds per game. Through 10 Big West games, she has led CSUN with 16.7 ppg and 12.4 rebounds per game. Both conference averages lead the Big West thus far.

She didn’t start in the Matadors’ first meeting against the Gauchos, and finished with eight points on 3-8 shooting and a game-high 15 rebounds in 26 minutes of play. While the addition of Fluker to the team’s starting lineup may make a difference, the Matadors hope to avoid another inefficient shooting night. Overall, CSUN shot 19-53 (35.8 percent) and 3-13 (23.1 percent) from beyond the arc in the Feb. 3 meeting.

As for UCSB, it was a phenomenal shooting night for the Gauchos, posting their third best three-point shooting performance of the season at 42.9 percent. Nonetheless, Santa Barbara notched a 45.8 field goal percentage to complement its long-range shooting.

Contributing to the Gauchos’ fluent shooting from behind the perimeter and from other areas of the court was senior guard Jasmine Ware. Although she attempted just one shot from deep, she registered a game-high 17 points on an 8-11 shooting effort.

Santa Barbara will attempt to recover its tremendous three-point shooting after an 18.2 field goal percentage from beyond the arc last Saturday at LBSU. However, ensuring that it contains Fluker will be the Gauchos’ main priority entering tonight.

Santa Barbara will seek to rally back from its worst shooting night from the field (28.8 percent) and from behind the three-point line (18.2 percent) in a conference game this season in its loss to the 49ers. Once again, UCSB will have to endure Long Beach State’s stout defense which leads the Big West and ranks 13th in the nation with 21.3 turnovers forced per game.

Although UCSB forced 21 turnovers last Saturday, it allowed Long Beach State to capitalize on points off turnovers at a greater pace of 25-17 in which the Gauchos turned the ball over 18 times. After netting a career-high 20 points, four assists and four steals in the team’s win over UCI, junior point guard Onome Jemerigbe was responsible for six of UCSB’s 18 turnovers against LBSU.

Benefitting from the 49ers’ advantage in points off turnovers were junior forward Madison Montgomery and junior guard Raven Benton. Both finished with 15 points and were precise with their shot selection. Montgomery shot 7-11 from the field, while Benton went 5-6 to go along with three steals.

In order for UCSB to possibly defeat LBSU, not only will it need to reduce its amount of turnovers, but it will need more production from its bench. The Gauchos were outscored 24-13 in bench points while Roper was the only player on the team to notch double-figures in scoring with 16 points on a rough 4-14 shooting afternoon. Despite 21 minutes from Ware and 26 minutes from senior guard Dioseline Lopez, the two combined for 11 points on 4-11 shooting.

Even though UCSB managed to tie the game at a score of 48-48 in the fourth quarter, it lacked a consistent source of offense to secure a victory.

Tonight’s game versus CSUN will begin at 7 p.m. The Gauchos will welcome Long Beach State to the Thunderdome on Saturday, Feb. 20 and face the 49ers at 2 p.m.