Back at home after last week’s trip to No. 2 BYU, the No. 10 UCSB men’s volleyball team grabbed a pair of straight-set wins against No. 11 UC Irvine and unranked UC San Diego. 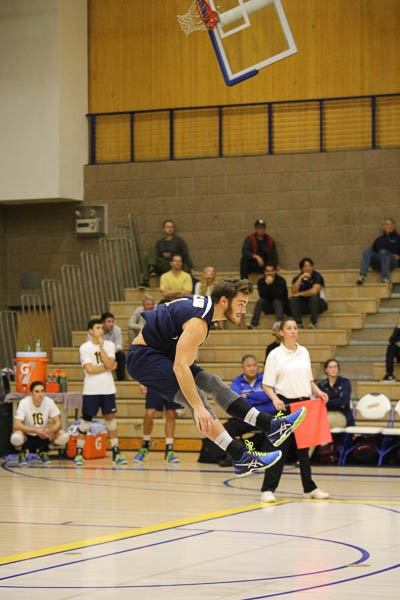 With the wins, the Gauchos improved to 6-4 in the MPSF and 10-5 overall, placing them in sixth place, just two games behind conference-leaders No. 1 CSULB, No. 3 UCLA, and No. 4 Stanford. After last week’s games, Irvine dropped to 3-7 in MPSF play, 4-8 overall. San Diego remained winless in conference play, now sitting at 0-10 in the MPSF and 3-11 overall.

Leading up to the Irvine match last Wednesday, UCSB had lost its last three matches and were looking to end its rough stretch with its pair of home games. Adding to their motivation, the Gauchos only other conference loss aside from their latest three-game losing streak came in their MPSF opener at Irvine.

“It wasn’t the team that I wanted to beat. They had a few starters that were out, but we came in and took care of business, followed the scouting report, and it ended in a win,” redshirt senior middle blocker Ryan Hardy said.

Hardy tallied six kills and four block assists, helping his team to a 25-17, 26-24, 25-17 win over its MPSF counterpart. Redshirt senior outside hitter Austin Kingi led the charge for the Gauchos with 10 kills and five digs, both team-highs on the night.

Irvine played without junior opposite Tamir Hershko, who is leading the team in kills and averaging an astounding 4.07 kills per set. The Gauchos took advantage of the Anteaters’ missing star, out blocking the visitors 18-4 and holding the injury-depleted Irvine squad to a .081 hitting percentage.

Friday, UCSB hosted UCSD, who currently sits in last of the MPSF standings, and the match didn’t start how the Gauchos had planned.

In the first set, the Tritons jumped out to a surprising 15-12 lead, and in the second they led 17-13 at one point. In both sets, however, the Gauchos came back from the deficits behind redshirt junior opposite Matt Marsh’s 15-kill night. Senior setter Jonah Seif handed in a usually steady performance with a team-high 35 assists and four kills.

“A lot of the times we come in and we take teams for granted or take them lightly. The energy was low but we recognized that and fixed it in the third set and took care of business.”

With the game all but won late in the third, Head Coach Rick McLaughlin mixed up the lineup, giving all of the bench players a chance to close out the match. The coach used all 14 of his active players on the night, using the chance to give playing time to some of the less-experienced players.

“Everyone was stoked,” Hardy said. “Those guys work hard every single day and they’re all itching for a chance to play so any time we can get them on the court, it’s worth it to see their faces out there.”

“We feel good but we’re definitely not done. We still have some climbing to do and a lot to work to be the best team come playoff time.”

This week, the Gauchos travel to Malibu for a Wednesday meeting with No. 9 Pepperdine at 7 p.m. at the Firestone Fieldhouse. Friday, UCSB heads north to play No. 4 Stanford at Maples Pavilion at 7 p.m.