The Daily Nexus
Science & Tech
Science Through the Lens of an Artist
February 11, 2016 at 6:00 am by Natalie Overton

At first glance, the whirling, shimmering zigzags of color seem like a modern tech-art combination — so distant from their roots in the detailed scientific processes that inspired them. These works of art are abstractions of scientific concepts, brought to the forefront of UCSB’s art and science communities by the new Art of Science competition. This program was launched in 2012 as a platform for the intersection of the Arts and the Sciences. The co-organizers of this competition are: Arica Lubin, Jon Schuller and Wendy Ibsen.

Schuller is a professor in electrical and computer engineering here at UCSB, and is currently very much a part of the research world. Ever since graduate school, Schuller was fascinated by the intersection between art and science.

“The contest captures this idea that scientists play around, take these pictures and are inspired by them. It’s not necessarily just a bunch of people standing at a chalkboard solving equations,” Schuller said. “I wanted to find a way to give people an exposure to science that’s different from the normal approach.”

So upon arriving at UCSB in 2012, he hit the ground running with the motivation for the project, and approached Lubin and Ibsen with a proposition.

Throughout Lubin’s scientific career, she has always surrounded herself with the arts.

“I have never let go of the artistic part of me, and I think it’s actually really important in the work that I’ve done as a scientist. I really like being able to be creative in a different way,” Lubin said.

She has left research and is now focused on creating educational programs.

“Art of science is the best of both worlds. I think it encourages researchers to share the imagination that is inherent to their research process with the public audience,” Lubin said. “This forces them to think about ways they can make their research accessible and ways to communicate complex concepts to the broader population.”

She and Ibsen had been talking for a while about how many artistic students studying science weren’t recognized or celebrated.

“Using art or visual imagery to tell the story of complex ideas and new discoveries is a really effective way of explaining your research to an audience,” Lubin said.

The trio started on the project right away. In 2013, before moving to the downtown museum, the first groups of submissions were on display at the UCSB library. The competition is now supported by the California NanoSystems Institute and Schuller’s NSF career award.

Lubin called attention to the psychological benefits of linking the two fields, citing research on Nobel Prize winners and other scientists who were adopted into scientific societies and their record of being involved in the arts. There was a direct correlation.

“Nobel Prize winners actually showed a higher level of artistic ability than did those elected into scientific societies, than did those in the general public,” Lubin said. “If you think about it, when we’re wanting to solve what we see as society’s largest problems, to create new inventions, why wouldn’t we use the majority of our capacity?”

According to Schuller, there is a gap in understanding with no bridge to connect the public to the scientific world in a real way.

“I don’t think most people really have any sense about what it is that a scientist does. It’s more than just in terms of artists and scientists not interacting together. It’s about scientists and the general public. I think this is a nice way to illustrate some of the things that are going on without getting bogged down in technical details,” Schuller said.

For some final words of inspiration, I leave you with Lubin’s reminder: “There’s such emphasis on science and engineering and technology in this very narrow perspective. I think it’s important not to lose sight of what’s created all of those innovations and the discoveries, and allowed our society to flourish the way it has.” 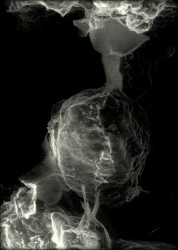 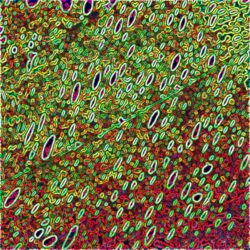 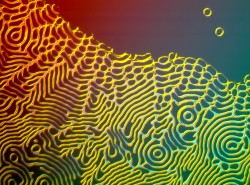 Artist: Preeti Ovartchaiyapong
Title: Ocean Foam
Description: This is an image of polymer diffusing randomly to fill the voids in the nanoimprinting lithography process. The hardened polymer creates interesting abstract textures like ocean foam gliding on the beach. This true-color image was naturally painted by interference of polarized light beams. We got to see this snapshot because the heat treatments during the imprinting had hardened the polymer before it had time to completely fill the voids. As beautiful this may be, this image is just another failed attempt at nanoimprinting 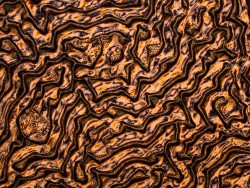 A version of this story appeared on p. 14 of the Thursday, Feb. 11 print edition of the Daily Nexus.

Did not know about this project. Cool read! And so well written as well