The Daily Nexus
Volleyball
Jake and Joe: Dynamic Decade-Long Duo
February 11, 2016 at 5:10 am by Ryan Burns 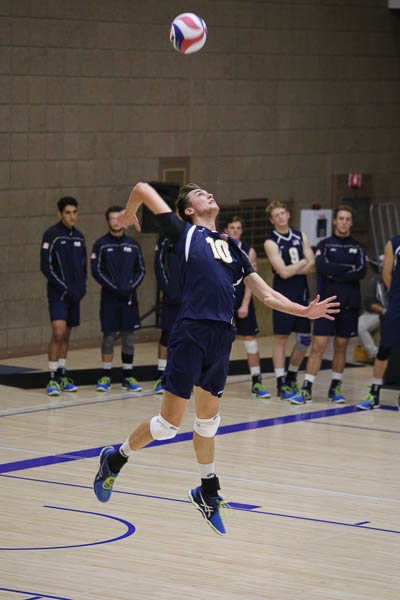 At home against the nation’s top team, No. 1 Long Beach State, in front of the biggest crowd of the year, Jonah Seif sets the ball for another Jacob Delson kill. Delson jumps in towards the team celebrating and Seif hits him on the head, showing his approval with a head nod.

The point put the No. 10 UCSB men’s volleyball team up 22-19 in the fourth set, sealing the set and sending the match into a fifth, but the Gauchos ended up dropping the final set, losing their closest and longest match of the season.

“I think it’s more painful to lose a game like that than to get blown out of the water and get swept,” Seif said. “That match was so physically and emotionally investing, and to have a lead at the end and let it slip away was really frustrating.”

The moment in the fourth set was bigger than a win or a loss, though. The setter and hitter came together to celebrate the latest assist-kill in a 10-year partnership between, as they call each other, Jake and Joe.

Delson, a redshirt junior, and Seif, a senior, first played sports together in sixth grade when they were on the same youth basketball team. The two eventually played volleyball at rival high schools in the Conejo Valley — Jacob at Westlake High and Jonah at Thousand Oaks.

In their senior year, they joined forces when Jonah decided to play for Delson’s club team. The friends insisted, however, that their decisions to commit to UCSB playing volleyball came independent of each other.

“Our senior year, my club team really needed a setter, so I recruited Joe and luckily he came,” Delson said. “I committed really early, one of the earliest in our class. He was looking around for a while and eventually told me on the way back from one of our club tournaments that he was going to UCSB.”

Seif is the consistent setter that has started for the Gauchos every year of his collegiate career. Delson, the passionate outside hitter who climbed up UCSB’s depth chart after redshirting, has become one of the team’s most valuable leaders.

In addition to being two of the most commanding personalities on the court, the pair lead the team in several categories. Seif has made the All-MPSF First Team for the last two seasons and this year he leads the Gauchos in assists per set with 10.29. Along with the senior’s numbers, Delson thinks his setter offers more than just passing to the UCSB squad.

“Jonah always brings energy and it’s great to have someone like that on the court,” Delson said. “Especially after a long point he’ll yell at me to keep me going.” 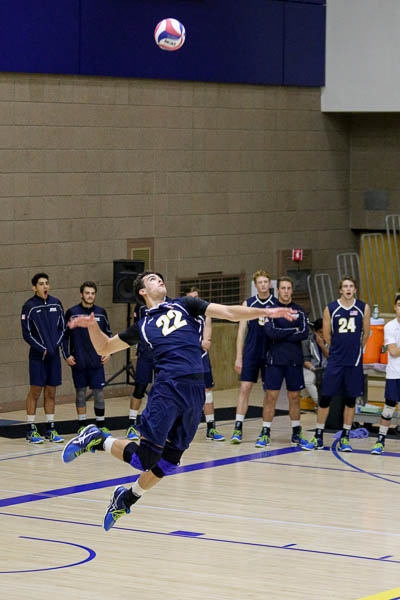 Delson cracked into the starting lineup last year, and has since taken over as one of the key players on both offense and defense. This season he is averaging the second most kills per set on the squad with 2.98 and is third in blocks with .68 per set.

Seif has appreciated playing with his best friend for more than just the statistics. Jacob and Jonah lived together for the first three years of college, creating a connection that extended far beyond volleyball.

“Having someone on the court that you know that well, there’s that off-the-court friendship where you trust each other to make plays,” Seif said. “I always know Jake’s defense will be there and that he’ll score big points.”

After four years of playing together, the friends know each other’s patterns and tendencies as well as their own and have been key members of Gaucho teams the last two seasons. The pair has yet to win any major tournament though, and when asked what they wanted to accomplish before their college careers are over, the two had similar responses.

“A championship. Or at least a deep run — I mean, only one team can win, but to make a late run at the championship would be really cool,” Delson said.

Seif, who is in the middle of his final year with the Gauchos, had a more direct response.

“It has to be a national championship. I’d love to not look back and think that we could’ve done more. If we do lose I want to get beat and not just lose.”

This season Seif and Delson have helped the team earn a couple of impressive wins against No. 5 Loyola-Chicago and No. 11 CSUN. For a deep run into the postseason, UCSB will also have to knock down some of the teams above them in the MPSF standings.

The loaded conference has nine teams in the national top-15, six of which are ranked above the No. 10 Gauchos. By the time tournament season comes around, every match will be a test worthy of a champion.

Jacob and Jonah have some stern tests before they can think about bringing a title home in Seif’s last season with the volleyball program, but what would be a better way to finish this chapter of the decade-old duo?

Next up for the Gauchos is a home meeting with UCSD Friday at 7 p.m. in Rob Gym. The Santa Barbara boys beat the Tritons in straight sets earlier this season.

A version of this article appeared on page 9 of February 11, 2016’s print edition of the Daily Nexus.