The Daily Nexus
Sports Blogs
Battle of the QB’s: Omaha Meets “The Dab”
February 4, 2016 at 5:05 am by Michael Jorgenson and Sean White 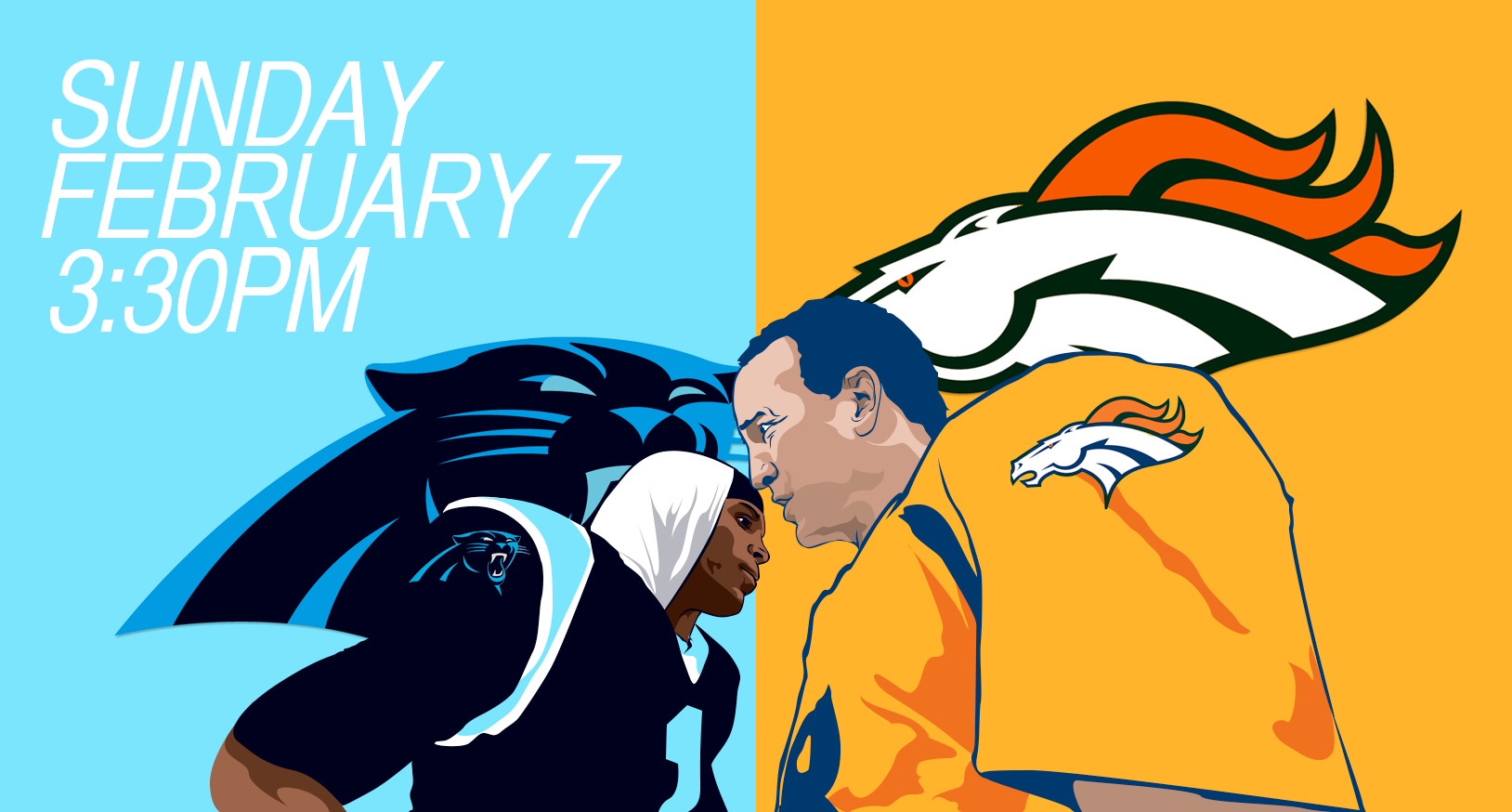 It’s funny how we as sports fans like to put history into perspective.

Ideally, the well-informed fan would be able to watch every play of every game, taking all of a player’s strengths, weaknesses and ability to pull out wins into consideration before making a judgment on who the greatest players are.

In reality, numbers are what the average fan tends to rely on most when telling the “truth” of how great a player is. This tends to be extremely misleading, especially in sports where numbers don’t quite translate to show a player’s true value.

When comparing careers as a whole, we generally stick to one golden rule when talking about what number matters most: rings.

Dan Marino is perhaps the most well-known example in football of how misleading this can be, as the legendary quarterback failed to ever win a ring despite setting just about every passing record there was to set. He would forever be overshadowed by Joe Montana and his four Super Bowl rings, a record for quarterbacks that still stands today.

It’s not hard to see who the present-day equivalents of Marino and Montana are. Peyton Manning and Tom Brady have followed the same storyline as their predecessors nearly to the tee since they rose to prominence in the early 2000s.

Brady quickly took up the Montana role, racking up three rings from 2001-2004 as the Patriots dominated the football world with unprecedented postseason success. Over the years, he has made his own individual marks on the record books, albeit nowhere close to the success Manning has had in that respect. However, a fourth Super Bowl win in 2015 brought Brady into a tie with Montana and Terry Bradshaw for the most ever for quarterbacks, further establishing him as potentially the greatest signal-caller of all time.

On the other side, no matter how well Peyton Manning has done in the regular season, postseason success has almost always found a way to evade him. Whether it’s due to costly interceptions, missed field goals, or freak plays down the stretch, Peyton has managed a 13-13 career playoff record and the most losses of any quarterback, compared to Brady’s magnificent mark of 22-9.

The key difference between Manning and Marino in the playoffs is the fact that Manning did manage to pull off one Cinderella run in 2006, when his Indianapolis Colts defeated the Chicago Bears 29-17 on a rainy day in Miami. Nevertheless, as he continued rewriting the history books and bringing his MVP tally to an all-time best mark of five, Manning still could never find a way to erase the doubts of his greatness.

After all, Peyton’s little brother, Eli, who has never come close in the statistics argument, has two rings of his own; ironically, both having been earned against Brady and the Patriots.

It is too late for Peyton to reach the mark set by Brady and Montana, but this Sunday, his legacy will have everything on the line. Lose, and he likely finishes his career with a 1-3 record in Super Bowls, more evidence for the doubters that more times than not, he failed to get the job done when it mattered most.

Win, and he gets a John Elway-like send off, potentially ending his career on the highest note possible while finally getting that elusive second ring.

Ironically, if Peyton wins that second ring, he would be achieving it during what is by far the worst statistical year of his legendary career.

Just how bad was it? Excluding the 2011 season which he sat out due to multiple neck surgeries, Peyton finished 2015 with the least completions, yards, touchdowns, QB rating and games played of his career. In a game against Cleveland, he broke the all-time record for passing yards minutes before being benched for the first time ever. That was his season in a nutshell.

Although he was on the field far less than we are accustomed to, when he did play, mistakes were in abundance. He averaged 1.7 interceptions per game, the most since his rookie season, when he averaged 1.75.

Luckily for Peyton, he gets one more chance to win a ring thanks to the greatest defense he has ever had behind him, a defense that won the Broncos the No. 1 seed in the AFC despite playing with an inconsistent offense that is still searching for  answers.

Peyton knows better than anyone in this game how defense can win a championship. It was only two years ago that the greatest offensive season in history was demolished 43-8 by the Seattle Seahawks and the league’s top defensive unit.

It’d be a shame to see him go down like that one more time. Fortunately for his fans, he has looked spryer than he has all season in his last couple performances, looking to have put the plantar fasciitis that forced him to miss time behind him.

Whatever happens, this Sunday will be a day to remember in the legendary story of Peyton Manning, football’s greatest student.

Despite becoming the first team to win the NFC South in back-to-back seasons last year, Carolina’s 7-8-1 finish to crawl into the playoffs was not an astounding achievement as each team in the division concluded the season with a losing record.

As part of a mediocre division along with the losses of No. 1 Wide Receiver Kelvin Benjamin to a torn left ACL and a farewell to nine-year veteran Halfback DeAngelo Williams, ending the Panthers’ coveted dual-threat rushing attack alongside Johnathan Stewart, many were convinced that a lackluster season was in store for Carolina.

But just like the fearless superhero he has constantly portrayed himself to be, the heroic breakout season of Panthers’ Quarterback Cam Newton has amazed the entire National Football League with his incomparable play on the field to help the Panthers finish with a 15-1 regular season record.

With “Super Cam” at the helm, it may not be too early for Coach Rivera to consider which finger he will have fitted for his second Super Bowl ring. Yet, it can be assured that the primary objective is earning Carolina its first of the famed piece of jewelry.

The same applies for Newton, who is in search of his first Super Bowl ring and has helped guide the Carolina Panthers to their second Super Bowl appearance in franchise history. While a Panthers-Patriots rematch of Super Bowl XXXVIII would have made the headlines ever more intriguing for Sunday’s game, the opportunity to see Newton play on the game’s most remarkable stage is just as fascinating.

He set regular season career-highs in passing touchdowns and passer rating with 35 and 99.4 percent, respectively, while throwing a career-low 10 interceptions. Newton complemented his attack through the air with his rushing abilities as well, registering a career-high 8.2 rush attempts per game while collecting 636 yards and 10 rushing touchdowns.

While it’s inevitable to dislike the charismatic celebrations and giveaways of footballs to children in the crowd after scoring a touchdown, there remains a lack of attention to the level of proficiency he has consistently played with all season long.

Specifically, his reliability in the Panthers’ redzone trips on offense have been overlooked. He ranked third in the NFL during the regular season when in opponents’ redzone, throwing for 26 touchdowns and zero interceptions. Nonetheless, Newton has performed best in the fourth quarter of games, registering a 64.3 completion percentage and a 110.4 quarterback rating.

Just like the calm, cool and collected persona that the QB displays, he has been a vital element in the Panthers’ success on third down helping to extend offensive drives. Carolina’s 42.4 third down conversion percentage ranked seventh in the NFL during the regular season. The Panthers’ offense has increased their efficiency when facing possible three and out situations in the postseason now at a 55.2 percentage.

If I had the privilege of voting for this year’s MVP it would be in favor of Newton, however, I remain a firm believer in the old adage that ‘defense wins championships.’

Though Carolina ranked a few spots lower than Denver in total defense, pass yards allowed and rush yards allowed, the Panthers’ mastery of takeaways provides the best balance to their dynamic offense.

Carolina led the NFL with a plus-20 differential between its takeaways and giveaways. Its defense led the league with a total of 39 takeaways while also garnering league-highs in interceptions with 24 and fumble recoveries with 15.

Leading the Panthers’ stout defense is three-time First Team All-Pro Middle Linebacker Luke Kuechly. Assisting in either run defense or pass coverage alongside veteran linebacker Thomas Davis, it is Kuechly’s versatility that makes him such a challenge for offenses to gameplan against.

Supporting Kuechly and the rest of the linebacking core are the members of “Thieves Ave”— the Panthers’ secondary. Led by arguably the best defensive back in the NFL in Josh Norman, the crew is responsible for 15 of the team’s 24 interceptions with safety Kurt Coleman’s seven being tied for the most in the NFC.

Although Peyton Manning has yet to throw an interception this postseason, the time shall come once he squares off against the Panthers’ defense. Carolina’s defense is predicated around the foundation of takeaways, having already recorded six interceptions and two fumbles in two playoff games.

In addition to Manning throwing at least one interception in each of his three previous Super Bowl trips, there has been just one season in which Peyton has threw less than 10 interceptions.

That lone season ended with a Super Bowl victory over the Chicago Bears with the Indianapolis Colts during the years of 2006-07. Certainly I’m not inferring that the Broncos can’t win because of this statistic, yet the Panthers’ ball hawing defense may be able to prey upon Peyton’s weakest element which could end with Carolina bringing home the Lombardi Trophy.

A version of this article appeared on page 12 of February 4, 2016’s print edition of the Daily Nexus.