The nostalgia of being a conference contender has lingered for the UCSB women’s basketball program over the last two seasons, having amassed an overall record of 10-49. Yet, first-year Head Coach Bonnie Henrickson and the Gauchos have shocked many to open the Big West schedule, currently sitting in third-place in the conference standings. 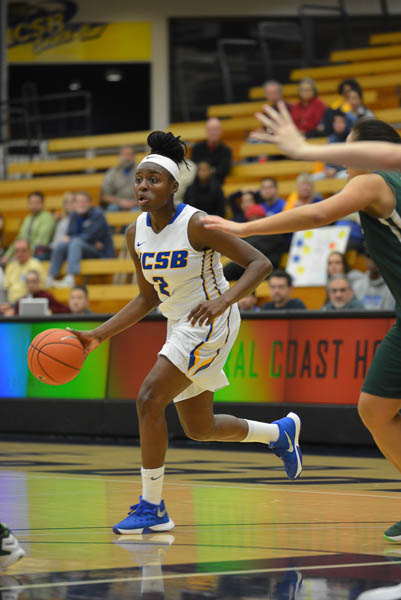 A pair of wins at Cal State Northridge and Cal State Fullerton this past weekend uplifted UCSB to 3-1 in Big West play, its best conference start since a nine-game winning streak in its 2008-09 season. Santa Barbara’s 65-47 victory against the Titans was their first road win of the year. In addition, their 65-49 win over CSUN helped UCSB achieve back-to-back conference wins for the first time since the 2012-13 season.

UCSB is now 6-12, 3-1 in Big West action and has won five of its last six games. Northridge has now lost seven consecutive games, falling to 2-15 overall and 0-3 in conference play following losses to Hawaii and UCSB. Fullerton also sits at 2-15, 0-3 in the Big West after losses to UCSB and Cal Poly, extending its losing streak to 15 games.

The Gauchos’ ballhandling over the two games was most valuable as they finished with a season-low 10 against Fullerton to end their six-game streak of 20-plus turnovers. They followed this performance with a second-best total of 12 at CSUN.

Santa Barbara’s 42.9 three-point percentage against the Matadors marked the third time over its six-game span in which it shot over 40 percent from beyond the arc. It was a shooting clinic for the Gauchos in the first quarter of Saturday’s game as they went 5-6 from three-point range.

After an early 6-2 lead to open the quarter and an eventual 9-9 tie, the Matadors would go on to trail for the remainder of the game. The abundance of perimeter shots helped UCSB put together a 22-4 scoring run to close out the quarter with a 31-13 lead.

A total of four different Gauchos drained at least one three-point attempt during the run with freshman guard Coco Miller, going 2-2 from long range for her only three-point field goals of the game to finish with 12 points and tied her career-high in steals with a game-high five.

Another one of those Gauchos was senior guard Jasmine Ware. In just 23 minutes of play, Ware scored a game-high 17 points off the bench on an 8-11 shooting effort to go along with three assists and four steals.

Santa Barbara continued its run in the second quarter with a 7-2 scoring stretch to begin the quarter, forcing a Northridge timeout. CSUN’s 12-4 run led to it trailing 27-45 to enter halftime.

Despite being down for the entirety of the game, CSUN’s advantage on the boards helped it to remain in the game. It outrebounded UCSB 40-31 as freshman center Channon Fluker recorded a game-high 15 rebounds and guard Cheyenne Allen finished with 11.

The closest Northridge came within UCSB’s lead was a 12-point deficit of 42-54. Helping CSUN in its comeback attempt was junior guard Emily Cole. Responsible for two of the Matadors’ total of three perimeter shots in the game, Cole led the Matadors in scoring with 14 points.

Still, CSUN’s edge on the glass would not be enough as UCSB’s consistent scoring offense ended with a 45.8 field goal percentage versus CSUN’s 35.8 shooting percentage. Along with Ware and Miller, sophomore guard Makala Roper (10) and junior center Je zhe Newton (11) finished with double-figures in scoring as UCSB secured its 65-49 victory.

It was a solid outing for Newton after having her best performance of the season at Cal State Fullerton on Thursday. She set a season-high in scoring with 15 points against the Titans, tallying her third-straight game with double-figures. Newton also had seven rebounds and three blocks on the night.

It was a quick start to the game by Fullerton, opening with a 5-0 scoring run for the lead. At the helm of the Titans’ swift start was freshman forward Michelle Berry and freshman guard Jade Vega. In spite of her inefficient shooting (6-23), Berry earned a double-double with 14 points and 11 rebounds while Vega finished with 11 points.

However, UCSB responded with a 5-0 run of its own to tie the game up. A 22-13 lead was the Gauchos’ largest lead of the first half, but CSUF persevered with an 8-0 run as UCSB managed to maintain a 26-24 lead at halftime.

UCSB held Fullerton to a 32.7 field goal percentage on the night. Most importantly, it limited the Titans’ three-point shot as they shot 27.8 percent from long range. The Gauchos’ defense enhanced their offense as they ended the game shooting 49 percent from the field. Notably, their 58.3 field goal percentage in the second half enabled them to take a substantial lead.

Santa Barbara outscored Fullerton 39-23 in the final two quarters of the game. It was a breakout half for Ware as she scored 11 of her 13 points in the latter portion of the game on 5-8 shooting. Roper made half of the Gauchos’ three-point field goals to finish with 13 points as well.

Unable to establish a perimeter presence, Fullerton’s offense was out of sync and could not prevent UCSB from scoring as the Gauchos cruised to a 65-45 win.

UCSB will attempt to end UC Davis’ undefeated conference record (3-0) as it will face the Aggies on Thursday, Jan. 21 at 7 p.m. in the Thunderdome.